How to (appropriately) use emoji at work

My editor Deb loves to ruin things. One time she used her Ph.D. in Italian to ruin an entire emoji. 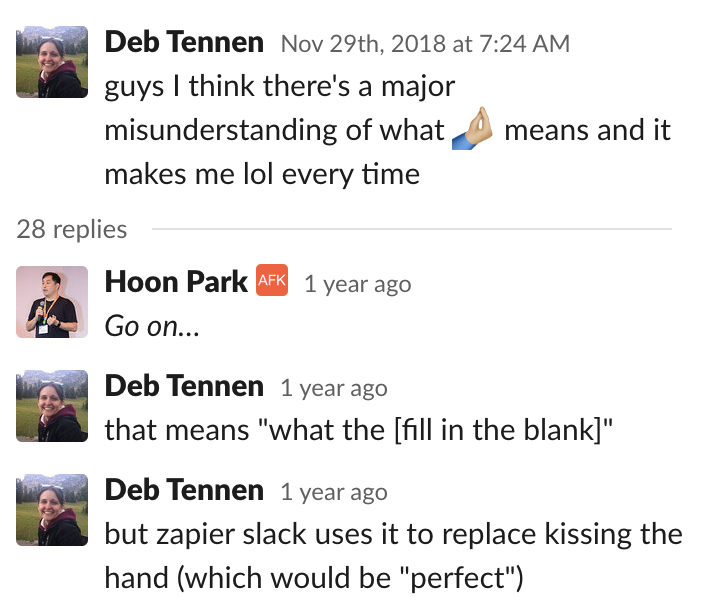 The emoji in question is a common Italian hand gesture that, roughly translated, means "what the hell?" This isn't how our team was using it. At some point, we collectively decided to use this emoji to mean "perfection."

From what I can gather, people thought it represented kissing your fingertips, the way chefs sometimes do.

Dozens of people used the emoji this way until Deb pointed out the (hilarious) discrepancy. And you know what? Some people still use this emoji to mean perfection. They will probably never stop.

This is a harmless example, but it does point to the inherent ambiguity of emoji—and communication in general. Symbols only have meaning because of a shared cultural context, which means you can't assume everyone is interpreting emoji the same way. That can lead to some awkwardness—especially in a work context.

Once upon a time emoji were considered too informal for work communication, but that time has long passed. We think they're essential, particularly in team chat apps like Slack. Why? Read about how we use emoji at Zapier to learn more.

Maybe don't wink at your coworkers

Consider the 😉. Some people wouldn't think twice about using this emoji in a work context; others cringe at the very thought. There's a gulf in meaning here, just like with the Italian hand gesture.

To some, the wink emoji is a harmless way to clarify that a statement is intended as a joke, or at least intended to be friendly. And there's a lot of precedent here. The winking emoticon—;)—was used this way for decades on Usenet and IRC. It's natural that internet veterans want to use 😉 the same way today.

The problem: that's not how everyone understands this emoji. According to numerous sources from around the internet, the wink emoji implies you're being flirty and/or suggestive. Some people will reflexively interpret any and all 😉 usage in this manner, which is going to radically change the context of any statement you make using it. The best case is that you'll come across as oblivious. Worst case...well, I don't think I have to explain why this is problematic in a work context.

You might disagree with the second interpretation of 😉, and that's understandable. It's also kind of my point: we're all interpreting emoji differently, and that can lead to confusion. But it's not everyone else's job to figure out what you mean.

Take it from a writer: you can't control how other people are going to interpret your message. You can only control what message you send in the first place. To quote the philosopher Jeff Probst: "Perception is reality."

The wink is far from the only confusing emoji. Here are a few other examples, off the top of my head: 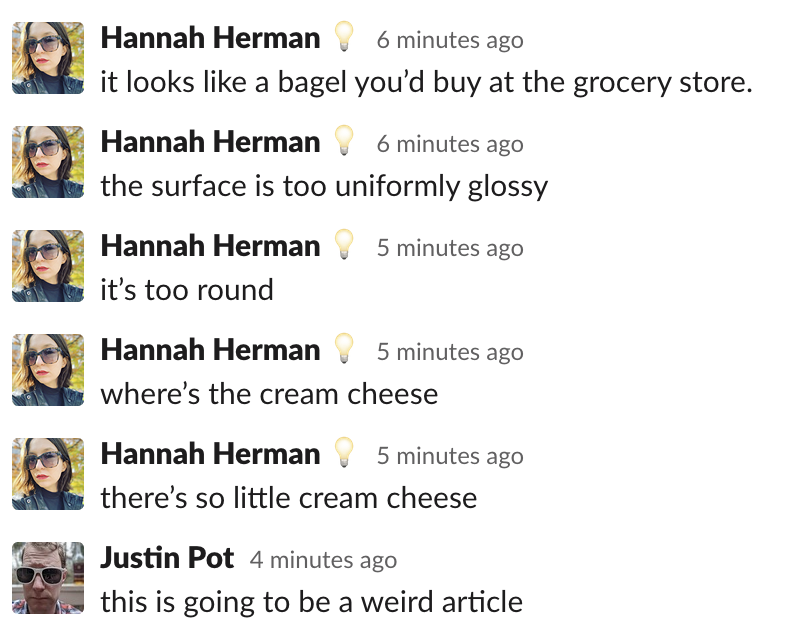 I could go on. The point is that emoji, like any symbols, have different meanings in different contexts. Effective communication depends on understanding that—especially when you're working remotely.

There are three sides to every statement

Communication, in theory, is simple: you say something, and the person you're talking to understands it. But that's not how it actually works. In reality, every time you communicate, you immediately create three distinct statements:

If this sounds complicated, that's because it is. There's a reason robots are so bad at convincingly talking like a human person—conversation is staggeringly complex. There is so much nuance to every word choice—and to every emoji choice. Most of the time, humans manage this without any problem, which is pretty amazing when you think about it.

But every once in a while, confusion creeps in, which is only natural. We're all making this up as we go along, after all, and communication is also a skill that you have to practice. Part of doing that online means understanding what emoji mean in various contexts.

If you're ever uncertain about something:

Remember: we're all making this up as we go along. There's no shame in not knowing. Just try to keep learning.

Hero image by iabzd from Unsplash.