Slack vs. Discord: Which should you use?

Comparing Slack to Discord doesn't, at first glance, make sense. It's apples to oranges—or, more accurately, conference room to arcade—in terms of branding. I mean, look at the homepages:

Slack is all-in on business. Discord, historically branded as a gaming tool, these days aims to serve online communities more generally. Not exactly overlapping categories, right? Peel away the branding, though, and these two apps aren't so different. They even look similar on the inside. 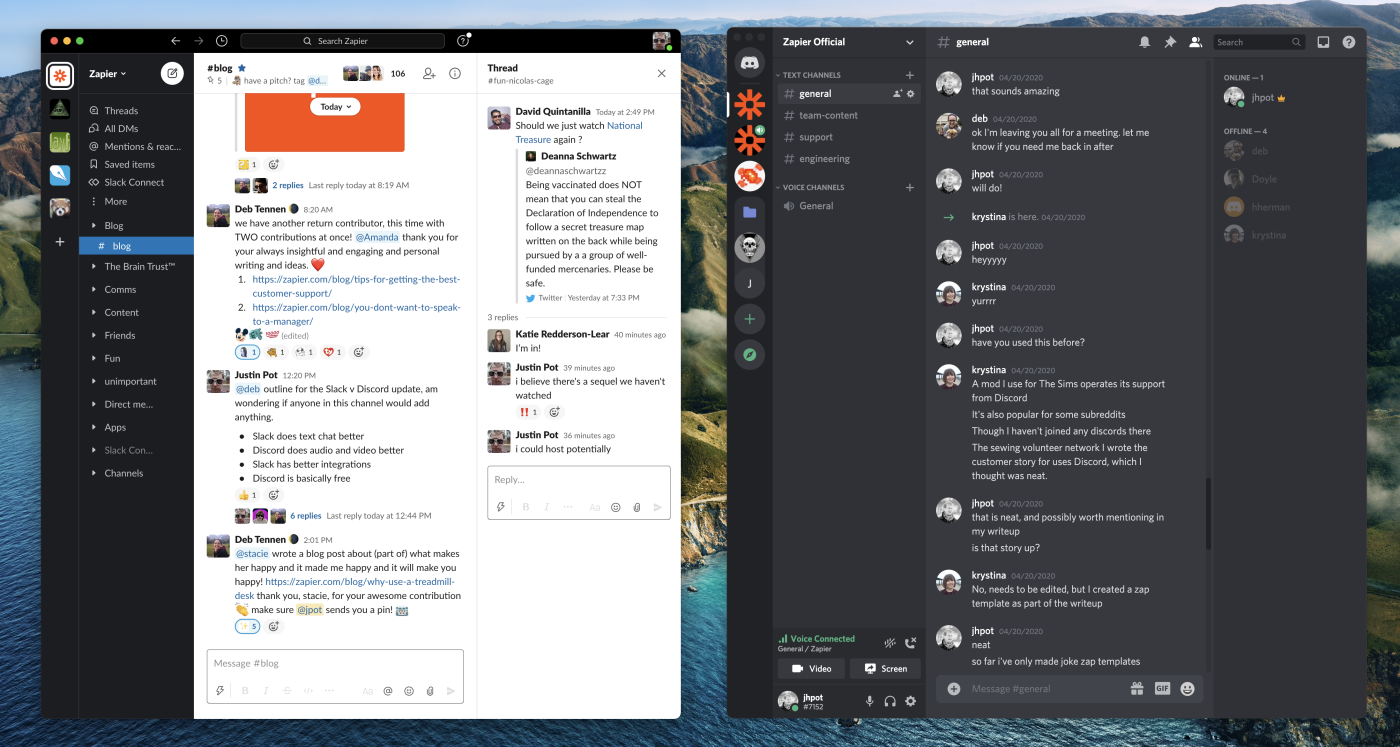 Both have a left sidebar full of icons, depending on which group of people you want to talk to. Beside that is a list of channels, then the current conversation, and a right sidebar. It's uncanny.

The similarities continue. Both offer teams the chance to set up multiple channels for text conversation. Both offer video and audio calls. And both are used by millions of people every day, which is part of why they both made our list of the best team chat apps.

Use automation to support brainstorming, delegation, and communication
Learn how

So, I understand why people might think these apps are interchangeable—to an extent, they are. There are plenty of online communities that happen on Slack, and some people use Discord for business. There is overlap.

But these apps aren't interchangeable. They have different strengths and weaknesses, which reflects their designers' priorities. Let's break those down and talk about what makes sense to use in which contexts.

Text chat seems simple enough. You type something, you press enter, then your team can see it. And that's true, but put a bunch of people in a chat room, and things get disorganized quickly. Both Slack and Discord clearly have this in mind, but Slack seems just a bit more focused on keeping things organized—particularly if you're working on a large team.

Discord has been catching up on this lately—adding threads is a big step. But there are still a lot of little quality-of-life things that Slack does just a little bit better.

And it's not just text—this extends to other features. Discord users can't upload files larger than 8 megabytes (MB) on the free version (or 50MB if they're paid users). Slack's free version limits users to 5 gigabytes (GB) of free storage overall, with no limit on individual file size. Slack, in this way, works better for quickly sharing files.

I could go on. Slack has all kinds of little chat touches that Discord lacks. One of my most read articles is about how to bold on Discord because Discord doesn't do anything to help people learn how its formatting works. Slack has obvious formatting buttons. There's just more attention to detail on Slack when it comes to text chat.

This isn't to say that Discord is unusable. Slack just has more polish, and that gives it an edge in this category.

Discord does audio and video better

Slack offers video chat. A lot of their customers pay for Zoom. How much more do I really need to say? Audio and video calls simply aren't one of Slack's strengths.

Discord, however, excels on the AV front. Audio channels are what Discord built its reputation around. Gamers left the service running in the background on their computers, so they could talk to each other while playing online games. It's important for audio chats to have very little lag in that context, and Discord delivers—Slack, meanwhile, is lacking on that front. Discord's sound quality is also much better, and there are all kinds of options Slack lacks. You can adjust the volume for everyone in the conversation, for example.

Until recently, there was a different philosophy here, but the two apps are converging. Discord offers dedicated audio channels, which users can turn on and off whenever they want. It's less like a call and more like a room you stop by in. This is perfect for gaming and general hanging out, but it's also a great co-working tool. People can stop by and leave as they like, and there's even video and screen sharing. Slack recently launched a new feature called Huddles that's very similar to Discord's always-on audio channels and can largely be used the same way.

Both services also offer something more like traditional phone calls, with video and screen sharing. In my tests, Slack works a lot less reliably, which is probably why so many of our customers connect Slack to Zoom.

Slack has better integrations (but you can work around that)

Slack offers thousands of integrations with all kinds of business applications, from Google Drive to Zoom to Twitter. Discord doesn't really offer official integrations, relying instead on bots built by third parties. These tend to be focused less on getting work done and more on building communities, which again makes sense given each app's target market. But if you rely on native integrations with SaaS apps, Discord probably isn't the best fit.

There are workarounds, though. You can build a Discord bot using Zapier, for example. Or you can use Zapier to connect Discord to any of the other apps you use, allowing you to build just about any Discord integration you can imagine. You could, for example, find out when there are new posts on a Twitter page or RSS feed or when a new YouTube video is posted. But you could also create more work-related workflows, like alerting you when a meeting is about to start or when a new task has been added to your project management tool.

There's also nothing stopping you from building your own Slackbot, while you're at it.

Here are the best automations for Slack users.

Companies have more control over Slack

Slack is built with workplace administrators in mind, who own the workspace and enforce their own rules. The company owns the Slack, basically.

Discord is closer to a public website, like Reddit. It's built with community moderators in mind, and there are Discord-wide content policies and enforcement. Put simply, companies running a Slack are in control. Discord moderators aren't—at least, not to the same extent.

This extends to how direct messages (DMs) work. Slack DMs occur within a specific Slack instance, even if you're messaging someone outside your organization. The company that owns your Slack instance potentially has access to those DM records. Discord DMs are system-wide, not unique to a particular server, meaning a business that uses Discord is much less in control, and has a worse legal case for DM access.

This makes sense, given the difference in target market and philosophy. It's just worth keeping in mind.

Discord is basically free, while Slack's free version is limited

Pricing is another example of Discord being community-minded and Slack being focused on organizations.

Running a Discord server is free and comes with basically all features. Individual users can pay for Nitro and unlock a few goodies, like more custom emoji and bigger upload sizes. Individual users can also opt to give boosts to servers, which unlocks more emoji slots and animated server icons. It's very much on community members to donate these perks, if they want to, and the differences are largely cosmetic.

Slack couldn't be more different. The free version lacks many key features. Most notably, the message archive is limited to the most recent 10,000 messages. There's no way for an individual user to upgrade—the admin has to pay, and the price is per user. Standard, the cheapest tier, is $8 per user per month. That adds up quickly, especially for an online community. This kind of pricing is probably only sustainable for businesses.

Slack or Discord: Which should you use?

Given these differences, which service should you use? Honestly, I think you should trust the branding (and this is coming from someone who does not, as a rule, trust branding). Discord is ideal for online communities, while Slack is better for businesses. It's just what they're built for.

This isn't to say you can't mix it up. You can absolutely host an online community on Slack, particularly if you're fine with only having an archive of the 10,000 most recent messages. And you can use Discord for business, if you're willing to work around some of the limitations. These tools aren't interchangeable, exactly, but they have enough similarities that you have a choice to make. Just keep the differences in mind.

This article was originally published in June 2019 by Dane O'Leary.