It's the simplest to-do list app, hidden behind a button in Gmail and Google Calendar. And yet, Google Tasks is one of the most popular to-do lists thanks in part to that simplicity. You don't always need a full project management system to keep track of your work. Sometimes, simpler is better.

Imagine a paper to-do list with a checklist of things you need to do. Perhaps you'd indent some tasks that are part of a larger task; maybe you'd scribble a quick note under a task with more details, or write a due date beside critical tasks.

Digitize that simple to-do list and you've got Google Tasks.

It probably helps, of course, that Google Tasks is built into Gmail and Google Calendar—even if it's a little hidden. Here's how to find Google Tasks—and how to get the most out of it.

Where is Google Tasks?

Google Tasks is built into Gmail, and that's probably the easiest place to get started using it. Just click the Tasks icon in the right sidebar.

After a brief animation, you'll get a new Google Tasks account.

Or, if you're on the go, Google Tasks is on mobile, with full-featured iOS and Android apps. Honestly, the mobile version is a simple option for mobile, even if you don't use Gmail. 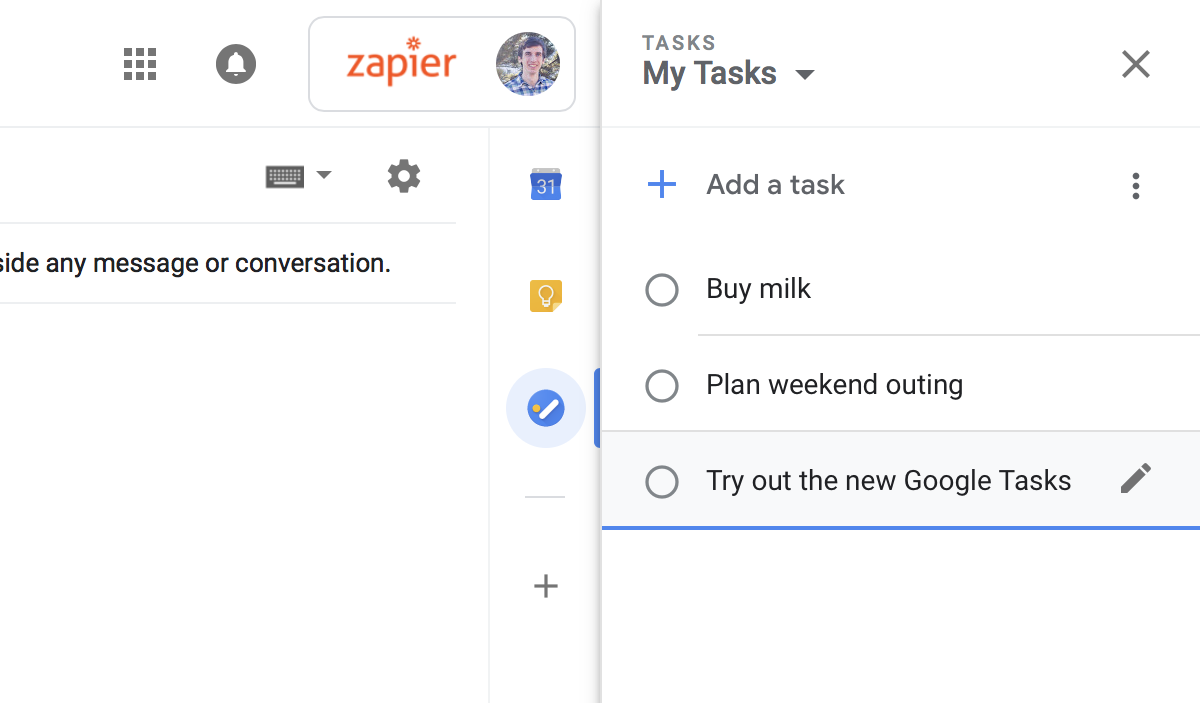 Open Google Tasks in the Gmail sidebar, click Add a task toward the top, and type in your task. Press your enter key to save the task and you can instantly type in another task. Need to edit a task? Click on it to select or edit text right in the list. 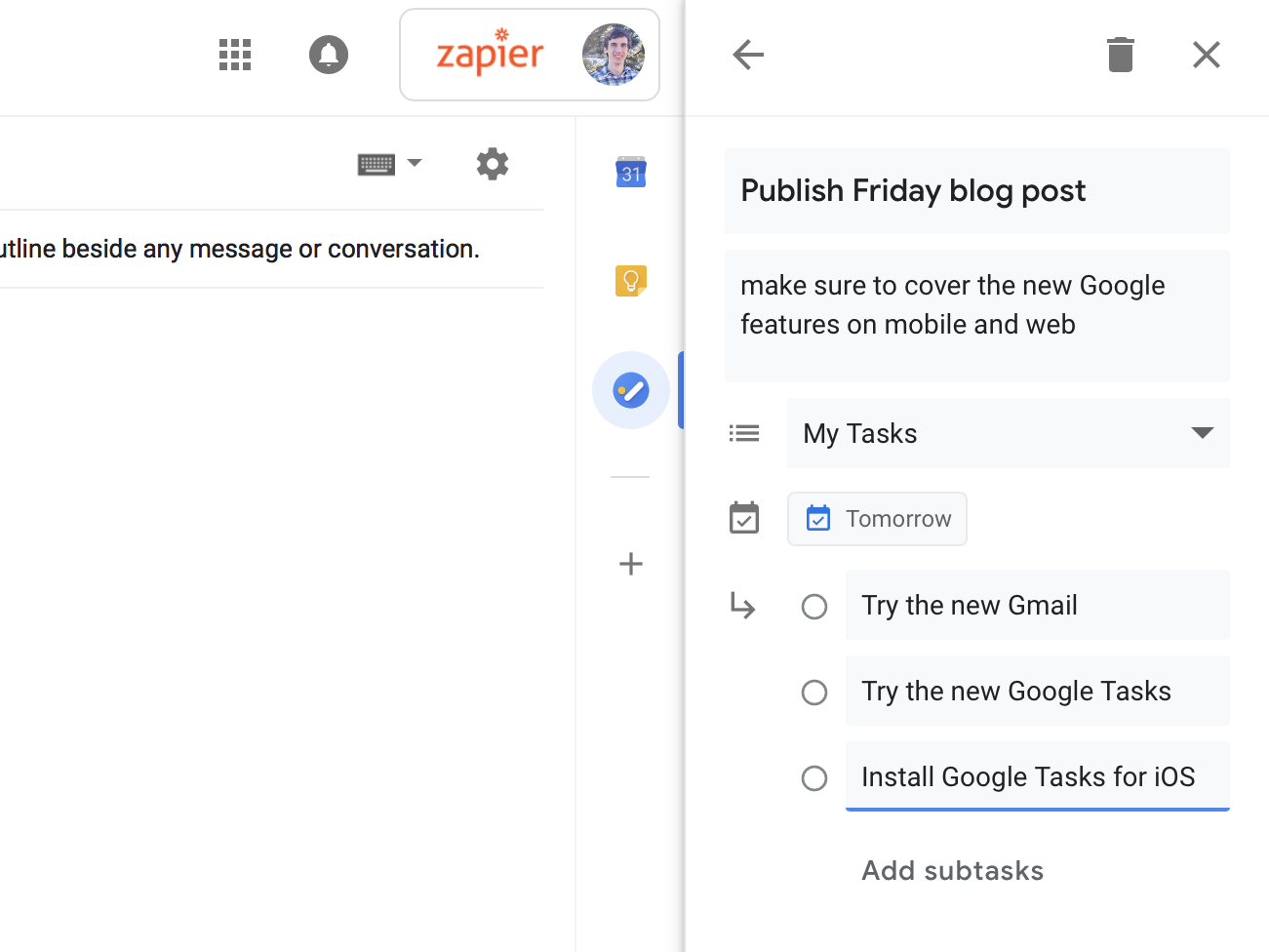 Or you can add more details to tasks from their Edit view. Press Shift+Enter when saving a task to see its edit view—or click the pencil button beside the task. There, you can add a description, due date, or subtasks. You can also move it to a different list—more on that later.

You won't be able to add tons of details, granted, but it's enough features for most people.

Aside from its simplicity, Google Tasks' best feature is its deep integration with Gmail. Your inbox isn't the best to-do list—so Google Tasks gives you somewhere to list those important messages that need a reply or action on your part.

Drag an email from anywhere in Gmail to the Google Tasks sidebar to instantly turn it into a task. It'll keep the email's subject as the task name, with a link to the email underneath. You can then archive or move the message and still open it easily from the Google Tasks link.

Much like a paper to-do list, the most direct way to use Google Tasks is to jot down basic things you need to do and check them off as they're completed. But if you'd rather plan, rearranging your tasks into the order you should complete them, you can do that too. Just click on a task and drag it to the order you want. Move a task with subtasks? Just drag to move the whole set together. Or, if you decide a subtask should be its own task, drag it out, and it'll turn into a standalone task.

Keyboard shortcuts work here too: Select a task, then press alt+↑ or ↓ to move the task around.

Need to see upcoming tasks first? Click the three-dot menu and select Sort by Date to group your tasks by their due date, with the tasks due soonest at the top. Open the menu again and select My Order to get the tasks back in the order you dragged-and-dropped them. 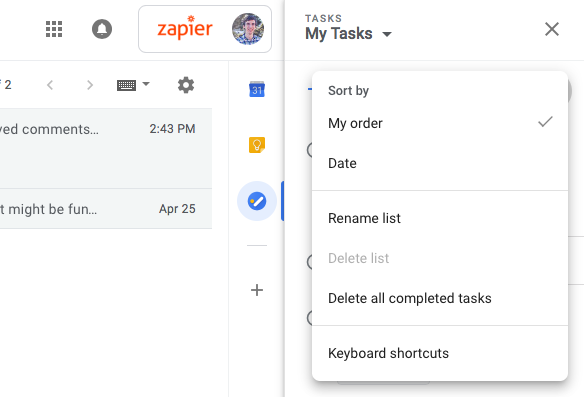 There's one more way to sort tasks: Lists. When you first open Google Tasks, it will start a new My Tasks list and put all of your older tasks in a list with your name. Click the My Tasks (or other list name) button at the top of Google Tasks to select the list you want or add another. 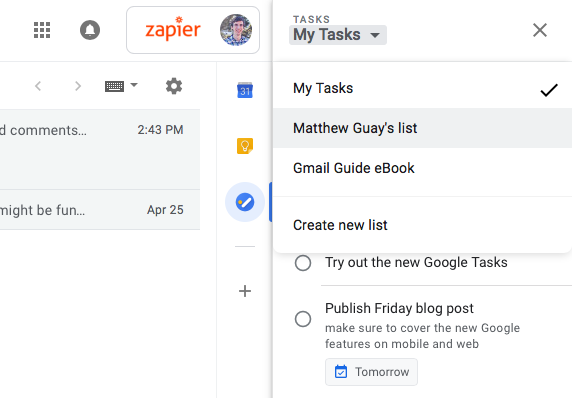 To move tasks to a different list, open their edit view and select the list you want.

It's fun to drag emails over to Google Tasks and move your subtasks around, but the fastest way to manage Google Tasks is with your keyboard. Here's a list of the most useful shortcuts for reference—or you can find them anytime in Google Tasks by pressing Ctrl + / on Windows or Command + / on Mac:

Use Google Tasks apps to manage tasks on the go

Your phone might be the handiest place to keep a to-do list, since you probably always have it on you. Google Tasks' mobile apps are perfect for that.

Install Google Tasks on your iOS or Android device, and if you've already signed in to any other Google apps with your Google account, Google Tasks will pull in your to-do lists automatically. It works much the same as in Gmail. Tap the Add a new task button to type in a task, then tap the task to add a due date, description, or subtasks. Then tap-and-drag tasks to arrange them as you'd like.

As with most other mobile to-do list apps, Google Tasks can notify you when tasks are due. You'll never forget your important tasks even if you don't open Gmail.

Google Tasks is a simple to-do list—but with lists, subtasks, and mobile notifications, it has the basics you need to stay productive and keep track of the most important things you need to do.

And with Zapier, you can do even more with Google Tasks. Zapier's Google Tasks integrations can add new tasks and update existing ones automatically—or create new lists and fill them with tasks as an easy way to start projects. Or, Zapier can watch your Google Tasks lists for new or completed tasks and start workflows around your tasks.

Explore some of the most popular Google Tasks integrations. In the meantime, here are some ideas to help you get started.

Create tasks from other apps

Add Google Tasks from new notes in sections on OneNote

Simplify your to-dos with Google Tasks

Sometimes a simpler tool is what it takes to keep you productive. If you wanted a simpler, back-to-basics to-do list app or wish you could get your tasks out of your inbox and into something more manageable, Google Tasks is a better tool than ever to handle it.

And with a bit of list organization and automation, you can turn it into the tool that tracks everything you need to do.

See how Google Tasks stacks up to other apps in our roundup of the best to-do list apps.