How many abandoned to do lists do you have? I'm talking about apps you've installed, added some tasks to, then promptly forgot to actually use. Abandoned bullet journals and sticky notes you never look at also count.

You tried to implement a system. It didn't work. And now you feel guilty about it. But I'm going to propose that this is not your fault.

Why do we abandon systems? Because they aren't working for us. And that's okay. When it comes to task management the important thing isn't which system you use, it's finding, testing, and refining a system that works for you.

Why You Need a System

Your brain, if it's anything like mine, is a swirling vortex of chaos. In my case, most of the debris is garbage: dumb things I said in high school and should probably apologize for, Pokemon trivia, or a catchy song I heard five months ago.

Some of the stuff that's whirling around, however, are things I need to do.

And that causes anxiety, because it's impossible to keep track of everything when I know my brain is inevitably going to drift back to Baby Shark (at which point I will forget absolutely everything else.)

This is why a to do list is helpful. You can pluck out the relevant bits of brain junk, put it in a tidy list, then actually do the thing that you need to do. But making a list isn't enough: you need to review the list regularly in order for it to be useful.

This is where systems tend to break down. We add things, but don't review the list. Part of this is trying to use a to do list app or system that doesn't fit with your workflow.

How to Find a To Do List That Works For You

Everyone works in different ways, which means that everyone keeps track of their work in different ways. This is why there are so many to do lists applications. Task management is intensely personal. A system that works for me isn't going to work for you. Todoist doesn't work for me but several of my colleagues swear by it. This is why I've had to find my own system.

I've spent the better part of the past three months testing and writing about to do list apps, and I've come to a conclusion: There are lots of different to do list applications because no one app will work for everyone.

Some people need nothing more than a list and find features beyond that to be visual clutter. Some people utterly depend on arranging tasks into projects, sorting the project using headers, and adding sub-tasks to every task. Some people live by due dates, to the extent where they need a to do list to basically be a calendar. Others ignore due dates entirely, preferring to set priority levels. And some people combine everything.

Emphasizing one of these things means, by necessity, downplaying another. For example, OmniFocus offers just about every feature you can imagine. 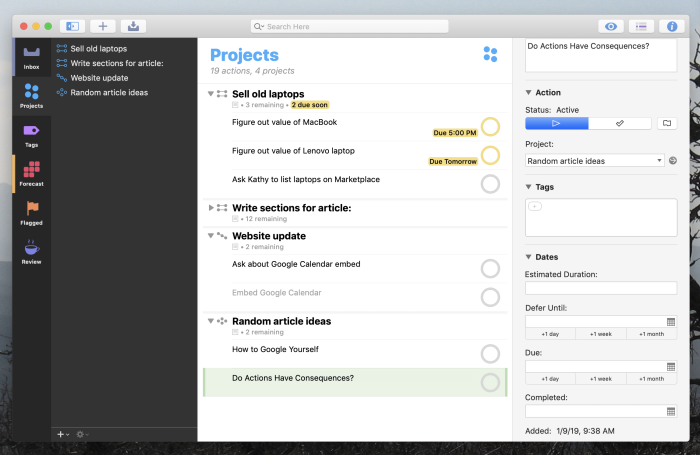 Some will see this as exactly the kind of flexibility they need to organize tasks; others will see all of the options as clutter that gets in the way of actually doing stuff.

Apple's Reminders goes in the other direction, offering lists, due dates, and basically nothing else. 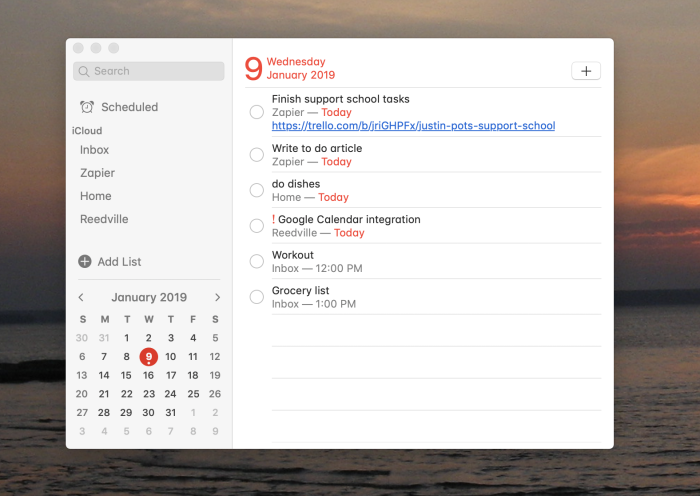 Some will find the lack of other organizational options limiting; others will appreciate being able to quickly get lists down onto paper.

These are just a couple of examples. Every to do list application prioritizes elements to varying extents, and I don't think it's possible for one application to combine everything into a single application that works for everyone.

Which is why it pays to take the time to try a few different applications out. We've outlined the best overall to do list applications alongside lists for Windows, Android, iPhone and iPad, and macOS. Try a few different systems out, paying attention to which organizational strategies make sense to you and which amount to nothing more than clutter.

My colleague Melanie went over choosing a to do list app, breaking apps down into a few categories. If you’re a visual thinker Kanban-style apps, which arrange tasks in columns, will work better for you. If you like fine-tuning systems you should consider GTD apps. Or, if you want to keep things simple, use a straight forward grocery list app.

Figure out what works best for you, then stick with it for a week or two. If you found a system that works, great! Keep using it. If it doesn’t work, however, don’t give up on finding a system: There is one right for you. You just need to keep trying.

The Other Option: Build Your Own To Do List

Deb, one of my colleagues here on the Zapier blog, thinks that Google Sheets should be your to do list. She built a system for herself from the ground up, and it works for her. 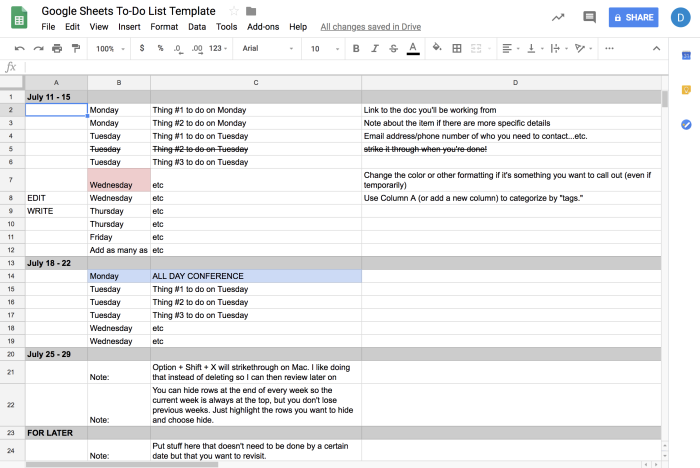 I personally use a plaintext file as my to do list, thanks to todo.txt. I even set it up so today's tasks show up on my Mac's desktop, using Übersicht and a widget.

And there are other possibilities! Many people use Trello, outlining tasks in cards and dragging them to a "Completed" column throughout the week. Others use note taking apps like OneNote or Evernote for the job. I even know a few people who used Coda to build their own to do application from scratch.

The specific tools don't matter: What matters is that you find some way of organizing tasks that your brain won't reject. Take the time and find something that works for you and you'll eventually find something that sticks. It won't calm all the swirling chaos in your mind, and it won't get Baby Shark out of your head. But it will help you stay on top of things, which means it's worth the effort.