Steal This Workflow: How to Save Hours Every Week with Webhooks

You’ve seen them hiding in your app’s settings, promising to send notifications, sync data, and connect to other software you use. Webhooks. They’re the mysterious extra in so many apps. But what are they, how do they work—and why do they have such long, confusing URLs?

You have a letter—the webhooks payload. You address it—that's the endpoint URL. And the carrier—Zapier, in this case—picks it up and delivers it for you.

A webhook takes information from one app and sends it to another. They look complicated, with long confusing URLs and cryptic descriptions, but they're basically a quick way to send contacts, tasks, notes, and more information between apps.

To get you even more comfortable with webhooks, we've put together a simple guide to webhooks. If you aren't familiar with webhooks, this writer encourages you to take the time to read and dig in to the piece (I did) or check out our video below.

To answer that, we spoke to four users of our automation platform, Zapier. These folks use webhooks in their day-to-day processes, with simple or complex Zaps—our term for one of our automated workflows. Whether to manage leads or send emails or post on social media, webhooks play an integral role in automating the tedious.

Some of these users had never used a webhook before they found Zapier. Others knew how to code and had used them in custom apps. But by bringing Webhooks by Zapier into their workflows, these companies cut out hours of manual work every week. Some even reduced the time they spent on a task by 75%.

We'll take you through how these different companies take advantage of webhooks and how you can add them into your own workflows to be more efficient and productive every day.

Manage Projects and Notifications with Trello, Slack, and Webhooks

Sometimes, every possible feature in an app—big or small—isn't available through the app's integration or API (the tool that links apps together). You might've guessed by now, but this is one situation where webhooks save the day.

Mobile messenger and marketing automator MOBIT ran into a few instances where the feature they wanted wasn't accessible from the API. Most of the time, that's just an annoyance, something to work around. But for MOBIT, it was more than that:

"We have about sixty active Zaps that automate all aspects of our business," explains Liam McDonald, CPO and Automation Engineer at MOBIT. "They touch all points of our work."

"It would be impossible to manually complete the tasks that Zapier and webhooks automate for me."

With MOBIT's custom-built forms and Zapier integrated into MOBIT's foundation so thoroughly, webhooks became more of a necessity for the team.

When a customer fills out a contact form or request for a demo, one of Zapier's webhooks catches the response and feeds it into Trello, creating a new card for the client. Once a meeting is booked, another webhook Zap finds and updates that card in Trello with meeting details.

Webhooks help manage their customers, too. When a customer decides on an annual or monthly subscription, MOBIT uses Zapier to alert the entire team on Slack. A webhook sends the new subscriber's contact information into a specific channel in Slack, where the team can celebrate another client with a gif party.

MOBIT uses this simple webhooks-to-Slack Zap for other tasks, too: When a client responds to a text message, or when a potential client reaches out for a pricing quote, or when a new affiliate signs up, those and more are all shared to Slack via webhooks.

"It would be impossible to manually complete the tasks that Zapier and webhooks automate for me," Liam says.

Give MOBIT's workflows a try and then explore and see how else webhooks can help you. With webhooks and Zapier, your custom systems have over 1,000 integrations ready and waiting.

Create a Trello card when a webhook is received

Get Slack notifications for new information from a Webhook

Send Leads and More to a Data Warehouse via Webhooks

Try as we might to partner with every business app on the internet, the truth is there will be some apps Zapier doesn't integrate with (yet). But is anything truly out of reach? As long as those apps have webhooks, not really.

App engagement platform Customer.io helps automate messages to customers for marketing and growth teams. While they use apps like Facebook Lead Ads, FormKeep, and Livestorm, some of the tools they rely on don't have direct integrations with Zapier.

For instance, Customer.io uses Segment for their reporting and analytics. It doesn't yet have a Zapier integration, but it does support webhooks.

"As our data practices grew in sophistication, we started using webhooks to send event data like downloads, newsletter subscriptions, and event attendance to our data warehouse," explains Bill Miksich, Director of Demand Generation at Customer.io.

So when Customer.io receives a new lead from Facebook, Zapier takes the information and sends it to Customer.io's platform and then, with webhooks, on to Segment.

"By using this model, we can almost always use one Zap per channel to handle all the inbound traffic coming from each point solution," Bill says. "Zapier's webhooks save me at least eight to twelve hours every month by automating our top of funnel data collection and routing." 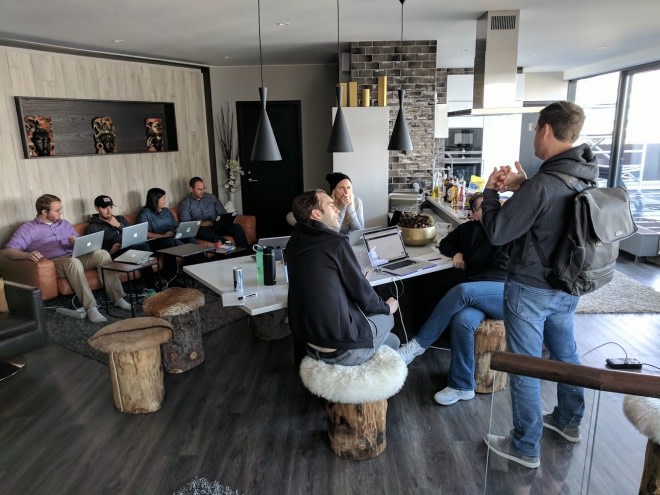 They use the same Zap—but with FormKeep and Livestorm instead of Facebook Lead Ads—whenever a potential customer fills out a form on their website or signs up for a webinar.

"Zapier's webhooks save me at least eight to twelve hours every month by automating our top of funnel data collection and routing."

"The flexibility of the webhook appeals most to me," Bill says. "Being able to send data from point A to point B—whether or not a Zapier integration exists—is magical."

If you're using an application that doesn't yet integrate with Zapier, give any of these Zaps a try or build your own and create your own magic.

Format FormKeep responses and send data through Webhooks by Zapier

Sharing is caring, right? But if you ask any marketing team about their most tedious tasks, sharing new blogs and content to social media will be at the top of that list. You have to find the best time to post, make sure you aren't posting too close to anything else, choose or create images for the social share, and write the copy. Now repeat and repeat and repeat (and repeat).

For Squared Up, an application monitoring solution, the answer is in automation. Squared Up's team uses Zapier and webhooks not just to automate time-consuming tasks (like social media posts), but also to relieve their developers from mundane tasks—and to encourage other teams to build out their own processes without relying on developers.

"As a small team with big ambitions, we’ve relied heavily on automation to help us rapidly grow and expand our business," says Dave Clark, a lead developer at Squared Up. "Automation is always a focal point when we’re discussing new processes."

Some of those processes involve Squared Up's custom content management system (CMS). With a custom CMS, Squared Up can't use a typical Zap linking, say, WordPress to Twitter or Tumblr to Facebook. Instead, they use Zapier's webhooks to connect their content to social media. 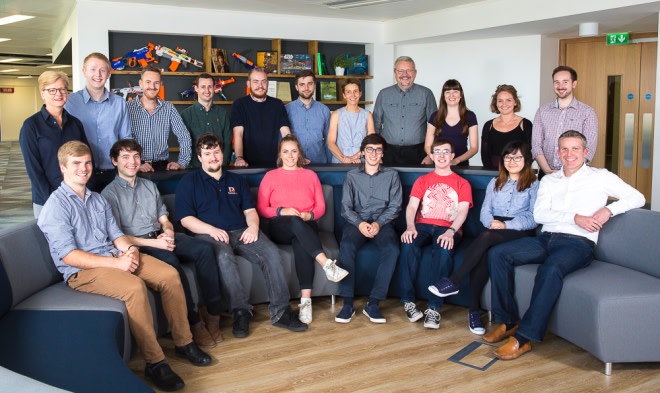 So when Squared Up's marketing team needed a more efficient way to post new blogs and content across social media channels, Dave knew where to start.

"When one of our content editors publishes a blog on our website, a webhook fires which Zapier catches and processes," Dave explains. In short, the blog sends a notification to Zapier with the blog's title and link—and Zapier then posts that to Facebook, Twitter, and LinkedIn. And with Delay by Zapier added to their Zaps, Zapier automatically reposts their content three days later, a week later, a month later, too—all within one Zap.

Webhooks help Squared Up automatically update their internal content library, too. They built a custom app in Podio for all their content. Then, when a new blog is published, it sends a webhook notification to Zapier, and Zapier adds it as a new item in Podio. That way, the marketing team can see what's been published recently and can decide if they need to post anything additional.

"Automating with Zapier and webhooks cuts the time we spend publishing content by 75 percent," says Dave. "Now, we just author in one place and know the same content will be distributed everywhere by Zapier, as if by magic!"

Webhooks may not be actual magic, but with the way Squared Up uses them, they're close enough.

Give their social posting webhooks a try and give yourself back some time:

For some companies, building a custom customer relationship manager (CRM) makes sense early on. It provides more control over your customers' information, your team is in charge of it, and there's no monthly cost.

But as these businesses grow, maintaining their code and API can become an afterthought as developer resources are pulled in other directions. After all, if it works, it works, right? In truth, some of these companies wind up spending more time fixing problems and pulling reports and information that should be a click or two away.

"A lot of these larger companies we're working with built custom software," explains Doug Puccetti, Business Solutions Analyst at obo. Agency. When that software needs a hand, Doug and obo. Agency jump in.

As an account-based marketing firm marketing and sales consulting firm, obo. Agency works with their clients to create connections between custom systems and applications like Salesforce and HubSpot. 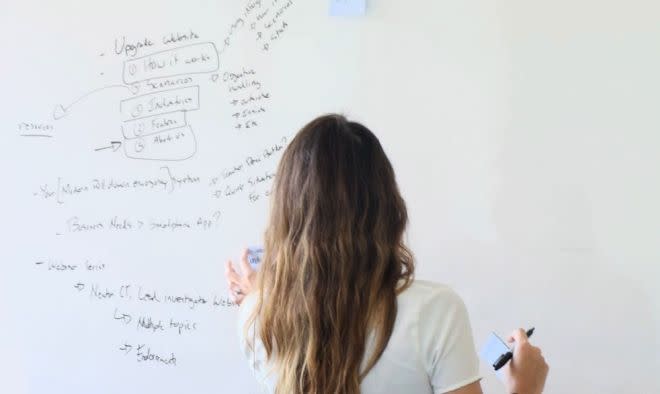 Custom platforms stand on their own: Since they're built internally for that specific company, integrations with tools like Zapier aren't readily available. But that doesn't mean moving data from one system to another is impossible. It just means that Doug and obo have to be creative.

That creativity sometimes means Doug will add webhooks to an API if the API isn't already equipped with them. Once a client's homebrewed API has webhooks, it's ready for a bit of magic.

With webhooks, Zapier intercepts new contacts for obo's clients. When a client generates a new lead, one of Zapier's webhooks catches the new customer and sends it to a Salesforce or HubSpot. Then, Zapier creates a contact, lead, or event in the corresponding app.

Now, thanks to a few handy Zaps, obo's clients have easy access to customer information and data, and can transition to the CRM that meets their needs.

"Zapier makes learning and utilizing webhooks simple and easy," Doug says. "If you're planning on getting into webhooks, definitely start with Zapier."

Want to try sending leads to Salesforce and HubSpot with webhooks? Give these Zaps a try:

There you have it: Webhooks are magic. With them, you can forge connections and build trails where previously, they didn't exist.

Have any apps you’d love to automate—maybe a custom form on your website or an older CRM that doesn’t connect to newer apps? Webhooks might be the answer. Check your app’s settings and documentation, and search for webhooks. If you find an option to enable them, copy the webhooks URL then check out our webhooks page to start using them to automate your most tedious tasks.