Why everyone needs to use Google Calendar's out of office feature

Vacations shouldn't be stressful, but there's nothing relaxing about individually canceling every single appointment you're about to miss. It's also not fun for other people to send you calendar invitations you'll never see while you're offline.

Supercharge your Google Calendar with automation
Learn how

Google Calendar offers an out-of-office feature for exactly this reason. You can indicate when you'll be gone, then any meetings during that time will be automatically declined, all at once. Even better: any other meetings you're added to while you're out will be declined, and whoever invited you will be notified.

Google only added this feature in 2018, and it's slowly showing up in more places. In January 2021, for example, they added an out-of-office indicator to comments on Google Docs. It's not fully rolled out yet, but here's what it'll look like if you have it. 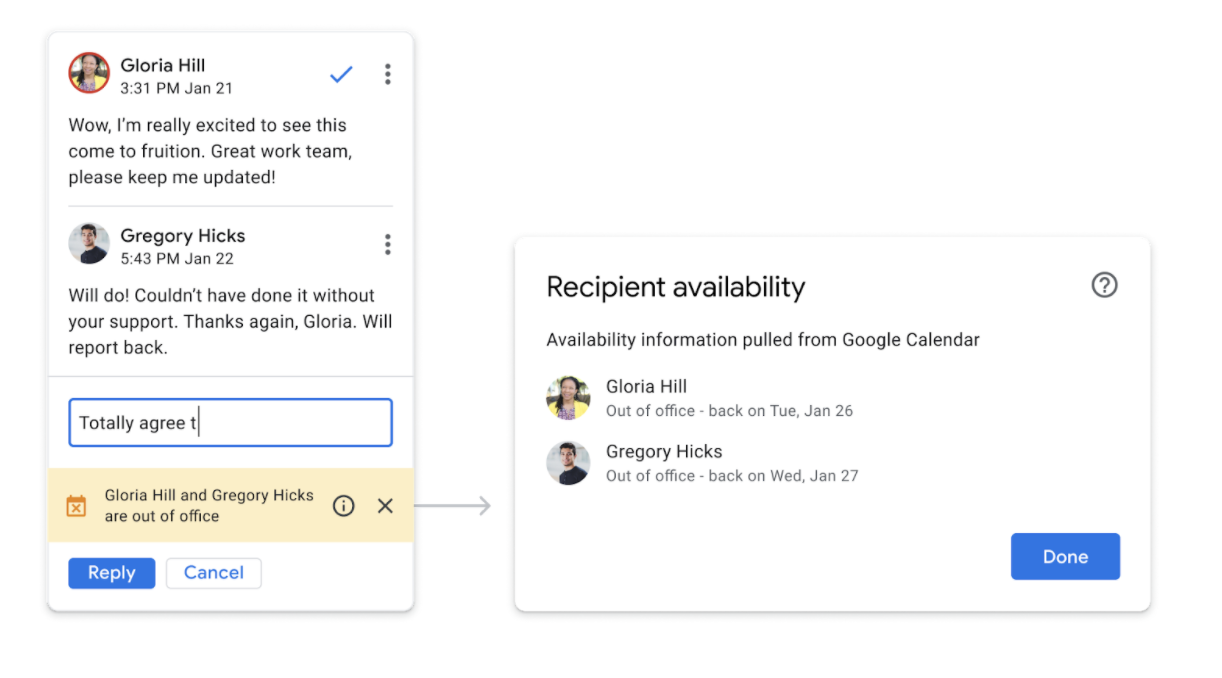 You can also integrate the Google Calendar out-of-office feature with other apps (think: changing your Slack status when you're OOO). We'll talk about that, but first, let's go over the basics.

How to set out-of-office time in Google Calendar

Setting up out-of-office time in Google Calendar starts like adding any other appointment: select the time in your calendar, as usual, to see a pop-up. Name your event, then click the Out of office option. 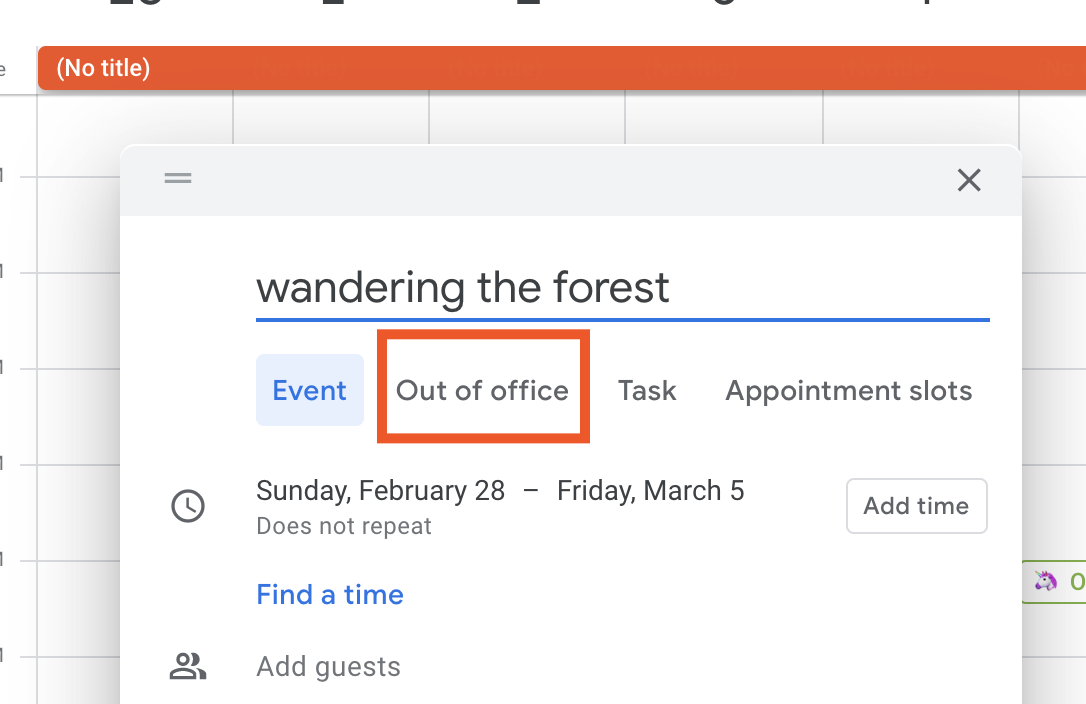 The pop-up window will change, showing you the out-of-office options. 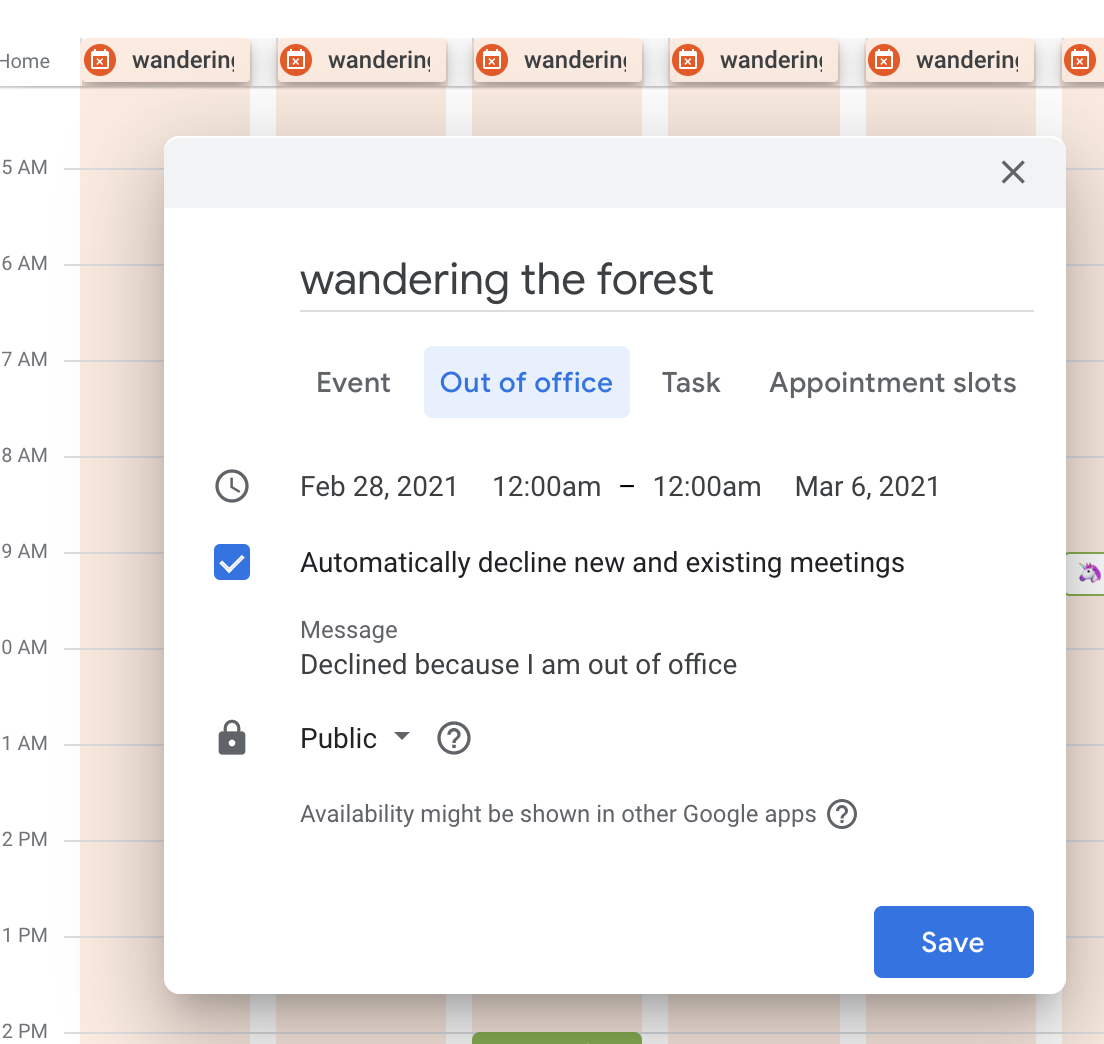 By default, all meetings set during your out-of-office time will be declined—this applies both to meetings you've already accepted and any new meetings someone might invite you to. You can also leave a custom message, explaining where you'll be and (potentially) how people can reach you. Going forward, anyone who tries to schedule an appointment with you during your out-of-office time will also be declined.

Everyone will automatically get an email explaining that you're out of office, which means you don't have to keep reminding everyone not to set appointments with you. 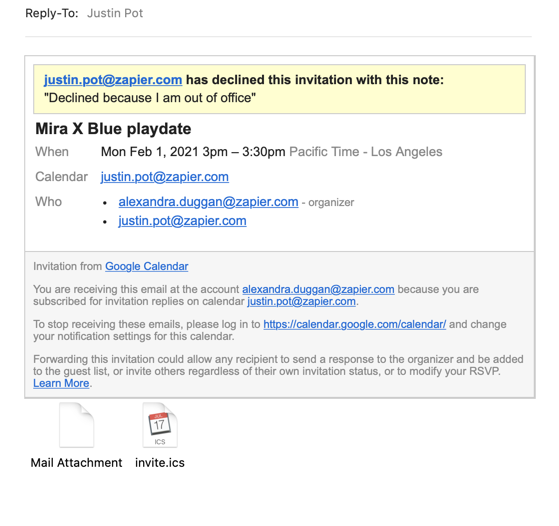 If you're using Google Workspace, this status shows up in other places too, for anyone in your organization. For example, in Gmail, if someone's drafting a message to you. 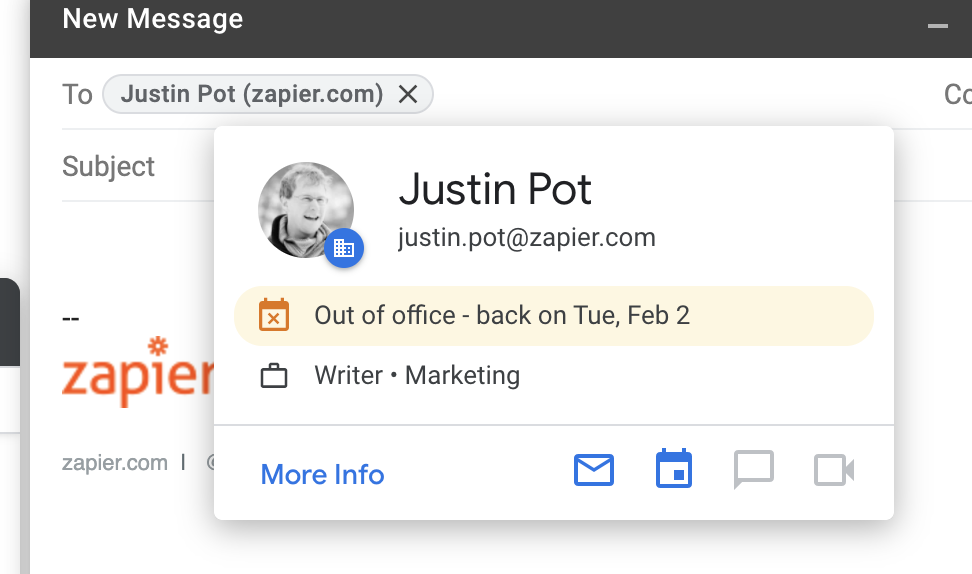 Or in Google Chat, if your team uses Google's messaging tool.

Google seems to be expanding this feature to more places, so you can probably expect it to become even more visible over time.

Automate other apps when you're out of office in Google Calendar

Zapier can connect Google Calendar to thousands of apps. This means you can use it to integrate Google Calendar's out-of-office feature to non-Google apps too.

For example: I want my team on Slack to know when I'm not working. Zapier lets me create a workflow that changes my Slack status automatically when my Google Calendar is set to out of office.

By default, these automations trigger for every Google Calendar event, but you can make them specific to out-of-office events in just a few steps. Start by clicking the Advanced Mode option. 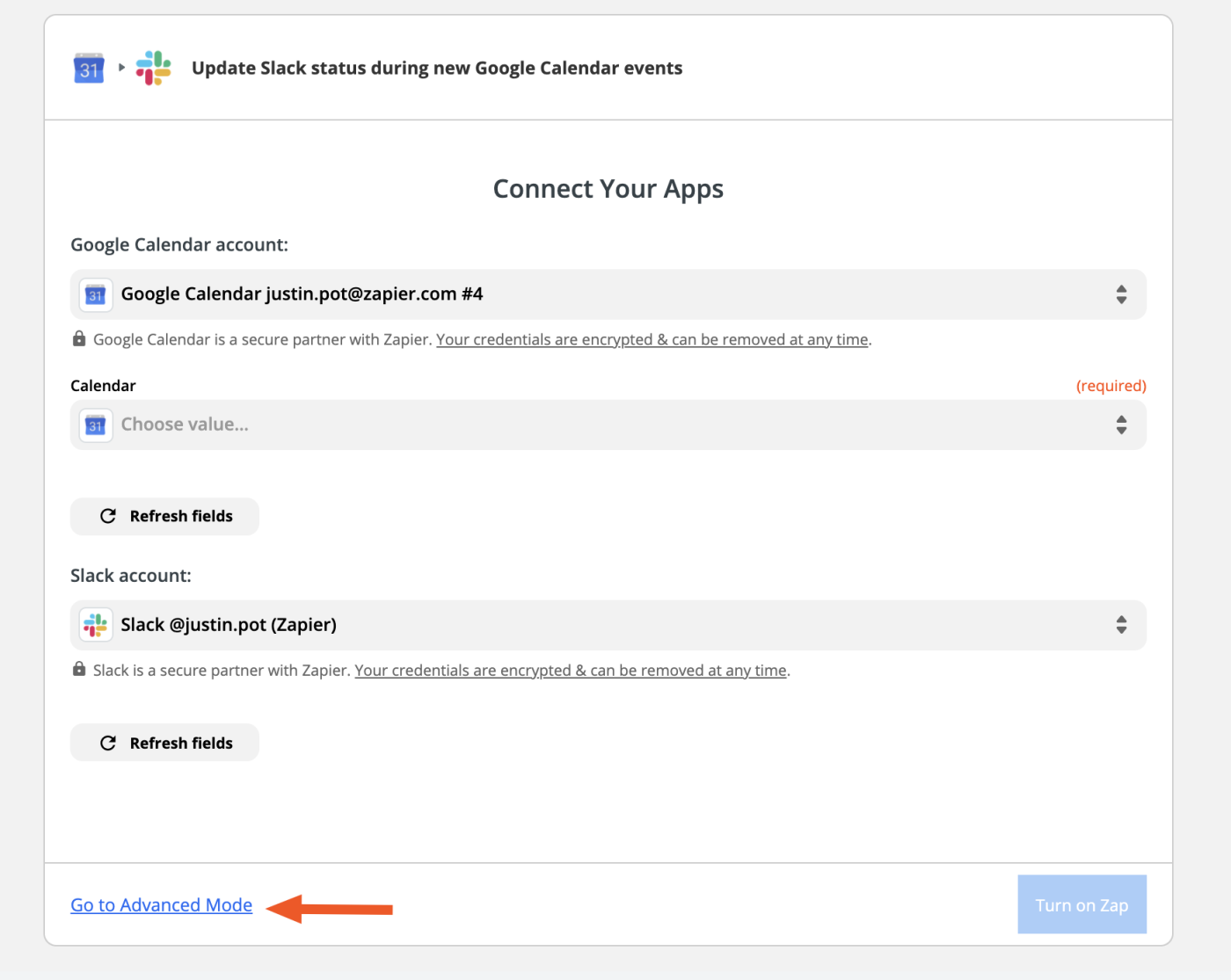 In the Google Calendar trigger step, set a Search Term. 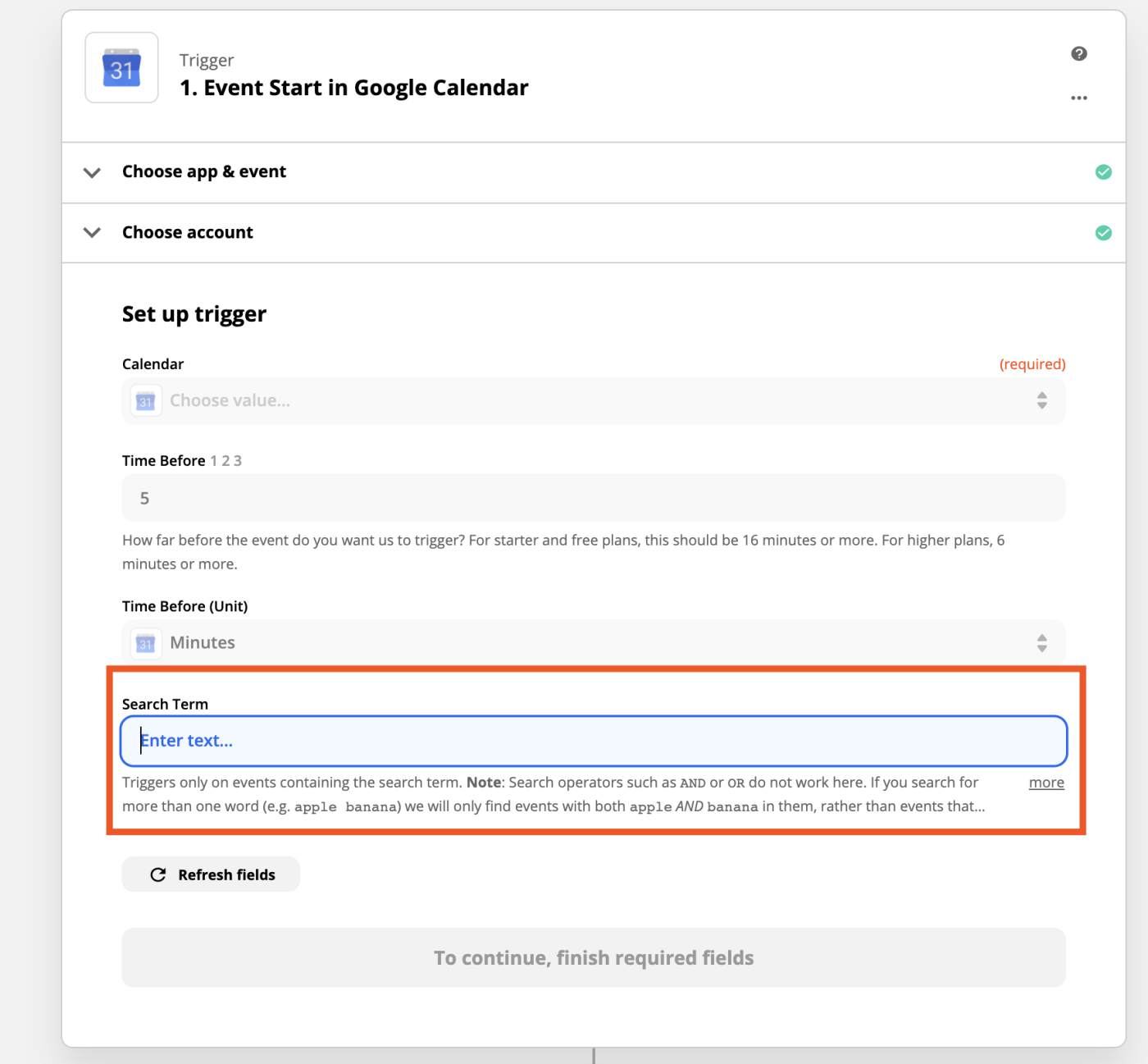 Use the search term Out of office to only trigger for out of office events (you'll need to be sure all your OOO events are called that).

This works for any Zap (our term for an automated workflow) that uses Google Calendar as the trigger. I could, for example, send out an email or text message when I'm about to be out of office.

And these are only a few examples. Check out Zapier's Google Calendar integrations to learn more.