Because Zapier is a completely remote team, our semi-annual retreats are a pretty big deal for us. 351 days of the year, most of us on the 50+ person team never interacts with another teammate in person. Which is great, because it gives us flexibility to work in our optimal environments.

But some things are best done in person, like team bonding, and that's where retreats come in handy. When we get together at one location for a week twice a year, we share meals together, have off-the-cuff conversations, work on projects side-by-side, and--probably our favorite activities--try to defeat each other in board and card games.

Without further ado, here are our favorite games we play on retreats. Despite most of them being strategic, take-everyone-else-out games, they're a ton of fun. Zapier Support Training Lead Thomas Hils quips, "Nothing builds cohesion like games of division." 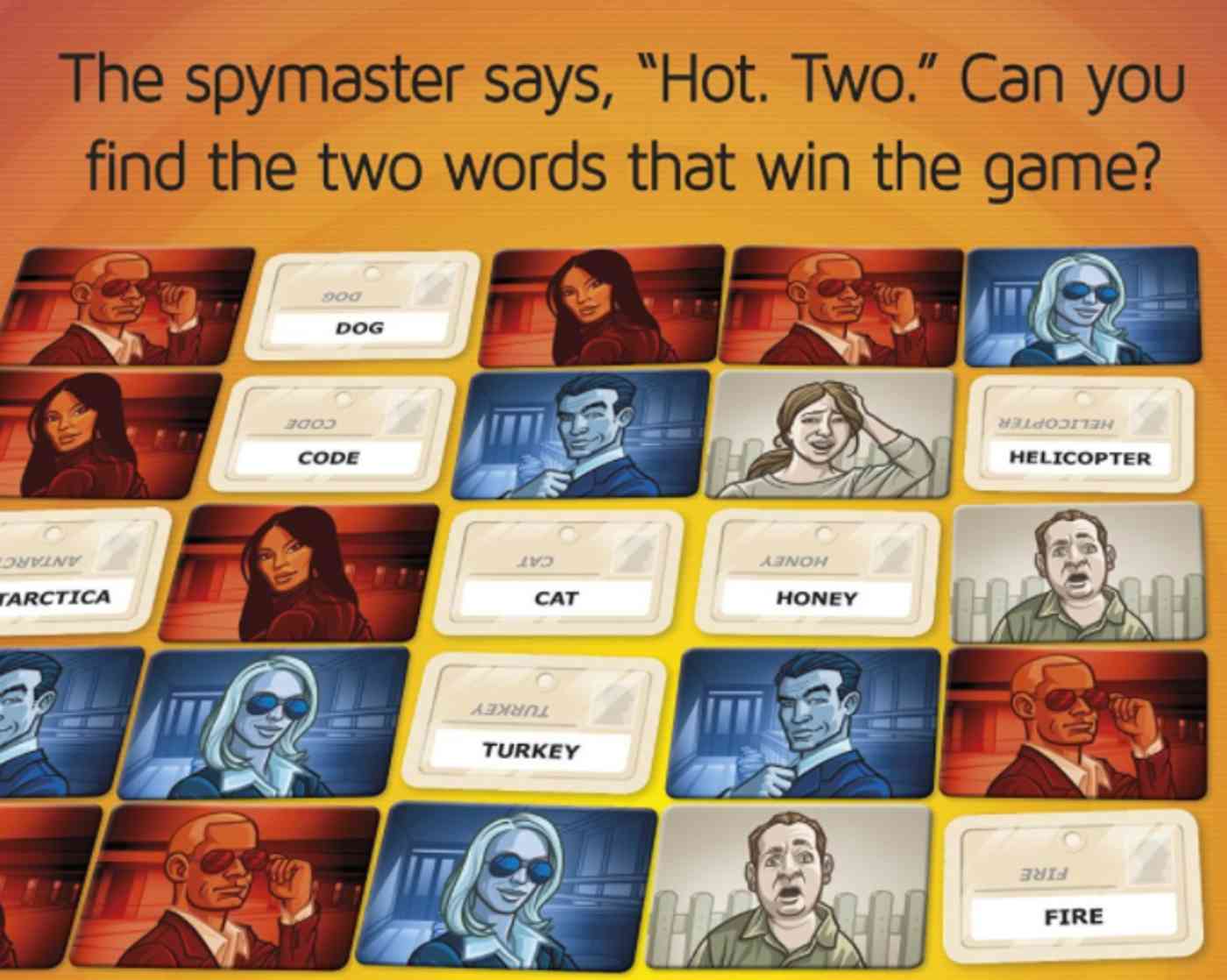 In this word game created by Vlaada Chvatil, two spymasters lead their teams with one-word clues that can point to multiple words on the board. Their teammates have to guess the correct words for their team while avoiding words that are assigned to the other team or that belongs to the "assassin."

Guessing word clues sounds a lot easier than it is. As the spymaster, you have to give a clue specific enough to match up with as many words on the board as possible for your team that also wouldn't overlap with words belonging to the other team. As a team member, you have to guess what your spymaster is thinking. So, for example, if cards on the board include "dog," "cat," and "turkey," you might use "animal" as the clue. However, if "turkey" belongs to the other team, you couldn't use "animal," but might try "pet"--a risk if some people on your team think turkeys make good pets.

Although two people can play, the game is more fun and competitive with four or more players. As a word association game, it's often enlightening and funny to see how others make connections and associations.

Fun fact: At one of our retreats, the hotel kicked us out of our conference room after 11pm, so we weren't able to continue playing the game. So one of our product engineers whipped up a Slack version: 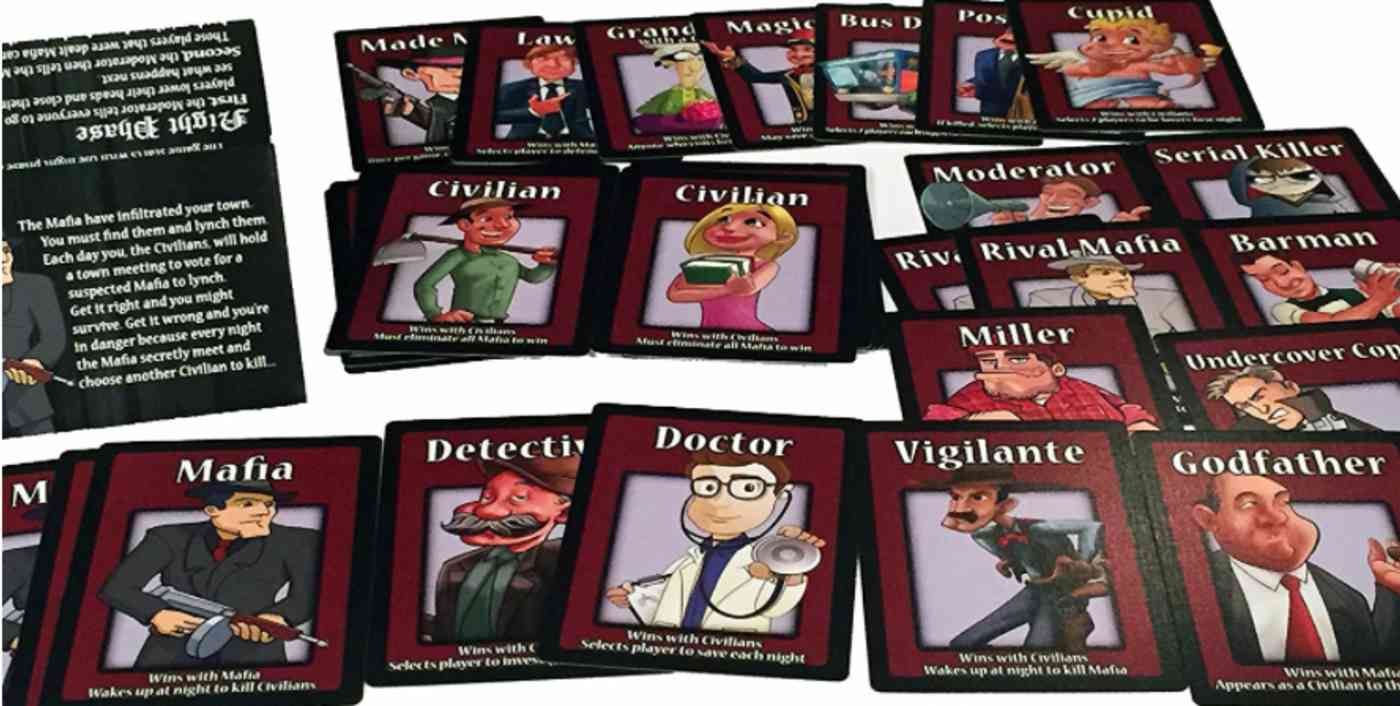 Mafia has several variations, including Werewolf and Assassin. It's a group role-playing game in which you try to detect who is lying and also try to survive, perhaps by bluffing.

There are other player roles that can be included, such as the Detective, a townsperson who can learn every night what team one other person is on.

The game is fun because of the discussions and players trying to convince the others they have a certain role. Everyone is suspicious, and you get to find out how well your teammates bluff. Accusations are serious, too. You don't want to hang the wrong person! 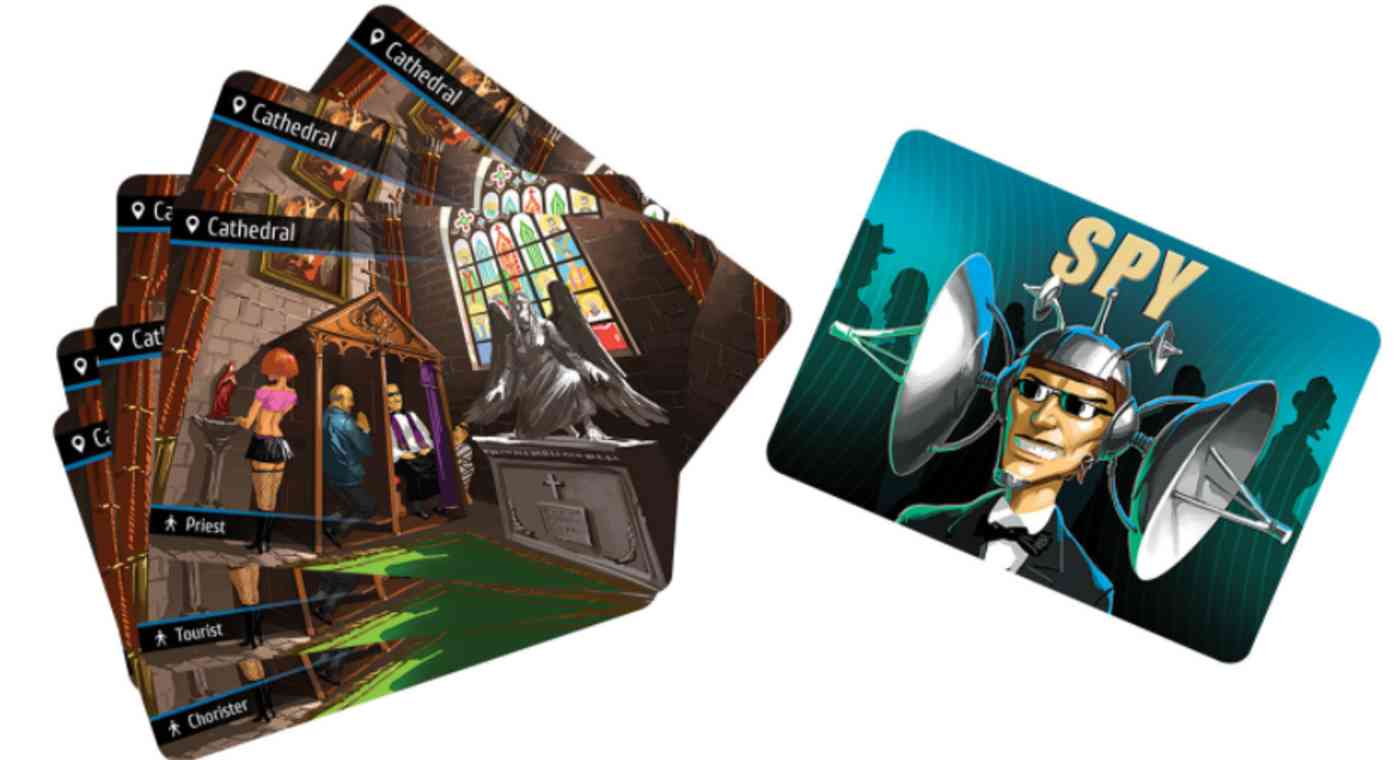 Yes, another spy-based game. In Spyfall, players are secretly assigned a location--a restaurant, prison, pirate ship, swimming pool, etc. One person, however, is not assigned a location but is the spy. The other players try figure out which person is the spy through probing questions, such as "what kind of clothing do most people wear at your location?" and "what's the typical dinner at your place?"

The spy tries to bluff so as to appear to be in the same location as everyone else and also asks questions to figure out everyone else's location. The spy wins if he or she guesses the location correctly or if the other players all uncover the spy.

Warning: This is not a comfortable game for those who don't like bluffing and coming up with impromptu stories. But it is a good game if you're good at persuading and misdirecting others. 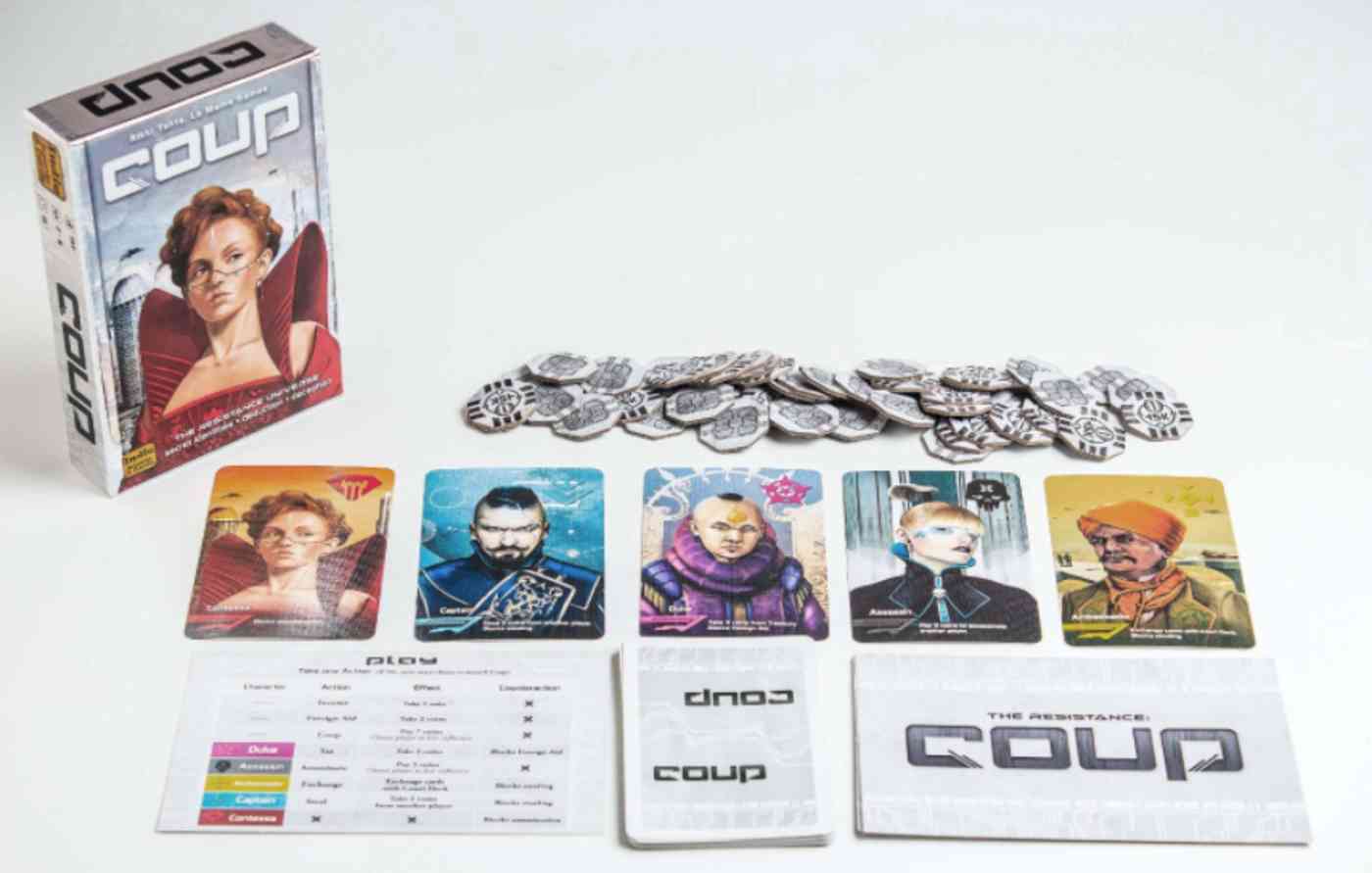 Coup takes a bit more time to get used to and learn the rules, but it follows the major themes of the other games on this list: strategic deception, risk-taking, and deduction. Your goal of the game is to eliminate everyone else by forcing them to discard their cards.

Each player gets two cards with a character on it. There are five types of characters, three cards of each in the deck of 15 cards. Each character has a special action they can take. On your turn, you can take any action available to your characters, such as taking coins from the bank, stealing coins from another player (if you're the Captain), changing cards from the pile (if you're the Ambassador), and so on.

Unlike other games, however, you don't have to bluff. You can simply play along as your cards allow. The most successful players, however, will probably use duplicity to their advantage. This is an intense game, and fun to sit out and watch the players question each other's actions.

Two Rooms and a Boom

Two Rooms and a Boom started out as a Kickstarter campaign by Alan Gerding and is now one of the highest-rated party games on Amazon.

Players are divided into two groups: the red team, which has a Bomber, and the blue team, which has a President. The teams are physically separated into two rooms or playing areas, and each team has a leader. Over 3 timed rounds, the leader chooses "hostages," players who will be sent to the other room at the end of the round. When you're sent to another room, that team can ask you questions to try to deduce if you're the bomber or the president.

Players can choose to show their character cards (or not) to other team members, which ends up being a funny dance of "I'll show you mine if you show me yours." Lots of social deduction, backstabbing, and intrigue with this one!

Fun fact: During one of the rounds of this game at our last retreat, I was taken hostage almost immediately by the red team and basically sat on the couch the entire time watching them conspire against the other team. You can really feel like a hostage in this role play. 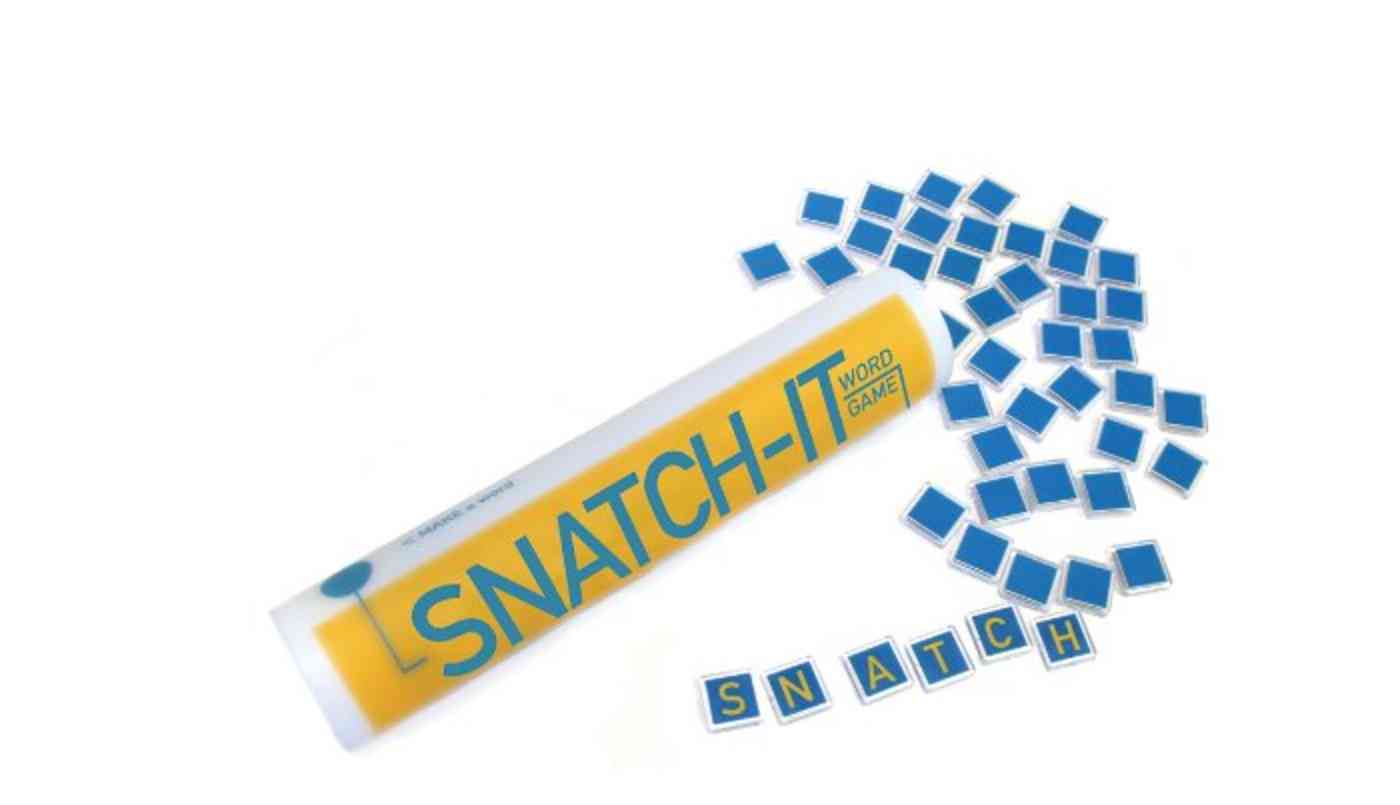 If you thought choosing townsfolk to pretend murder was mean, wait `til you try Snatch-It. In this evil/awesome game, players turn over word tiles to try to create words out of, sort of like Scrabble. When all the tiles are used or turned over, points are tallied for each person's words, with longer words getting more points.

The evil is built into the game: Players are free to steal tiles from each other to build new words. Depending on the players, this can end up becoming a letter-snatching frenzy, as everyone seizes every opportunity available and watches the tiles like a hawk.

If your team or family loves words, as we do at Zapier, and has a competitive spirit, you'll probably love this game (as heartbreaking as it is to have "your" tiles stolen and words dismantled). Bonus: You might learn new words or the correct spelling of them from the game. 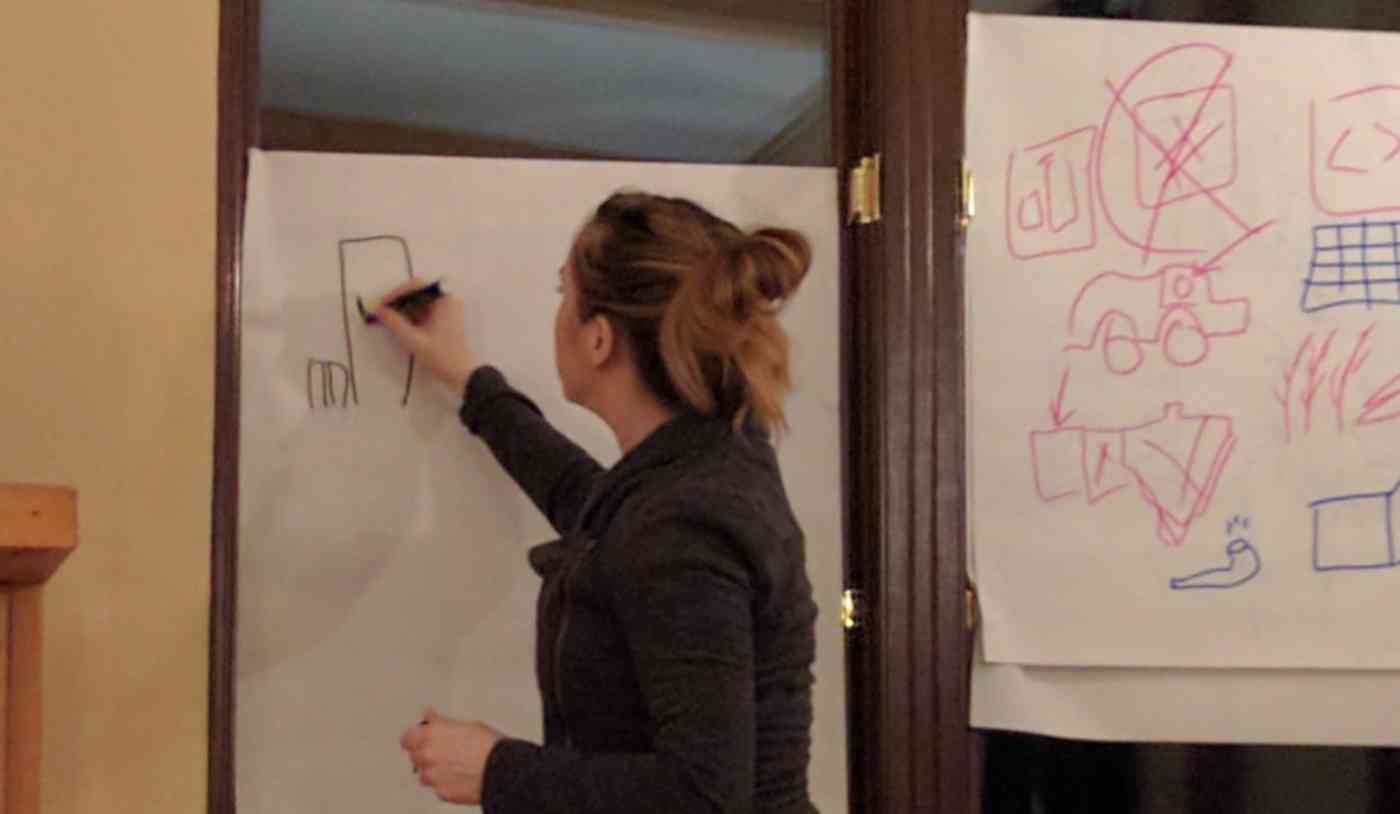 We're not all about defeating each other in strategy games. Sometimes we just get really geeky and play a version of Pictionary in which we try to guess apps based on their logos or other visual clues. APPictionary, anyone?

Melanie Pinola is a NY-based writer. Besides trying out new productivity systems, she enjoys cooking, playing video games with her family, and traveling. Follow her at @melaniepinola.