How to win at Zoom backgrounds, from a first-place winner

Recently, video conferencing tool Zoom started a monthly virtual background contest. Remote workers from around the world vie for the prestigious title. In March 2020, Zapier's own Ben Peter won the contest. This is his story.

The Zapier senior engineer recalls when he first discovered Zoom's virtual background feature in October 2018. "[A]wwwwyiiiiis," Ben remarked to his coworkers on Slack.

Back in its early days, the feature required a green screen—or some type of solid-colored background—allowing access only to those in Hollywood or towns with fabric stores. Ben remembers:

I went out to the fabric store and bought a whole bunch of green fabric. The person at the checkout was like, "What are you gonna do with that worst shade of green possible?"

Little did they know that shade of green would make Ben Peter a household name.

Ben went home and began setting up. With nothing but a stapler and a dream, he hung his green screen in the unfinished basement of his house, just behind the music stand he used as a desk. 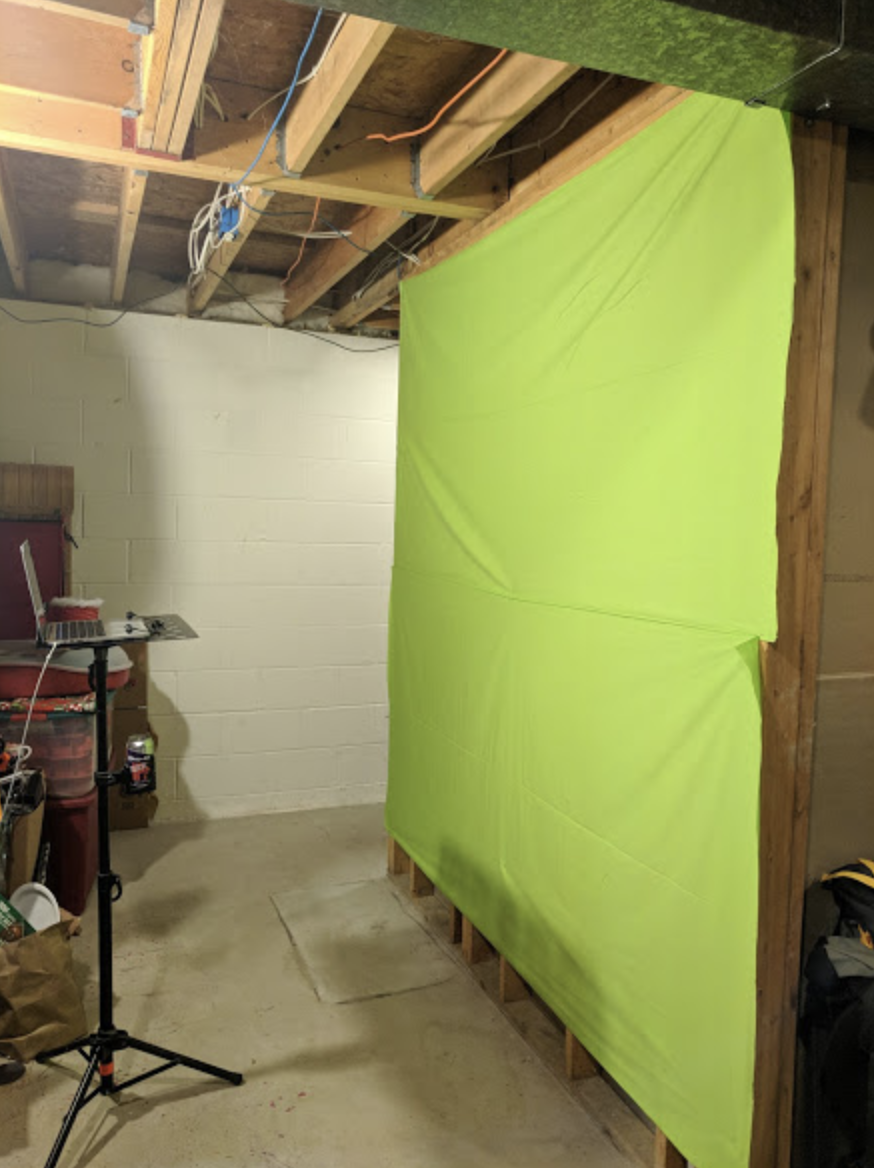 The worst shade of green possible, according to a JOANN Fabric employee in Minnesota

With the background artfully stapled into the studs, he got to work.

Over time, Ben honed his craft. He pulled the staples out and relocated, calculated the best angles for lighting, and scoured the internet for appropriate images. Along the way, he realized that his Zoom backgrounds had become self-expressive.

"What kinds of backgrounds do you gravitate towards?" he asked rhetorically. "The images you choose are a way to subtly express yourself in the background of a call." His favorites, at press time, were something resembling The Matrix and a blue circuit board.

"I love the color blue," he noted. 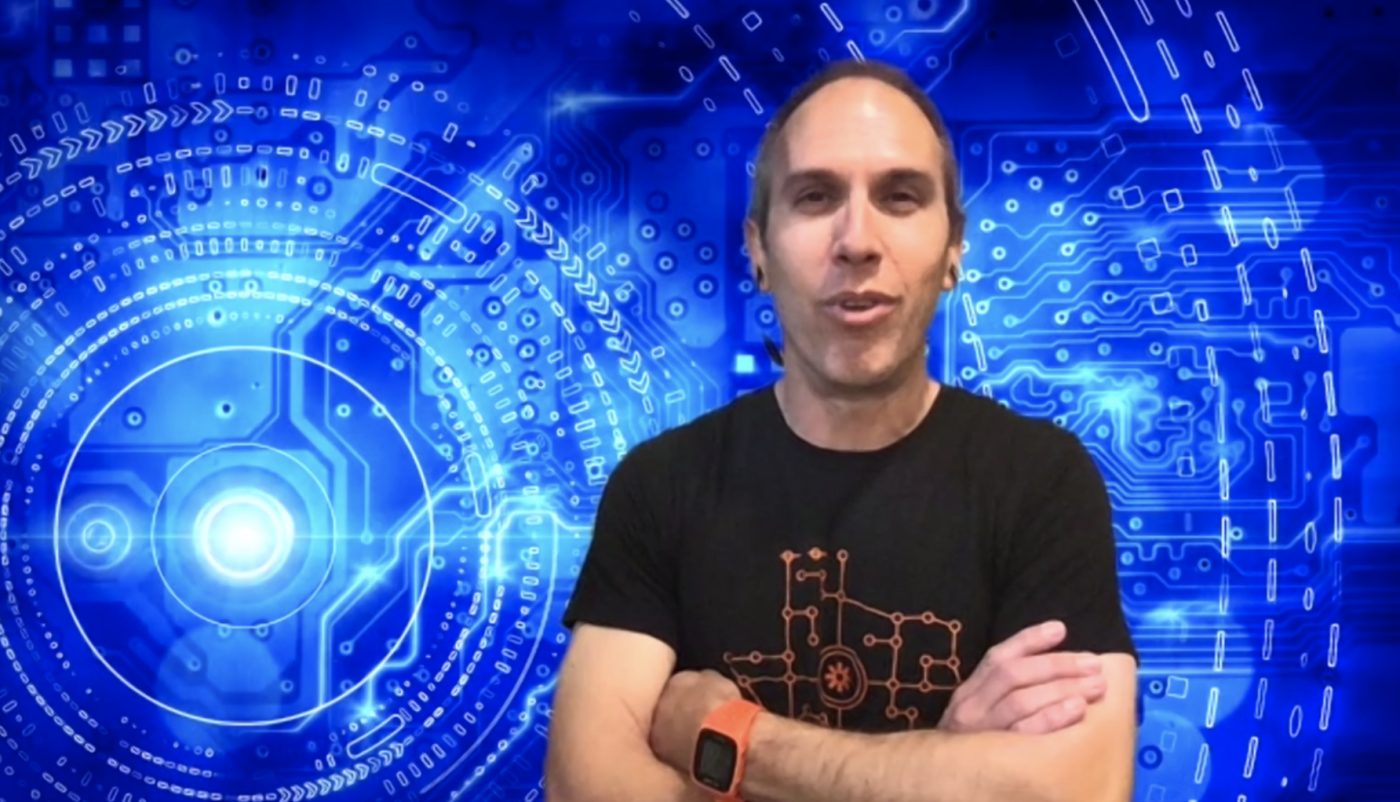 Ben even began selecting backgrounds to match his wardrobe. 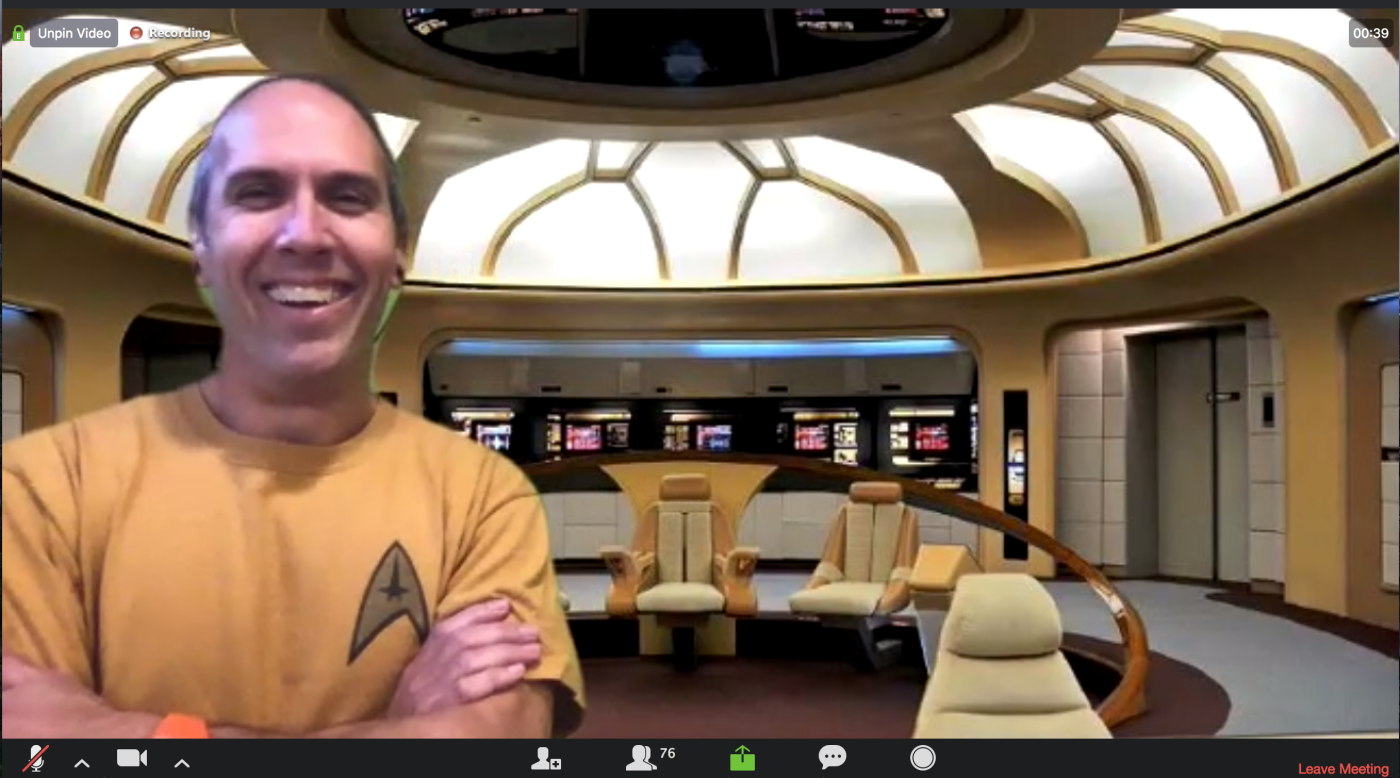 Ben has even customized his backgrounds to engage his specific audience. When he's talking with Zapier partners, for example, he says he'll create a background with their company's logo.

When asked if his backgrounds have ever inspired any emotional reactions, Ben pauses. "No," he answers. While he always offers to turn the background off if it's too distracting, no one has ever taken him up on it.

When Ben learned of Zoom's contest, he knew he had to enter. And with more and more people working remotely, he had to act quick.

His family's spring break trip had been canceled, so his son, a local fifth-grader, stepped up to help. Together, they set up a harness and tweaked camera angles. It took hours to align it in such a way as to hide the rope that would be supporting him. They had their eureka moment when Ben's son gasped and exclaimed, "Sideways. We hang you sideways, Dad."

After half a day's work, they finally had it. 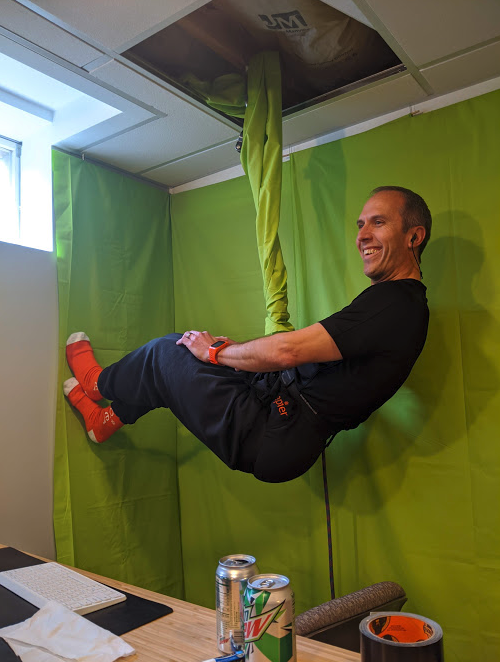 Ben, in Zapier socks and sweatpants, in front of his green screen. 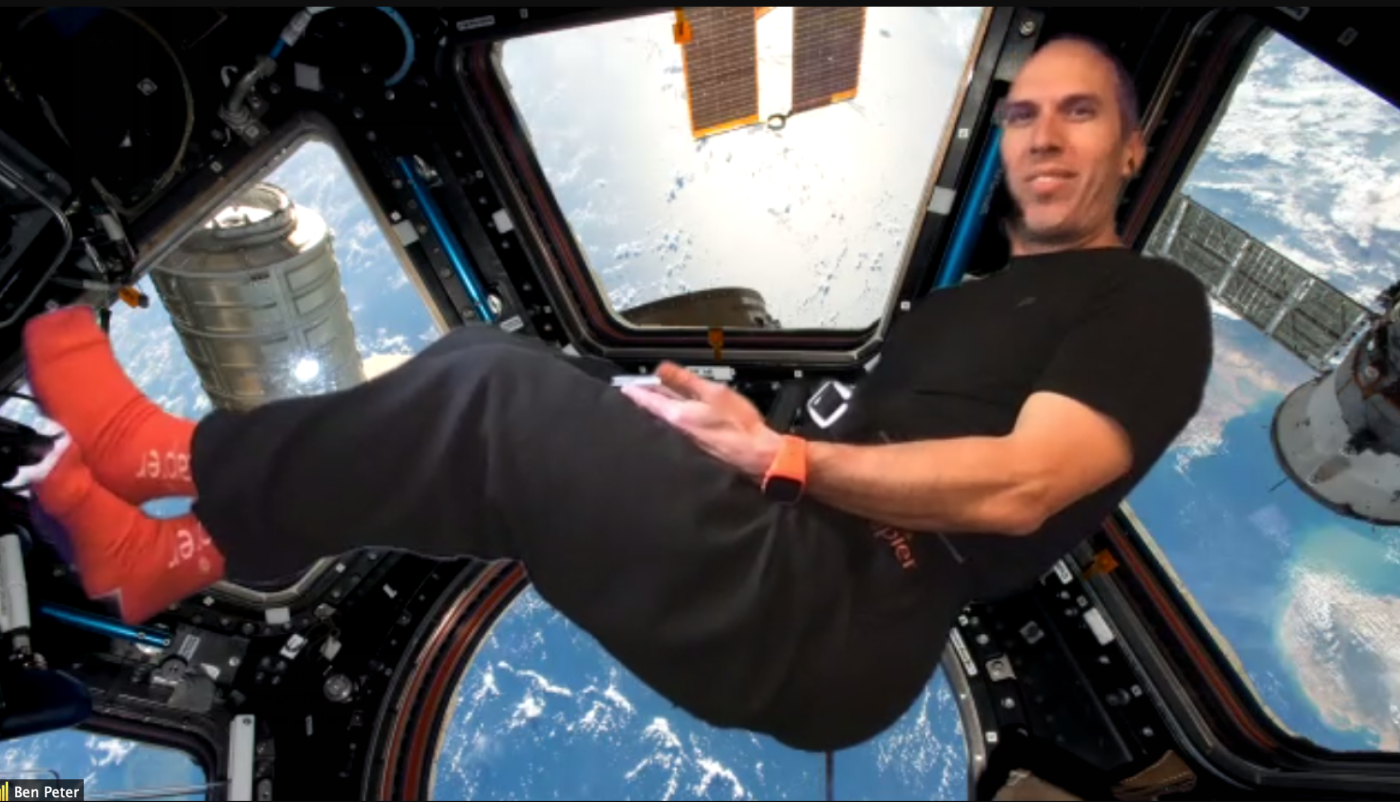 Ben, in Zapier socks and sweatpants, at the International Space Station.

According to a source close to Zoom's Twitter account, he's the only person who suspended themselves from a ceiling for the contest.

That's how Ben won the title of "1 of 3 Winners Per Month," along with two pieces of Zoom swag. Now he hopes to pay it forward by sharing his knowledge with the world. Here are his tips for how to make a Zoom virtual background.

Since Ben first discovered the feature in 2018, Zoom has upgraded its options so that you don't need to use a physical green screen. Instead, you can upload any image and use it as your background. Ben's understanding is that Zoom uses some sort of facial recognition software, detects what's attached to the face, and removes everything else. It's a simpler set-up, but you risk having your disembodied face float pixelated across the screen in the middle of a professional call. Ben is no amateur, so all of his tips relate to the green screen feature.

It's really that simple. Ben opens a Google Slides presentation and starts with a blank, white slide. He then picks some images from the internet, takes a screenshot, and voilà. "Don't overthink it," he says, suspended three feet in the air in front of his homemade green screen.

Don't use a vertical image, advises Ben. You need a widescreen view so the image doesn't distort.

3. Don't center the important part of the image

"Don't use an image where the important part is in the center of view," says Ben. "Otherwise the person obstructs it." Instead, he suggests putting the eye-catching part of the image to one side and then positioning yourself on the other side. 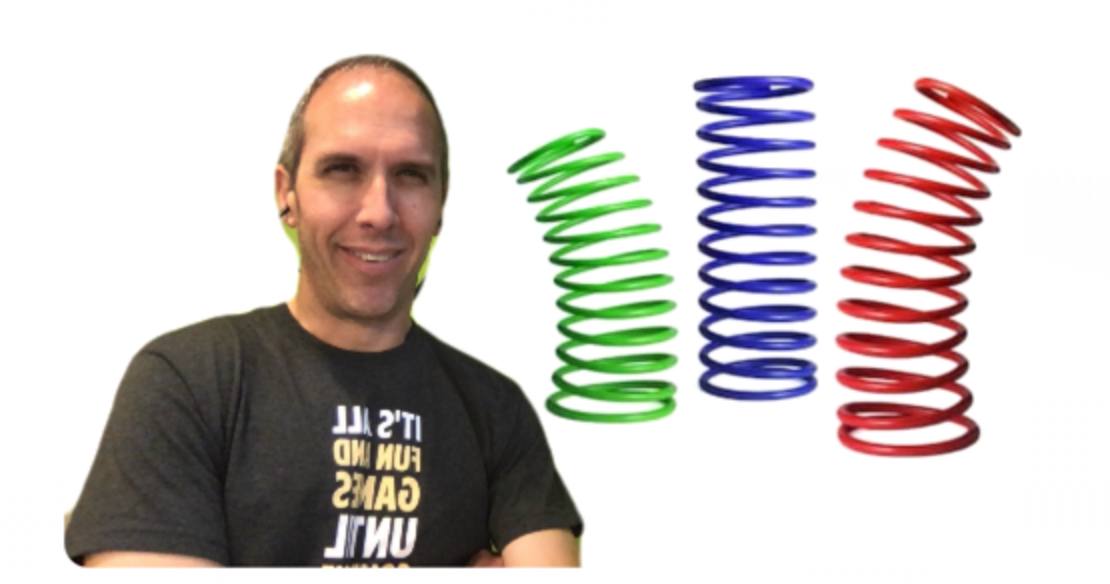 From left to right: Ben, springs.

4. Get the lighting right

Ben notes that it works best when you have multiple light sources in front of you. Otherwise, he says, if you're in green screen mode, you might get a shadow behind yourself—and the algorithm doesn't recognize that shadowy green. Ideally, having lamps or natural light on your left and right—and overhead, if possible—helps balance out the lighting.

Ben used a green can of Diet Mountain Dew to demonstrate how the green screen would change all green colors to match the background because apparently that's how green screens work. But I got distracted by the image and stopped listening, so consider this free product placement.

Fun fact: "Most people don't know this," says Ben, "but green screens aren't only for creating perfectly executed Zoom backgrounds. Meteorologists have been using them for years."

Recently, Zoom added the ability to use a video background. Ben has been dreaming of that feature since he visited that fabric store, and that, he says, is how he'll up his game.