Wunderlist is shutting down May 6, here's what you need to know

How to migrate your tasks to another app

Microsoft bought Wunderlist in 2015. They would very much like you to migrate your tasks to Microsoft To Do, a spiritual successor to Wunderlist that integrates with Outlook and other Microsoft tools. That's not your only option, however: most of the best to do list apps offer some kind of option for migrating Wunderlist tasks, and there are ways to migrate to other apps.

Feeling confused? Let's go over what, exactly, is happening, and explore all of your options.

In the short term, nothing changes: Wunderlist will continue to work. New users can't sign up for the service, but existing users can still sign in to the web, desktop, and mobile versions.

What happens when users try to use Wunderlist after May 6, 2020? Here's the official info, from the Wunderlist blog post announcing the shutdown:

You can keep using Wunderlist while we keep supporting it. You’ll still be able to access your data—you can choose to export it, or import it into To Do. Of course, we’d love for you to continue your journey with Microsoft To Do. After May 6th, your to-dos will no longer sync. For a period of time, you’ll still be able to import your lists into To Do.

This implies that users will still be able to log in and see their tasks after May 6. Users who intend to migrate to Microsoft To Do can wait until the shut down happens and migrate their tasks then. If that's you, great! Feel free to keep using Wunderlist.

Users who want to migrate to another service, however, should probably act before May 6. Wunderlist's post doesn't outright say that users won't be able to export data after the shutdown, but read between the lines and it's implied: the post mentions users can export data before the shutdown, but only mentions migrating to Microsoft To Do after.

Give Microsoft To Do a shot 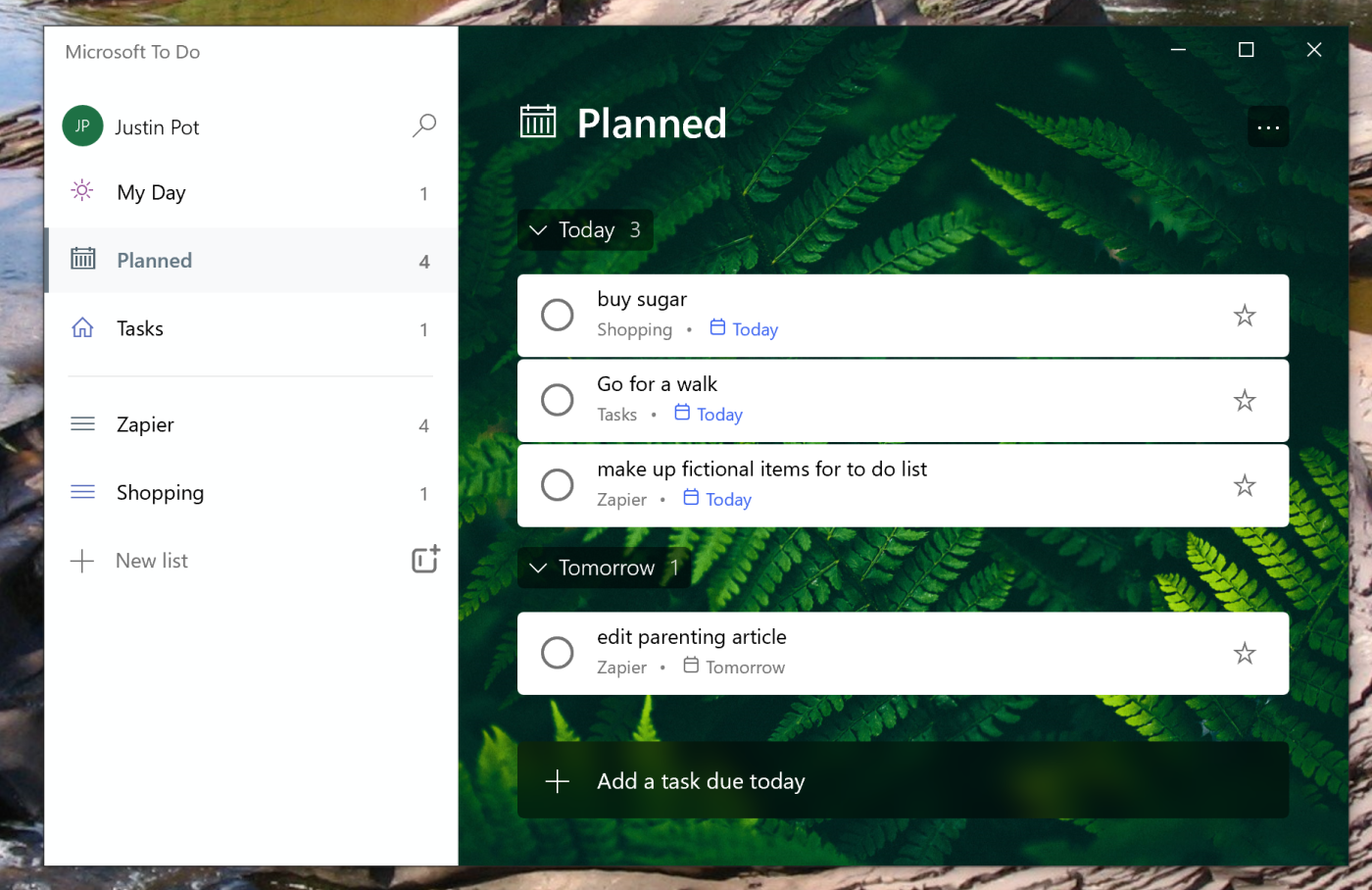 As we said: Microsoft would very, very much like it if you switched from Wunderlist to Microsoft To Do. This is a solid option: Microsoft To Do is one of the best to do list apps out there. Wunderlist users will notice it's familiar, which makes sense considering it was built by the Wunderlist team after Microsoft acquired the company. There are custom backgrounds to choose from, and you can even set a different background for every list. Like Wunderlist, To Do is cross-platform: there are desktop apps for Windows, macOS, Android, and iPhone/iPad.

To Do also integrates nicely with Microsoft's ecosystem. Tasks sync with Outlook, for example. Windows users can add tasks using Cortana, or by typing in the Start Menu. For example, you can type "add rice to my shopping list" and rice will be added to a list called "shopping".

Migrating Wunderlist tasks to Microsoft To Do is simple. Head to to-do.microsoft.com and sign in using your Microsoft account. Open the settings and you'll find the migration tool. 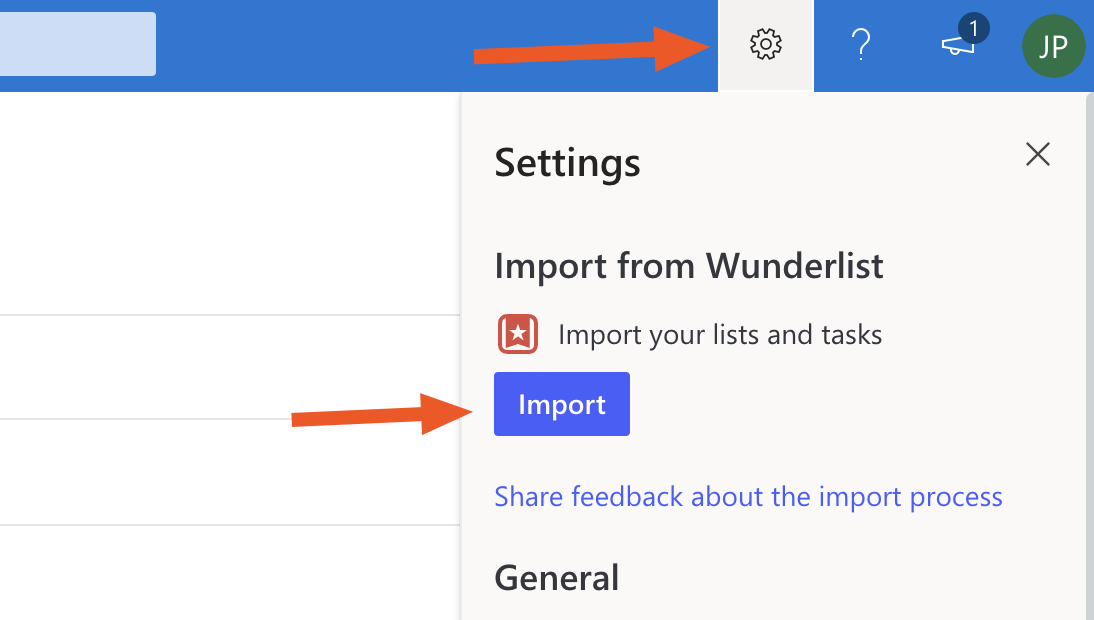 Follow the steps to pull your lists and tasks over to Microsoft To Do.

Send Wunderlist data to other apps

Not sure if Microsoft To Do is right for you? You're not alone, and happily you've got options. Several of the best to do list apps offer official migration tools that can grab your Wunderlist tasks for you. Here are links to a couple:

You can also export your Wunderlist tasks at export.wunderlist.com. 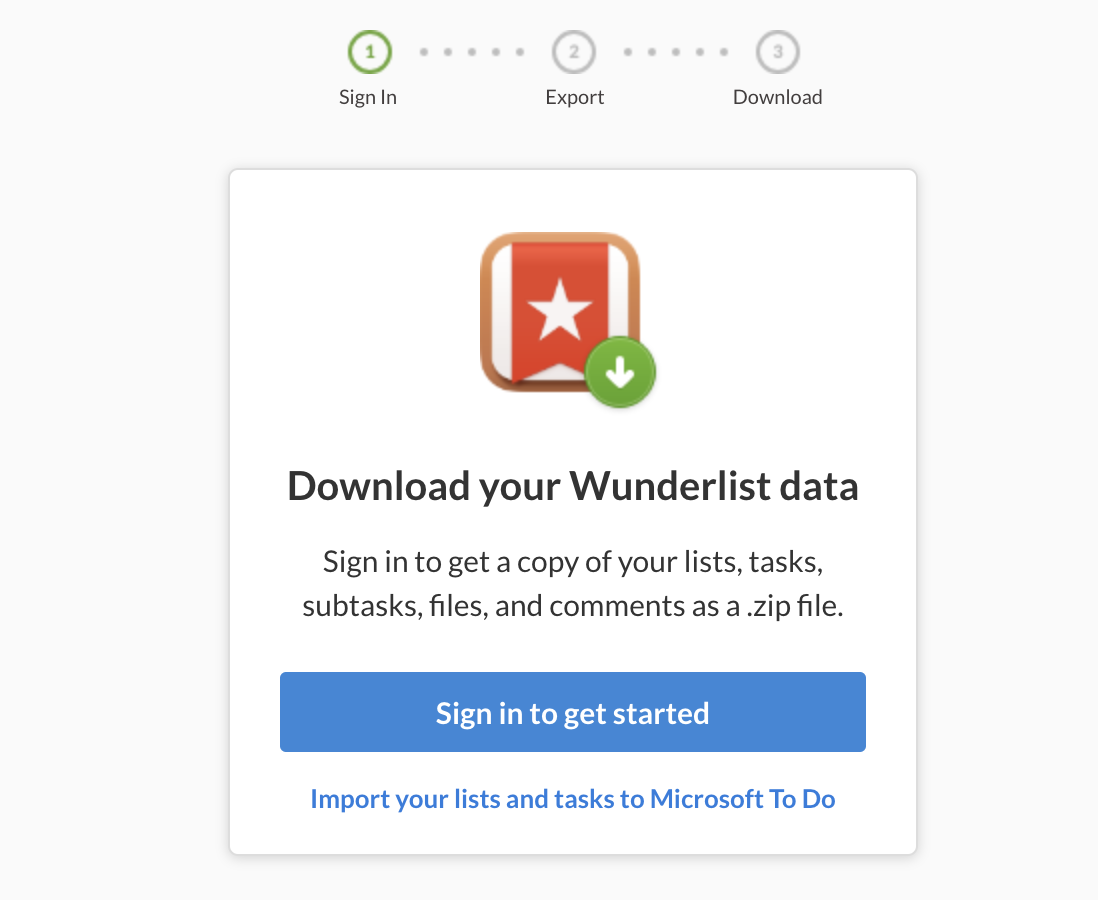 You will be asked for your email address and sent a message when the data is ready. You'll get a ZIP file with all of your tasks in various formats. You can use this as an archive, if you like, but you can also import your tasks to apps like Things and Remember The Milk, among others.

If your preferred Wunderlist alternative doesn't support migrating tasks, don't worry: We've got a workaround for you.

Zapier has a Wunderlist integration, and it's actually one of the most popular ones we offer. This gives you a way to export information from Wunderlist to thousands of apps, including Trello, Omnifocus, Google Tasks, and Nozbe.

To get started sign up for Zapier, if you haven't already. We're going to make a new Zap, using Wunderlist as the first step. Use Task Completed as the trigger step. 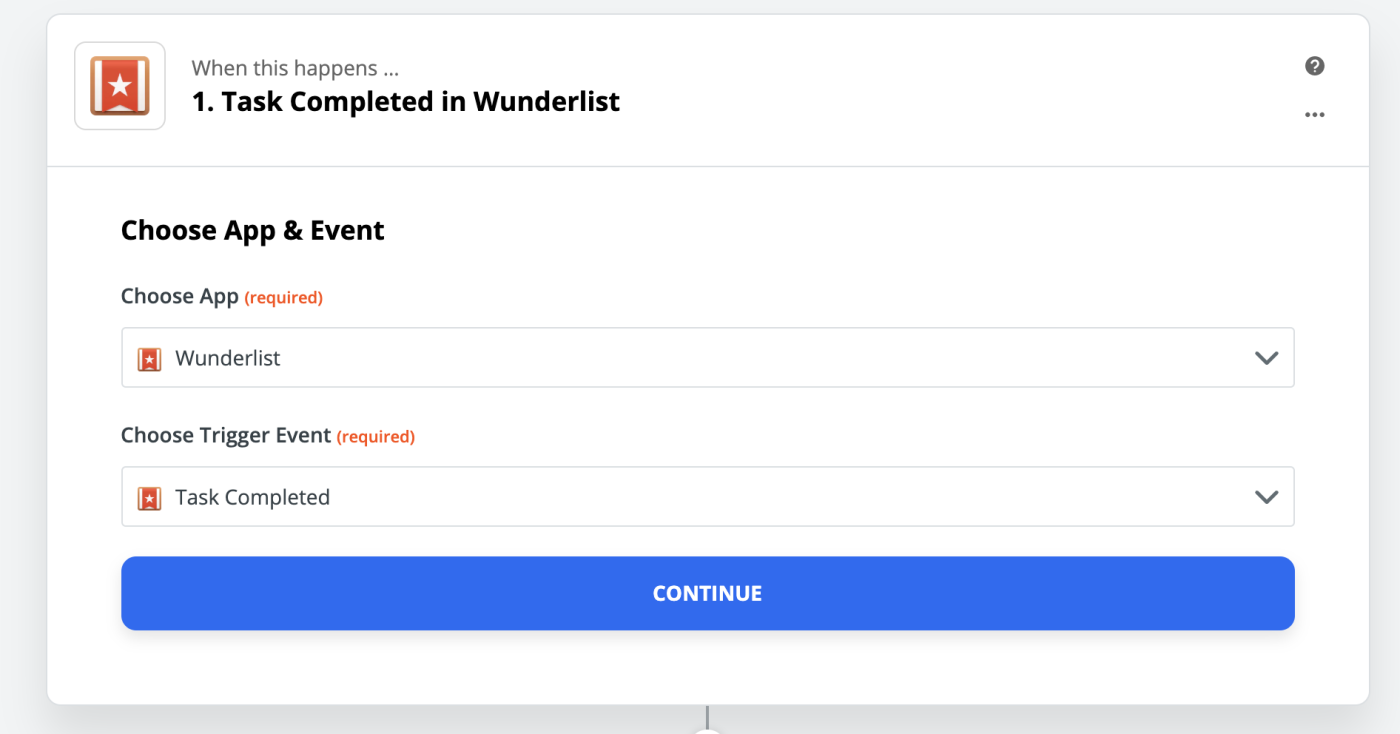 Choose which list you'd like to import tasks from, then choose which app you'd like to migrate your tasks to. I'm going to use Google Tasks, which doesn't offer a Wunderlist migration tool. 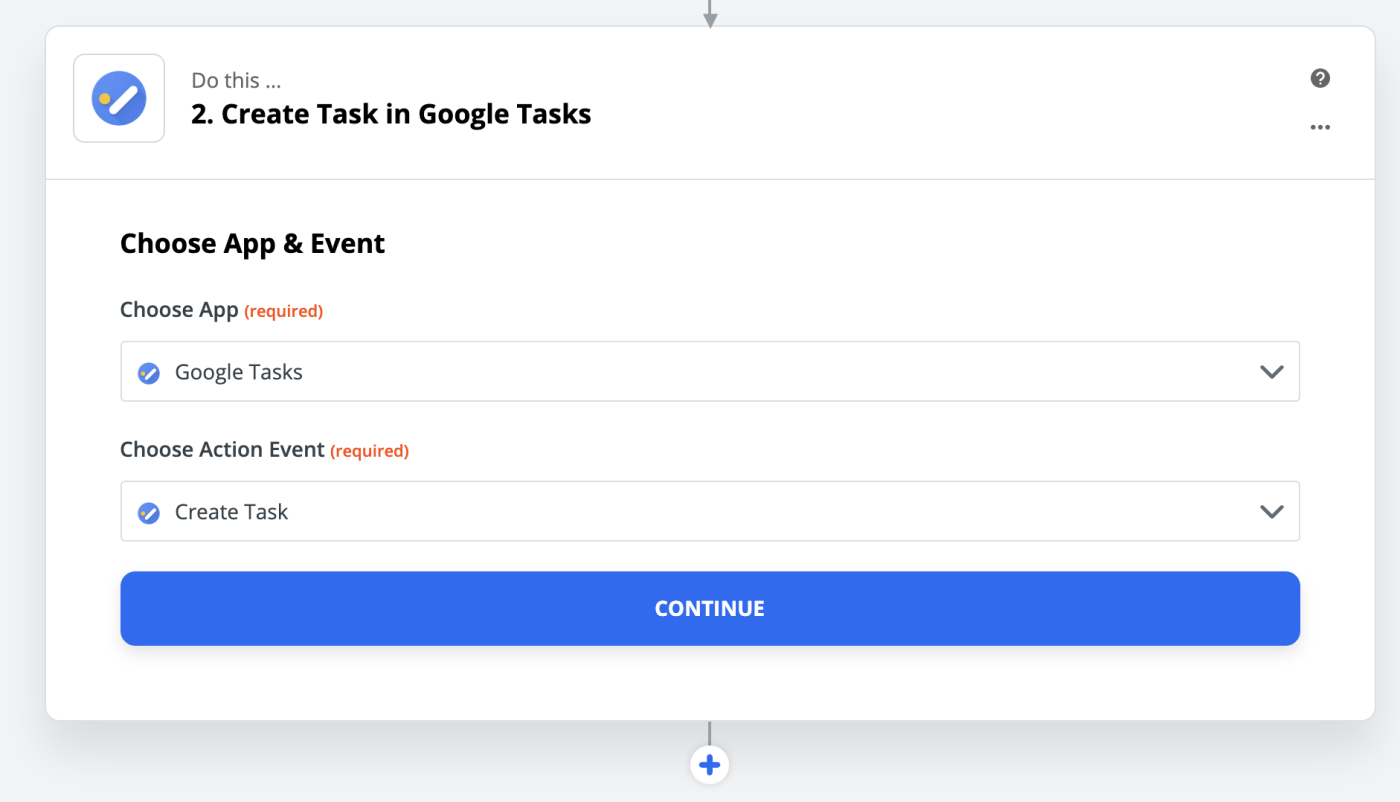 Now set up the template for your tasks. 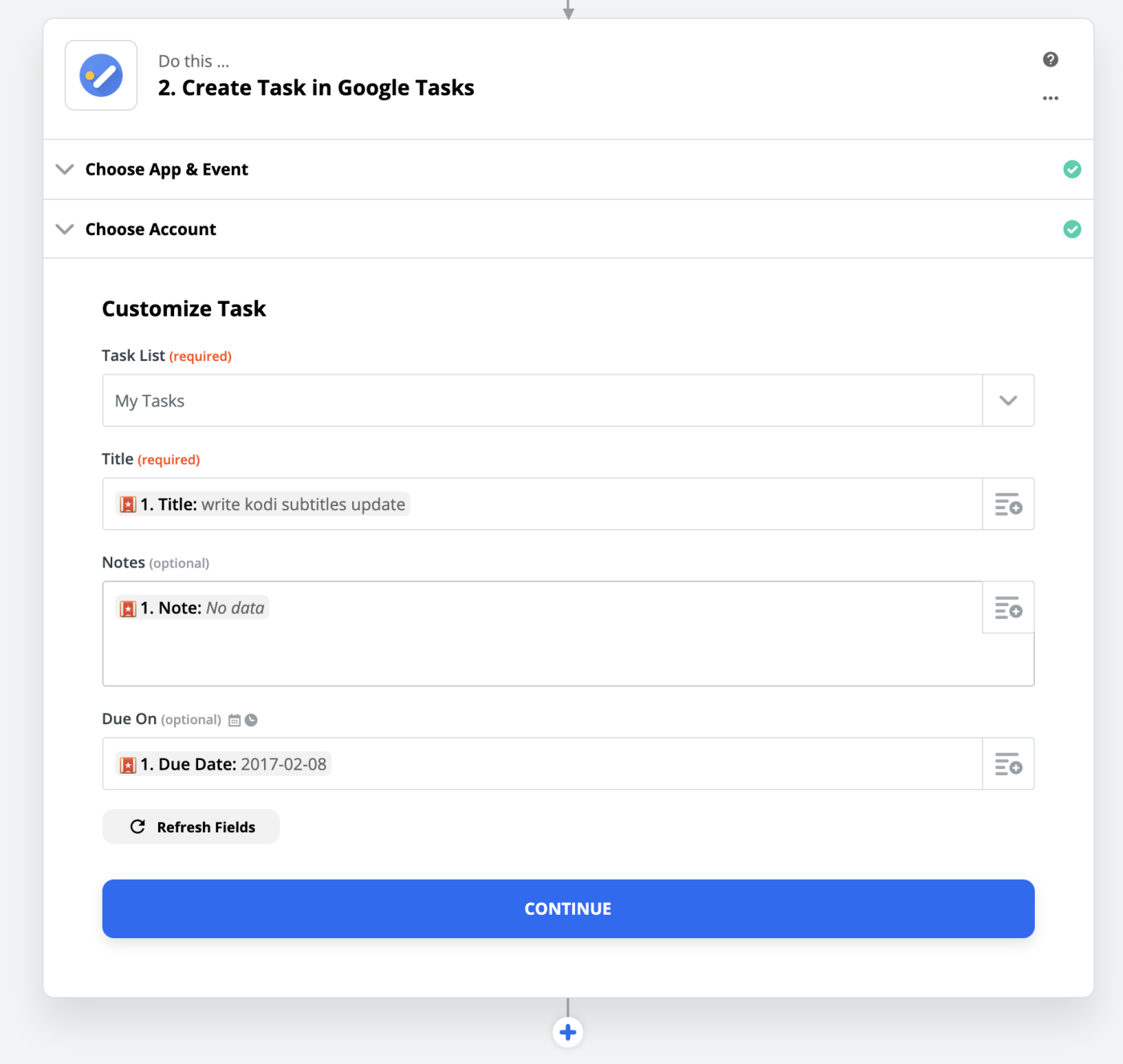 Note that you can map things like the title, notes, and due dates of your Wunderlist tasks to your new app using fields. Simply click the fields button (it looks like several horizontal lines with a small plus sign), then select what you want to map to where.

Click Continue when you're done, then test your Zap. When everything looks right, you're ready to use your Zap. Now for the fun part: You can check off your tasks in the Wunderlist group you chose earlier and they will show up in your new app pretty much instantly. 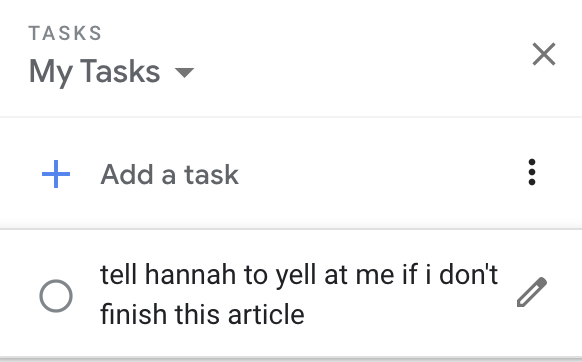 This isn't perfect: It only works with one list at a time, meaning you'll have to edit the Zap for every list you want to migrate. Copy and pasting might be simpler for short tasks. But if you've got a massive backlog of tasks to migrate to an app without a migration tool, this method works. Give it a shot if you're stuck.

Why is this happening?

You might be surprised that Wunderlist is shutting down, or you might think that it happened years ago. Both thoughts are reasonable.

Wunderlist remains one of the best to do list apps on the market, and it's also quite popular—it's one of the top 50 apps here at Zapier, for example. This is not an application that's shutting down because of a decline in quality or popularity. This is planned demolition, and if anything, one that's behind schedule: Microsoft was going to shut down Wunderlist back in 2017, but ultimately opted not to.

That might happen again, but I still think Wunderlist users should migrate sooner rather than later. I personally use TickTick, and am really enjoying it. You should take some time to try different apps and see what works for you. I wish tech companies would stop buying apps only to shut them down. Google did this to Sparrow, a macOS email client I'm still mourning nearly a decade later. Microsoft previously did this to Sunrise, one of the best calendar apps you can't use anymore. I'm sure you can think of more examples, and it's a bummer. At least, when it comes to do lists, there are a lot of great options. I hope you find one you love.