Why it's time to buck traditional pricing structures

How changing your pricing model can attract new customers

When I left my job as a lawyer to start a software company, what surprised me most were the words "recurring revenue."

These words, which were everyone in Silicon Valley, were never uttered at my law firm. Rarely did law firms charge on anything other than the billable hour—approximately one monthly car payment for each hour. Recurring revenue was about a subscription model, something we'd never even entertained.

Even in this rapidly evolving technological landscape, traditional ideas about packaging products to consumers continue to dominate. And it's not just about law firms. New businesses, for all their hard work and dedication, have a tendency to take it for granted, focusing mostly on what the product is, and not enough on how it's being packaged, priced, and presented to consumers.

How many clients were we losing by sticking to the same old pricing models, by failing to present more options to the consumer?

As you scale your small business marketing, take a look at these 4 ways to use marketing automation to grow your business.

Historically, entire industries have been stubborn on changing their standard pricing structures. Client services industries (including legal and accounting firms) have been famously inflexible: practices like billing on the hour have been all but woven into the fabric of these business models. There's simply no other way to go about it, we're taught.

The truth is, there are plenty of other ways. We're seeing innovators in these fields experiment successfully with flat fees, subscriptions, and more tech-forward approaches to billing and delivery.

And software companies, you ask? Those building the most innovative tech? They too are just starting to mix things up. Until recently, it was all about licensing and one-time download models for everything from music to office suites. But a reevaluation of how access to software can be delivered to consumers has led to things like bottomless streaming and the bundling of various creative services.

In both cases, what appeared to be a best practice for so long turned out to be a limitation.

The lesson here is not to get too comfortable with practices that may have worked in the past—they might not be the best solution in the present.

When we first started Documate, we were victims of the old approach. We started as a single consumer-facing product called HelpSelf, which helped domestic violence survivors get legal remedies online.

But our payment model didn't make sense. We charged $15 per set of documents generated. Why? Because that seemed to be how LegalZoom and Rocket Lawyer did it. But without a funnel of clients who were already coming to our site, we were spending more than $15 in Google Ads to get them there. If we had been a legal aid organization with a strong brand and healthy inbound interest, this pricing model would have worked. But we had just gotten started.

Luckily, we iterated quickly. Our customer feedback led to us switching our model entirely—to instead serve the legal aid organizations and law firms who had the inbound interest. That was the genesis of Documate.

Now, atDocumate, we no longer build specific, subject matter-specific tools. Instead, we allow legal aid organizations and law firms to build their own web applications on our platform, without using any code. We're a no-code document automation and workflow automation platform.

We only survived because we listened to our users and iterated on our pricing and target audience quickly.

Bundling products and services together runs so sharply against the conventional wisdom in some industries.

Shishir Mehrotra, the CEO of Coda, wrote a paper called The Four Myths of Bundling: it puts to rest many negative assumptions we have about bundled services. Instead, it argues, bundling is a new framework with which businesses can better understand their products and consumers to optimize growth.

One of the more harmful myths about bundling has to do with the allocation of revenue within a bundle.

What that means: bundles can appear to be a bad deal to a consumer. Let's take the example of the cable provider. Most people have a difficult time understanding why they should pay for hundreds of television channels when they watch only a few of them. And while this seems like a good intuition, it's based on the false notion that revenue within a bundle should be allocated based on usage alone. According to Mehrotra, what gives a product its value in a bundle is actually its "marginal churn contribution." In other words: how would consumers react if the specific product were to be removed from the bundle? For example, ESPN gets a larger share of the revenue from cable providers than the History channel because removing ESPN would cause a greater stir in the consumer base. While I personally love History, many people wouldn't notice if it disappeared from their bundle.

Plus, consumers don't necessarily value products based on how much they use them—sometimes just knowing they're available to use is enough. After all, nobody wants to use health insurance, but they want to know that they can use it when it's needed. Similarly, nobody wants to be facing a serious litigation or to have a fatal accident, but they want to know they have a will in place or access to a lawyer should either of these things happen. 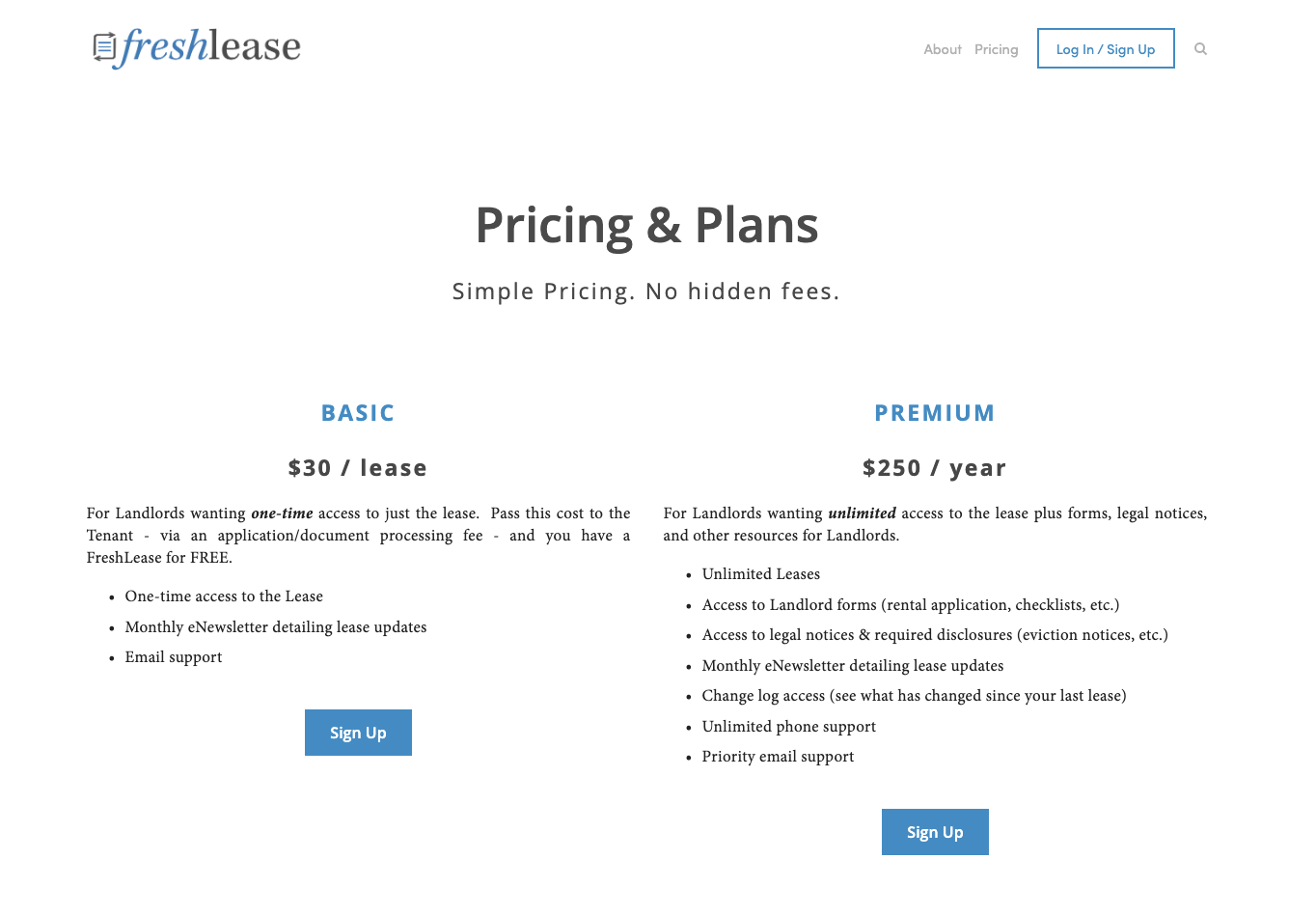 The pricing page from FreshLease.com: a great example of how a lawyer who used to work on the billable hour took a standardized document and built two different business models out of it.

This applies equally to the legal industry, where the cost of hiring an attorney is so high, but "insurance"-type plans are on the rise, with consumers buying low-cost subscriptions to monthly legal advice. One idea I've always wanted to see explored in legal is combining legal with other industries. For example, why don't we combine legal products with the court reporting services and mediation services, all as one bundle before the case even starts?

Distinguish between superfans and casual fans to expand your market size

When you're deciding on your tiers, you'll want to distinguish between your "superfans" and your "casual fans." Superfans are consumers who readily pay retail for a product and who actively seek that product out, whereas casual fans can be expected to lack one of those qualities.

The Ultimate Fighting Championship (UFC) is a perfect example of a superfan business: it relies on those die-hard fans who seek out a specific fight and are ready to spend the $50 to watch it on pay-per-view. By contrast, the NFL is primarily a casual fan business, whose viewers might seek out football games but can't typically be expected to pay anything additional to what they already pay their cable provider for access.

So why is this important, and how can making this distinction do anything for the growth of your business? Well, it can help to expand your consumer base beyond the already reliable superfans.

The recent evolution of the music industry is a useful illustration of exactly how this works. It was once a superfan industry, reliant on consumers seeking out specific artists or songs and paying retail value for a CD or a digital download. It's now become a casual fan industry, in which consumers pay a flat rate for access to their favorite artists and songs, as well as access to a seemingly infinite supply of music they otherwise wouldn't pay attention to.

Another beautiful thing about the bundle is the wealth of creative possibilities at your disposal when bundling products together. Look at the undeniable commercial success of the collaboration between Spotify and Hulu, two seemingly unrelated products and industries. By focusing on the casual fan overlap between the two platforms, both were able to optimize growth in the form of a bundle.

As you're making changes to your billing model, think not only about how you can keep your superfans, but also about who your casual fans could be. You might be able to provide a DIY, affordable version of your product to these casual fans and grow the size of your market. Alternatively, who are the partners you can team up with to promote your offering as an add-on product or service?

By finding your casual fans and coming up with a package that might work for them, you have the potential to reach so many new customers.

As you're making changes to your business model to scale your revenue and attract more users, think about how and why you set your pricing in the first place. Then, examine how you could be bundling your products differently, either within your own business or by teaming up with other complementary products. Don't be afraid to experiment and A/B test your different models. And finally, keep your superfans close, but recognize the value and market size of the casual fan.

Dorna Moini is the CEO of Documate, a no-code document automation platform and legal app builder. Prior to Documate, Dorna was a litigator at Sidley Austin, and she currently teaches the Legal Innovations Lab at USC Law School.