Behind the Scenes of Pizza to the Polls

No one likes standing in line for hours, much less for a few minutes. When you're at the grocery store or the bank, you do it because you have to. But when it comes to voting, long lines can be the hurdle that prevents people from taking the action that truly matters and can make a difference for us all.

So we created Pizza to the Polls.

Run by three members of the Zapier team—Noah Manger, Scott Riker Duncombe, and myself—as a side project in our spare time, Pizza to the Polls has delivered over 10,000 pizzas to 568 different polling locations and collected over $400,000 in total donations. And it basically runs itself.

What Is Pizza to the Polls?

The feedback was immediate and immense: It fortified hungry voters in line, cheered up beleaguered poll workers, and put followers and friends to work finding other voters in need so we could send in more ‘za.

Pizza to the Polls is a non-partisan non-profit organization founded around a singular mission: make in-person voting suck a little bit less by giving pizza to the people who are taking that sometimes inconvenient step of going out to vote.

We came up with the idea during the weekend before the United States 2016 Presidential election in response to unprecedented long lines across the US at early voting locations. In a few short hours, we came up with the name, a Twitter handle, and a website to collect donations. Pizza to the Polls was born.

In 2016, we took in reports of long lines via Twitter and submissions to a form on our website, and then we sent out pizza deliveries funded by donations.

The feedback was immediate and immense: It fortified hungry voters in line, cheered up beleaguered poll workers, and put followers and friends to work finding other voters in need so we could send in more ‘za.

What started out small in a few polling places in Ohio, Florida, and Illinois quickly ballooned into a nationwide effort. By the morning of Election Day, we had raised $10,000 and faced the seemingly impossible task of spending it all before the polls closed. As the day progressed, we were bringing in donations faster than we could place orders, so we recruited and trained a team of over 20 volunteers from across the US, England, and Australia to order and coordinate the delivery of 2,368 pizzas to 128 polling places across 24 states. By the time the dust had settled, we had raised over $43,000 and over 25,000 slices of pizza had been delivered.

How We Made Pizza to the Polls Work Better in 2018

We still had about 20 volunteers, but with automation, we went from sending about three pizzas per minute to 13 per minute—- spending nearly a quarter million dollars on pizza before the last polling place closed up on Election Day.

Going into the 2018 election season, we knew we needed to scale up our operations. To make sure we had more time to focus on the most challenging parts of our process, we decided to automate as much as we could to make the human part of ordering pizzas as easy as possible.

We recognized two tasks that had taken up too many volunteer hours in 2016:

It's kind of a logistical nightmare, but one that's solvable if you can get all the moving parts working in sync. If you're organizing an event or even a movement, you can probably relate. Here's how we did it.

We used app automation tool Zapier to streamline as much as possible. We built a Zap (what we call automatic workflows) to take submissions from our website and turn them into pizzas. 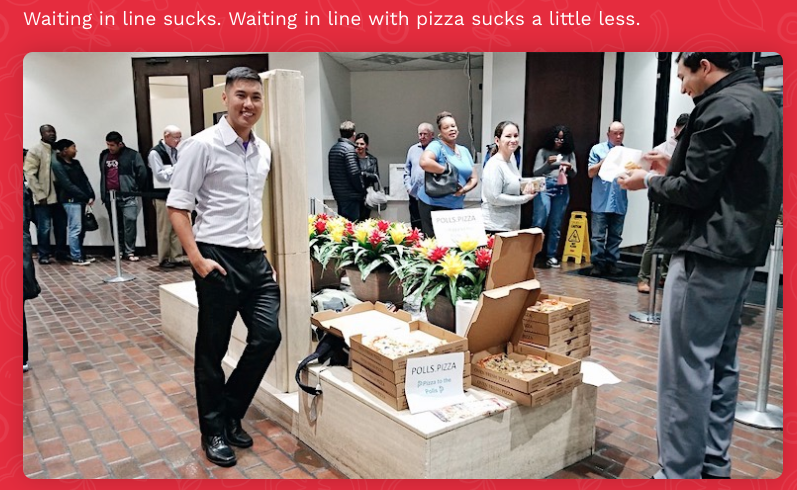 This Zap did a lot of heavy lifting for us: We caught information with a webhook—these were the submissions from our site—and would then run it through filters, Slack, Google Sheets, more webhooks, some custom coding, and the next thing you know, we had verified polling place addresses and found local pizza places. And we made sure that information was back in a Google Sheet and a Slack channel for tracking.

Our Zap was definitely on the more complex side of things, but at its heart were a few simple Zaps:

Get Slack notifications for new information from a Webhook

Send Saved Messages in Slack to a Google Spreadsheet

Part of what we love about Pizza to the Polls is how we get to connect with new people, and we wanted to make sure our volunteers felt welcomed when they joined. So we created a Zap that sent a welcome message in Slack to each new volunteer, including a guide to our pizza ordering processes.

And we had another Zap that triggered whenever a new pizza order was set as "out for delivery" in our master Google Sheet. This Zap sent out a tweet that let our followers know about the incoming order. To keep these tweets interesting, we used Zapier’s Formatter app to randomly select from one of 30 funny messages to get our followers excited about the pizza. 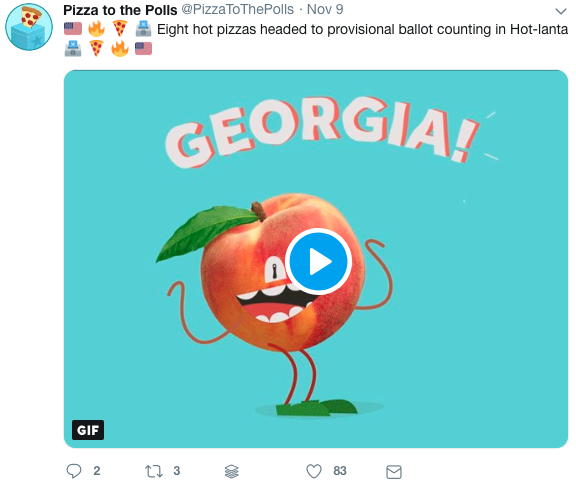 Here's a simplified version of our Zap that creates a Tweet when a row in Google Sheets updates. It's the core of our Zap, just without the pizza wizard:

Despite the explosion of donations and polling place submissions, our organization didn’t really increase in size. We still had about 20 volunteers, but with automation, we went from sending about three pizzas per minute to 13 per minute—spending nearly a quarter million dollars on pizza before the last polling place closed up on Election Day.

Pizza to the Polls started with a simple idea: What could we do from home to help people who turned out to vote? From the seed of that simple idea, we started creating a structure to make our job easier: a spreadsheet for tracking orders, a website to gather submissions, Twitter to let the world know and get support.

This year we took the next step—simplifying and scaling our organization with automation and streamlining the parts we learned took a lot of time. And in the end, more people who voted were rewarded with pizza. What's not to love about that?

Katie Harlow is Support Manager at Zapier and lives in Portland, Oregon. She’s a candy and breakfast food enthusiast who spends a lot of her free time with her cat named Cat.