Our lives are just screens now. There's work and entertainment, sure, but in 2020 every meeting and most socializing is also mediated. Reality feels like a distant memory.

I spent too much time on screens before all of this, and I remember feeling like it was cutting me off from the people around me. That's strange, in retrospect: now any time not spent on screens makes me feel isolated. It's nice that everyone is still in my life, but all of the Zoom calls and text messages make the physical world seem...distant. So I've started using paper for more things.

It's weird—I've always been a digital-first kind of guy—but something about the world as it is right now makes pulling out a pen and jotting something down feel comforting. I thought I'd ask my Extremely Online Coworkers here at Zapier if they do the same thing—it turns out they do.

We've written about how to build the perfect productivity system with paper notebooks before, and a lot of it is about designing a system that works for you. Here are some things that have worked for us in connecting back to the physical world—hopefully you'll find one or two of them inspiring.

Video chats are the example of what was once an in-person experience—meetings—becoming digital. Chris Dopuch, Zapier Frontend Software Engineer, brings things back to earth by taking paper notes. He sent me this example.

"It's just easier to jot something down on paper in a meeting," Chris told me. "Often these items end up moving into Todoist or Jira if I don't immediately cross them off."

Still learning the whole video chat thing? Check out our tips and tricks for Zoom, and learn when to mute yourself during a Zoom call.

Sanne Stevens, Team Lead for Zapier's Core Support team, switches between paper and digital task management seamlessly. "I generally take notes on paper to then organize them digitally after," she said, before adding that she also goes the other way. "Other times, I print out my to-do list and then write on it or strikethrough tasks manually—makes it feel real."

It's something worth keeping in mind: using paper doesn't mean you can't use to-do list apps and vice versa. You can use both.

Dump the contents of your brain onto paper

Paper is also an excellent tool for getting ideas out of your head. Nick Simard, Zapier's Senior Community Moderator, uses paper for something he calls Brain Dumps.

I have ADHD, so there are always a ton of ideas swirling around my head, and at any given time one of them might take hold and lure me away from the things I should be working on. I literally just scribble (often messily) all the things that are bogging me down, and that makes me feel like I've expelled them from my mind. I will likely never consult the brain dump ever again, but it's on paper if I ever want to check.

This makes sense to me, which is probably why I started using a similar system recently, for article ideas. I have a stack of old business cards on my desk. If I think of an idea for an article, I could stop what I'm doing. Instead, I just jot it down on one of the cards and get back to work. 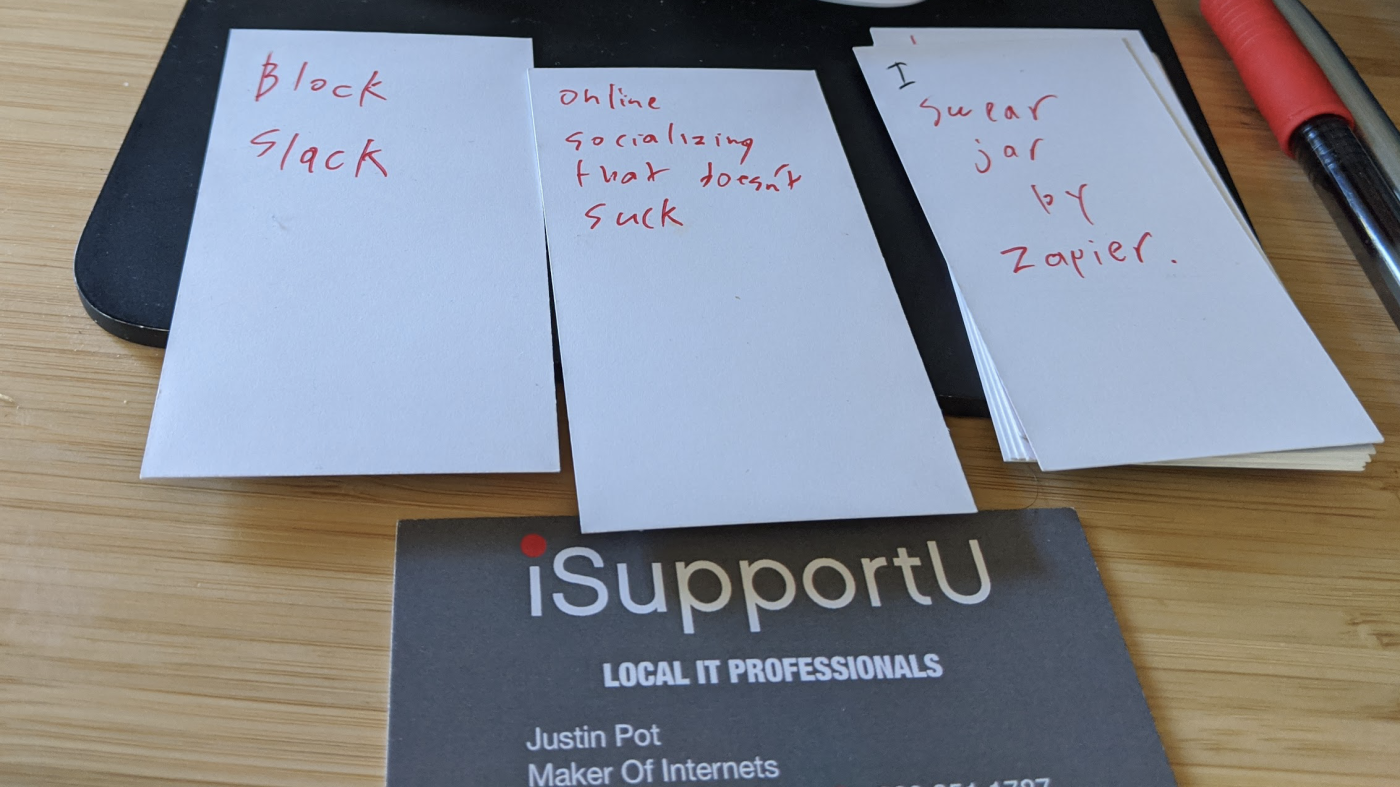 This company does not exist anymore, but you can probably find some embarrassing photos of me on their old Facebook page if you want to do some digging.

Later, when it's time to pitch article topics, I pull out the cards and flesh out as many ideas as make sense. I like being able to physically handle the cards, move them around on my desk, as I try to visualize the next week's work. This article once lived on one of these cards, actually, and now you're reading it. I guess the system works.

I'm obsessed with finding the best to-do list app. But it turns out quite a few of my coworkers don't use a digital system and rely on paper instead. Sure, recurring tasks aren't automatic, there's no API, and you can't really use any automations. That's all outweighed by how tangible—and flexible—paper is.

"I would be a mess without my handwritten to-do list," said Chris VanderKolk, Integration Engineer here at Zapier. "It seems to encode something in my brain that typing doesn't."

Hannah Herman, Zapier's copywriter, feels the same way: "I have used a physical, handwritten to-do list for a long time," she told me. "It just sort of cements things in my brain better." Hannah's setup involves a specific planner, where each two-page spread has one page with the weekly calendar layout and one page of lined paper. Here's what that looks like. 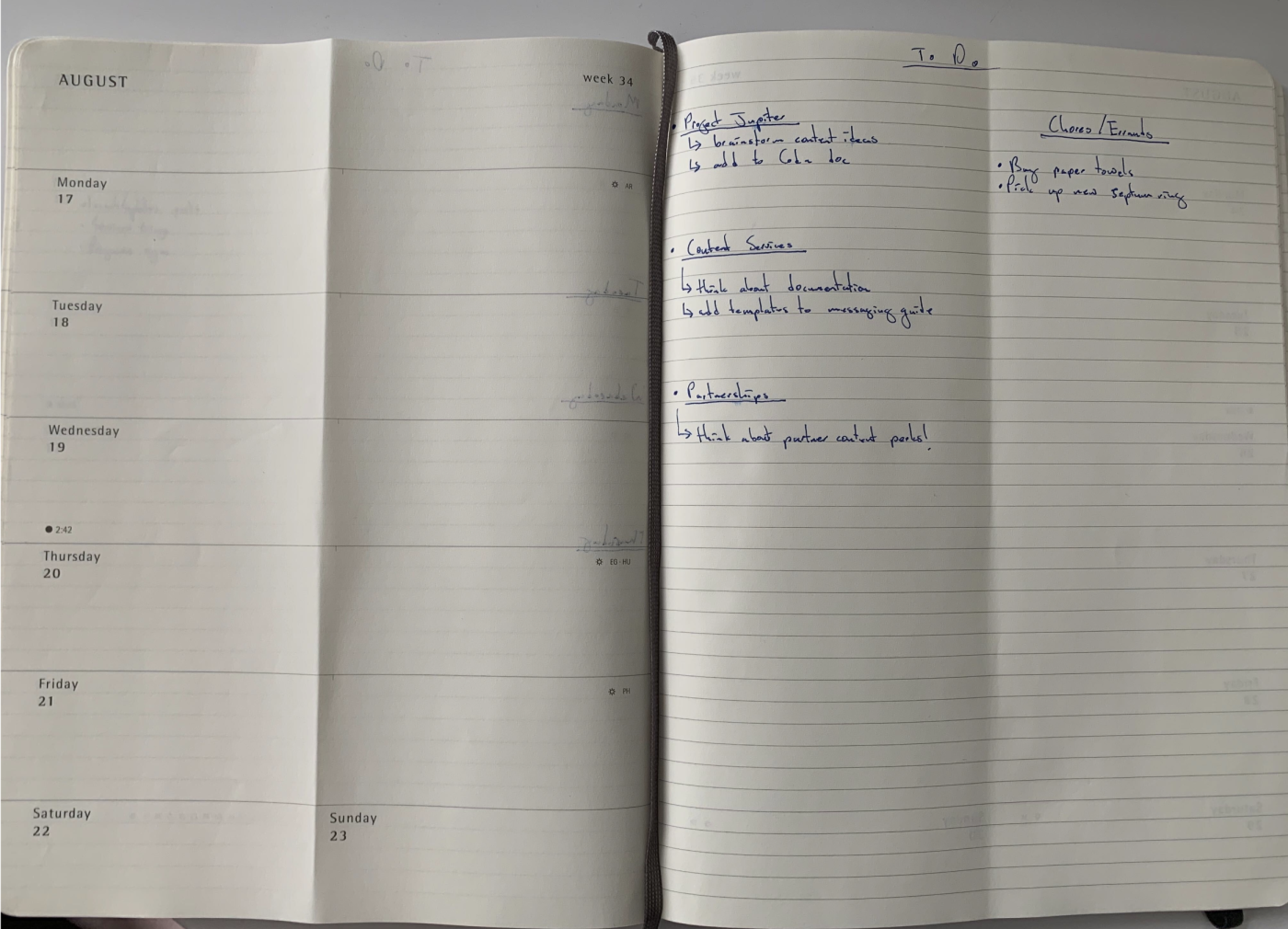 I've tested a lot of to-do apps in my time, and one thing that always bugs me is balancing tasks with a specific due date with tasks I can accomplish whenever. Most apps make it easy to pay attention to one or the other—few are great for doing both. This paper system does that flawlessly.

And you don't need to purchase a specific planner for a system like this. Katie Redderson-Lear, Zapier's Escalations Team Lead, made a similar system for herself using a notepad and a book of graph paper. 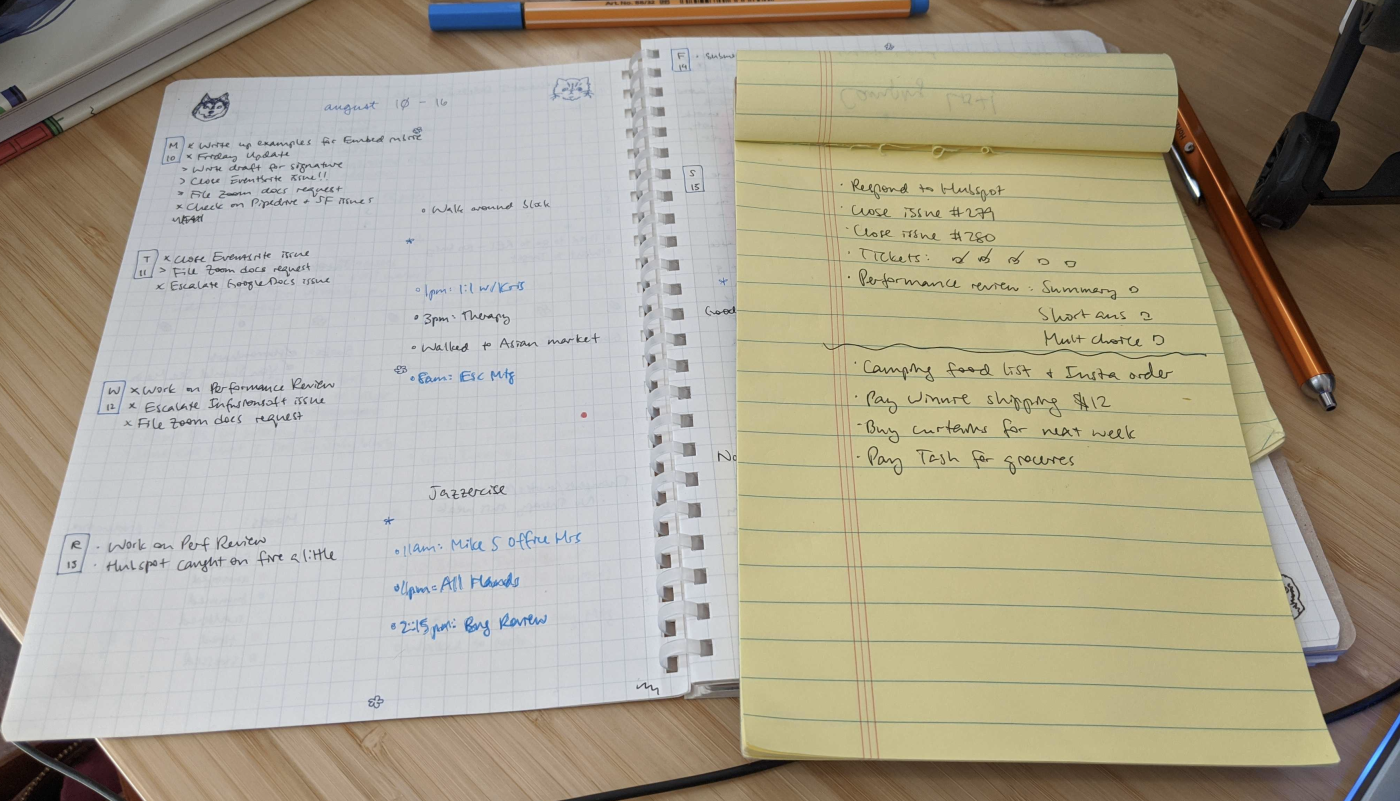 Katie informed me that she did not, in fact, draw the cat or the dog. Turns out they are stickers. I was disappointed too.

Paper is also totally freeform—no app can match it. Doug Gorley, Zapier Site Reliability Engineer, takes full advantage of this for his setup, which includes some artistic flourishes. 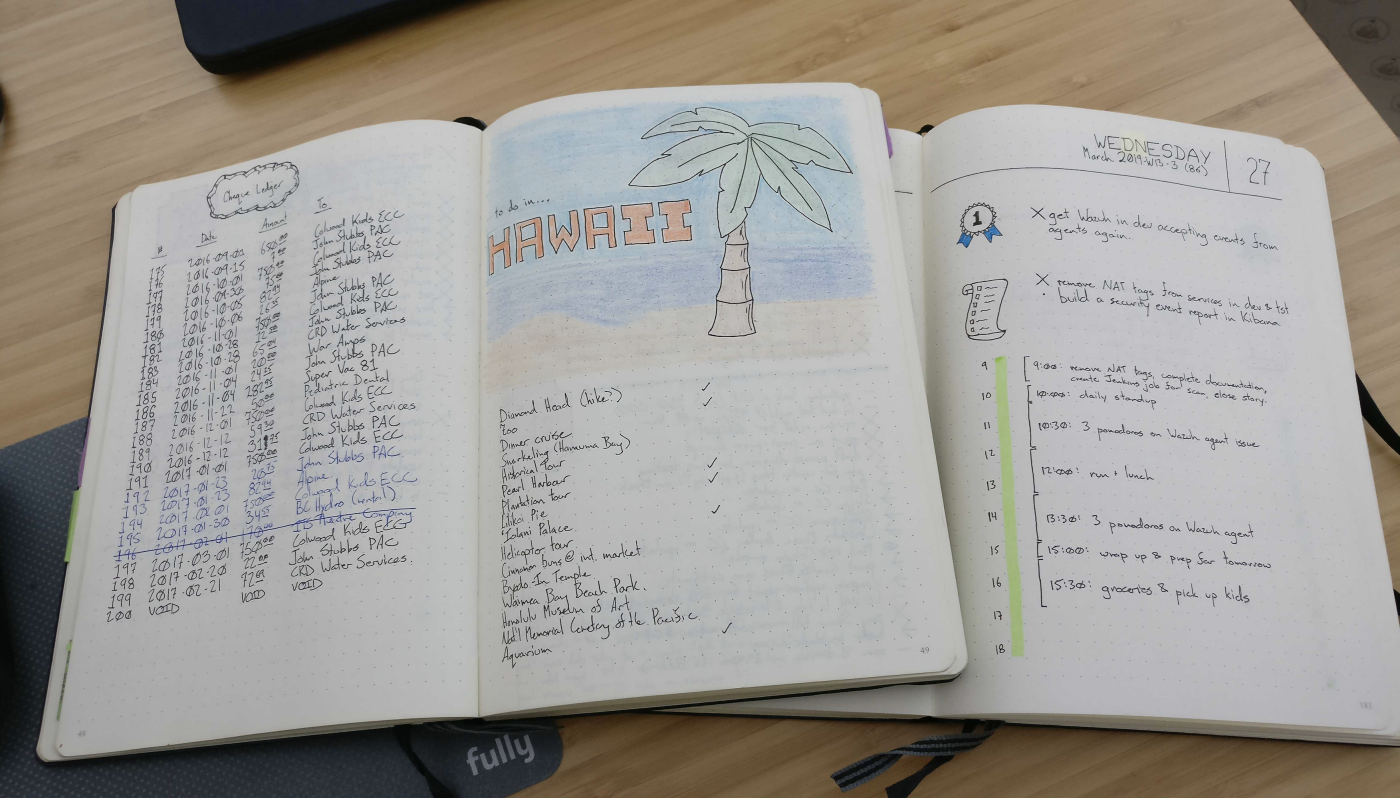 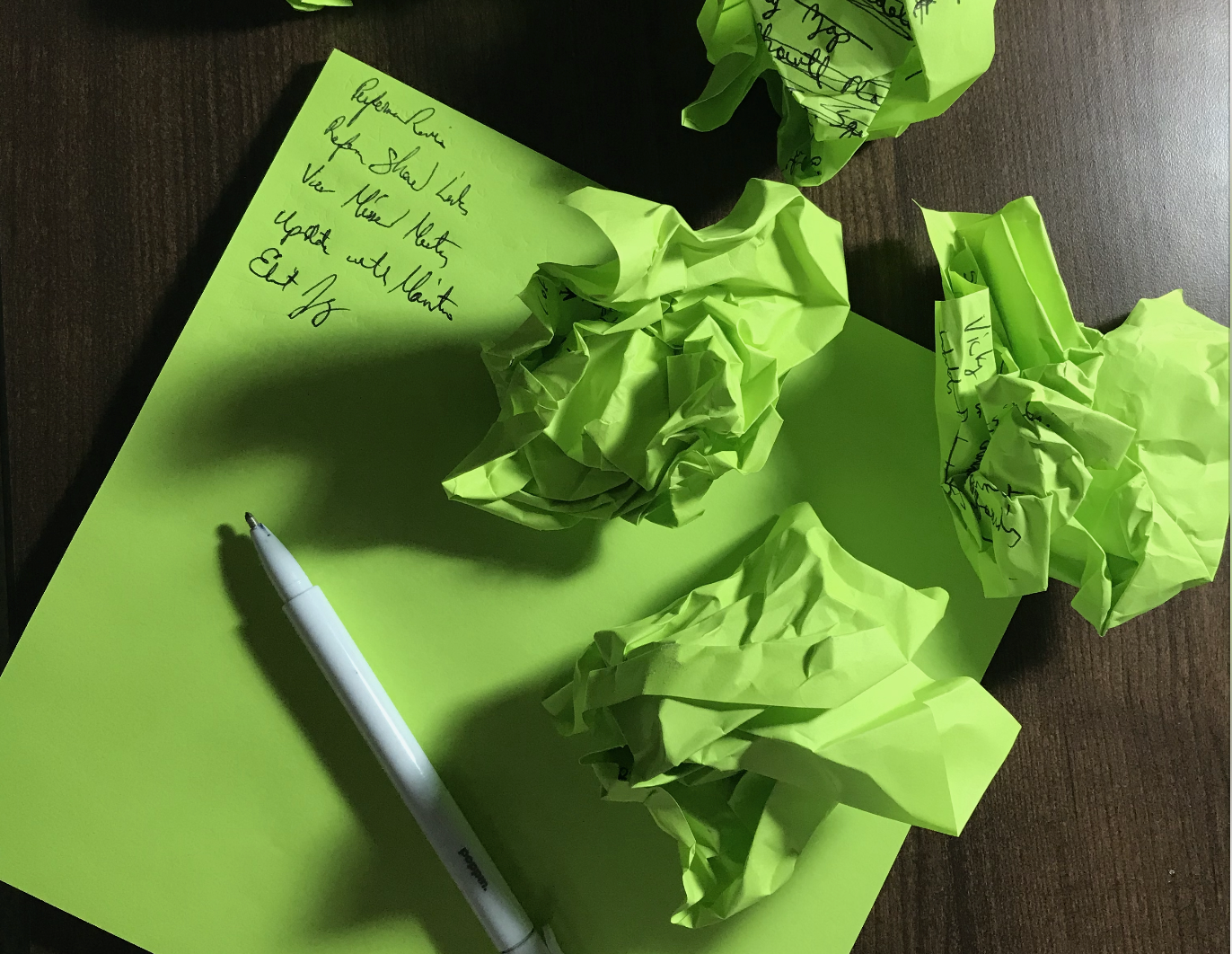 Stasha admitted she staged this photo for me, but I like it anyway.

"Writing my to-do list on a gigantic Post-it Note somehow makes it seem more real," she said. "Plus, they can't be hidden by minimizing a browser window."

Caleb Gonzalez, a Senior Customer Champion at Zapier, sticks his tasks to his monitor so that they're always right there. 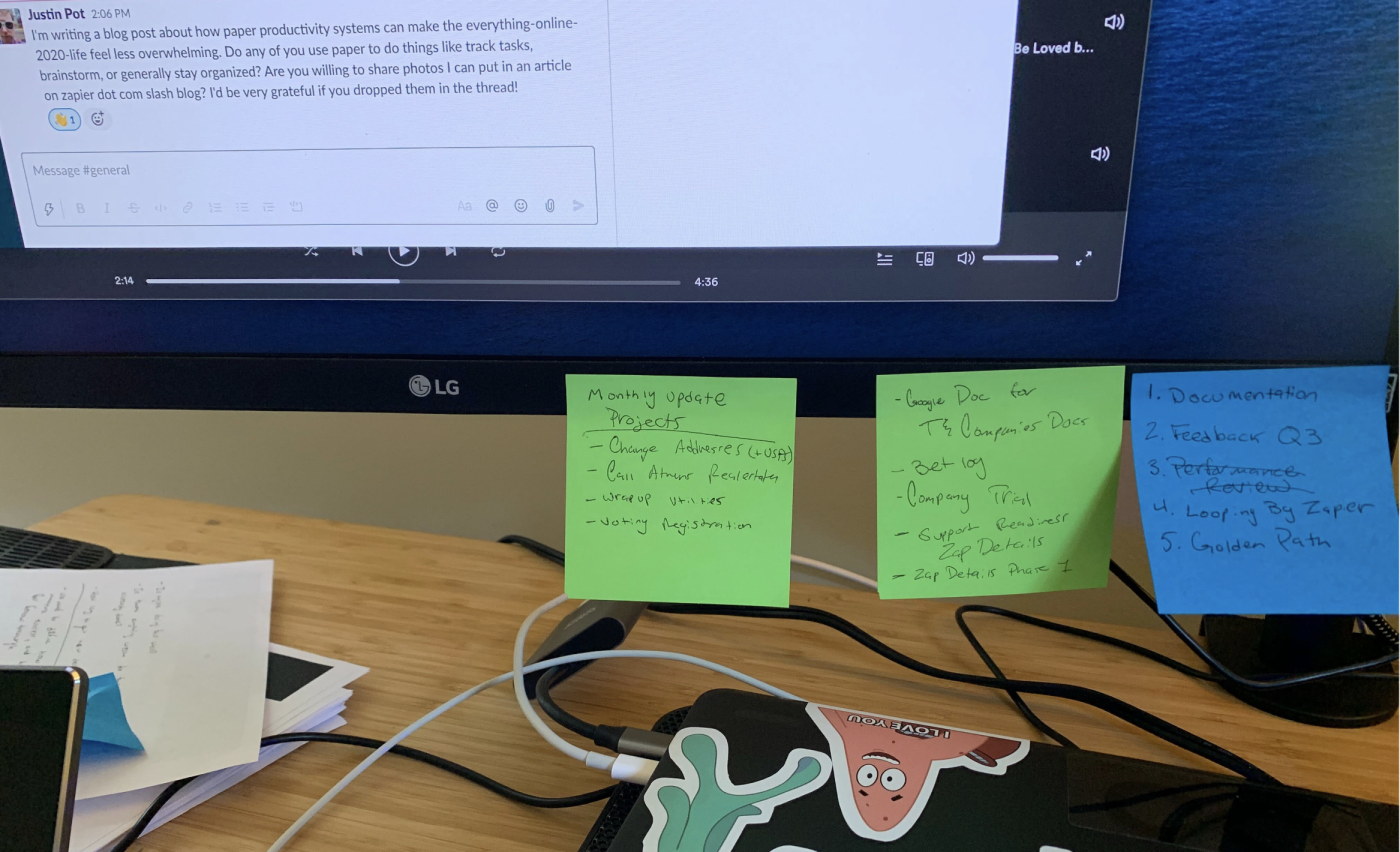 "I've struggled to use online to-do lists because I stress more about automating it and managing my list than actually working," Caleb told me. This makes sense to me. We're all about automation at Zapier, but remember: more complicated isn't always better. A sticky note on your laptop is about the simplest approach to task management you can imagine, which is exactly why it works so well for some people.

Build a sticky note kanban board

If you want to take the sticky note system to the next level, check this out: a full-blown sticky note kanban board. 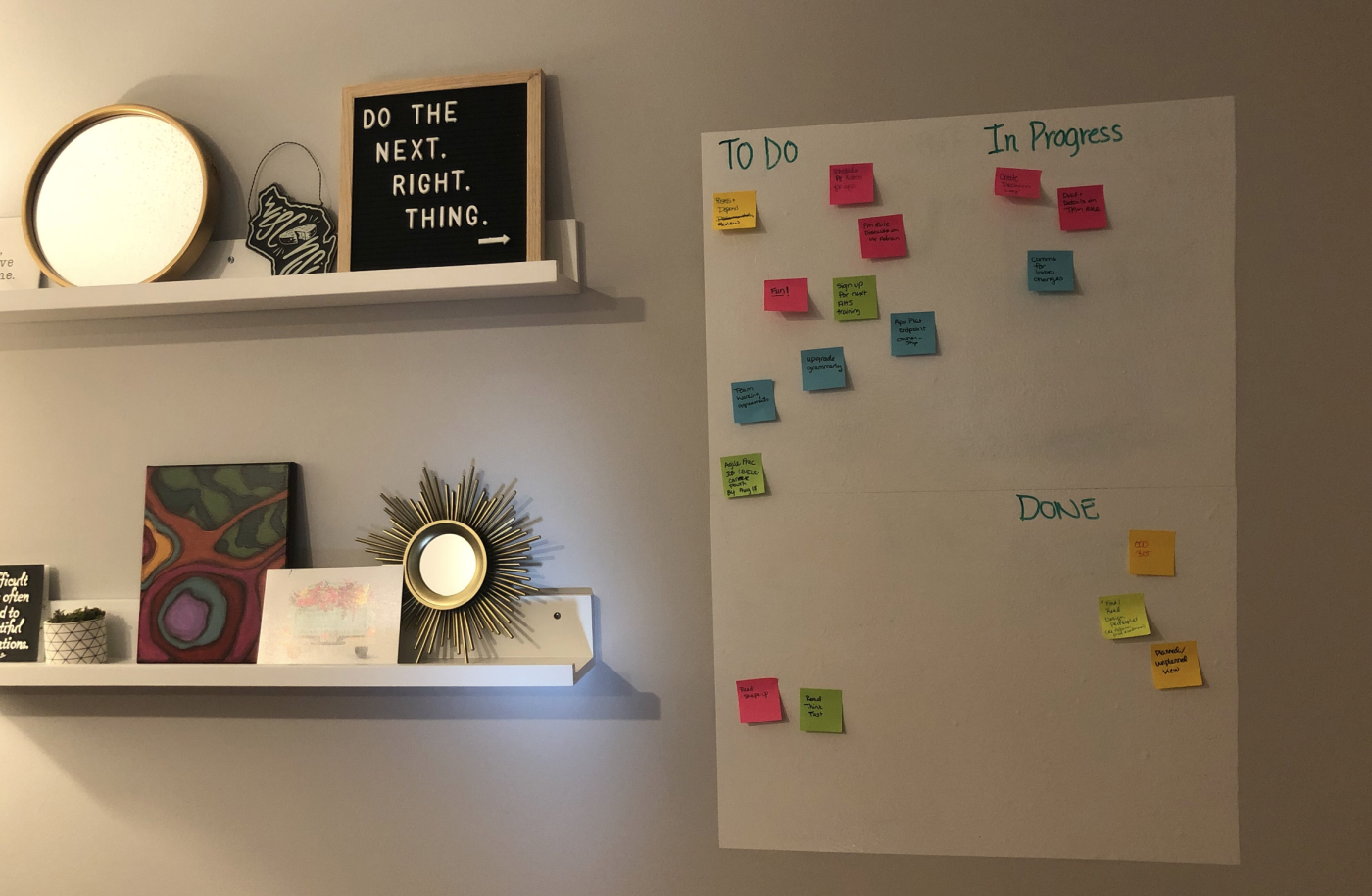 Heather Winter, Project Manager at Zapier, has two of these on her wall: one for work, one for home projects. New tasks are added to the To Do column, then moved to In Progress when work begins, then ultimately moved to Done. It's a great example of how paper can make the intangible (a series of tasks) feel tangible (physical pieces of paper stuck to the wall).

There's also something very satisfying about the idea of tasks moving from one section of the board to another. I love this setup.

There's so much more

For anyone used to paper, there's nothing revolutionary here. But if you've been using a computer for everything for as long as you can remember, like I have, there's something liberating about the pen. You can write wherever you want, switch from words to drawings in an instant, and generally not worry about structure.

These are just a few ideas outlined above, but there's so much more you can do. Mind mapping software is great, but in my experience, you can't beat paper when you need to quickly map out some ideas. The same goes for flowcharts or quick designs. Take it from someone who avoided paper, studiously, for a long time: it's more useful than you think.

Screens dominate our lives enough. Switching to paper isn't going to fix our current reality, but it might help you feel more connected to it—and maybe get a bit more done.