Five tips for actually succeeding at your new job

When I was hired at Zapier back in June, I immediately panic-Googled "how to succeed in a new job." The results were soul-crushing.

While "network constantly" and "come in early every day" might sound like good advice at first blush, there's something a bit reductive about it. After all, you're not looking for tips on how to maximize your output, suck up to the C-suite, or seem like a hard worker; you want advice on how to actually settle in to your new environment and create habits that will serve you well in the future.

I'm lucky. Zapier puts a lot of effort into creating an enjoyable—and easy—onboarding experience. But the truth is that starting a new job will always be hard. There's just so much going on: not only do you need to learn your new responsibilities, but you also probably have plenty of onboarding tasks to complete, such as setting up all your tools. You have to meet a lot of new people. And if you're working in an industry like tech, chances are you'll also need to get some hands-on time with the product.

I'm by no means an expert, but after a few months of intense self-reflection (read: gushing about my new work to friends over beers), here are a few practices that helped set me up for success in my new role—and a couple of things I wish I'd done better.

Given how overwhelming your first day, week, and month can feel, it's normal to have some anxiety amidst all the changes. A lot of career "experts" will tell you to remain relentlessly positive and push yourself to come in early, stay late, and network all the time. But what I wish someone had told me was: pace yourself.

Set aside time with your manager and HR team in the first couple of days to talk through their immediate expectations for you. Chances are, they don't expect you to dive in to your work head-first; they know it'll take some time for you to get up to speed. Clarify what they expect you to accomplish in your first week, month, and quarter. That way, you can hold yourself to reasonable goals. And if you're too tired at the end of the day to hit up happy hour with the rest of the office, that's okay. It's better to be well-rested during the workday than grouchy while networking after-hours.

It's also important to remember that sometimes the most banal tasks can take the most time. In my case, I drastically underestimated how much time setting up all of my apps and tools would take. (As it turns out, coming up with strong passwords takes a bit of brainpower.)

Looking back, I wish I'd set aside more time for administrative tasks like that, rather than pushing myself to knock out all of my onboarding tasks as quickly as possible so that I could do "real" work. I wound up feeling exhausted halfway through the first week—and I wasn't even doing my actual job yet. Had I given myself more time to complete these tasks, I probably would have had a less tiring first week.

Figure out a filing system that works for you

We've all been there: you start a new job and, because the first couple of weeks are so hectic, you never really give yourself time to get organized. Fast-forward two years, and your Google Drive (or Box or Dropbox or desktop) are a total disaster.

It'd be nice to avoid that, right?

During your first week at your new gig, intentionally carve out an hour or so to think about all the files you'll need to store—and how you want to organize them. This hour is a great time to familiarize yourself with the filing system that your team or organization uses for shared folders, too, so you can find resources more easily.

As a writer, this tip is near and dear to my heart. I create a lot of content in any given week—and it's mostly stuff I'll need to be able to find later.

Personally, I'm a big fan of nested folders in Google Drive. On my Drive, I have a folder titled "Drafts." Nested underneath are subfolders for our productivity blog and our Updates blog. Within each of those, there are subfolders that house the different types of content I might write for each.

I also created a folder on my desktop for important HR paperwork that I might need to save for later, like all my tax forms. By creating that folder and filling it as I checked off onboarding tasks (setting up payroll, verifying my eligibility to work, and so on), I saved Future Hannah a lot of time trying to locate important documents.

To do or not to do: that is the question

This tip also extends to your to-do list: find a method that works for you early on. It'll save you serious headaches later, as your plate fills up with tasks and projects. It's not worth it to try sticking to a method that doesn't work for you, so don't sweat trying it too much; having a system is all that matters. As my co-writer Justin—who's spent months testing every to-do app under the sun—puts it:

Some people need nothing more than a list and find features beyond that to be visual clutter. Some people utterly depend on arranging tasks into projects, sorting the project using headers, and adding sub-tasks to every task. Some people live by due dates, to the extent where they need a to-do list to basically be a calendar. Others ignore due dates entirely, preferring to set priority levels. And some people combine everything.

One of my colleagues, for example, likes to write things on sticky notes. But she doesn't do anything with the sticky notes; she just knows she needs to write things down in order to cement them in her brain. I, on the other hand, know that I'm a pen-and-paper sort of person, so I researched planners that would fit my needs. 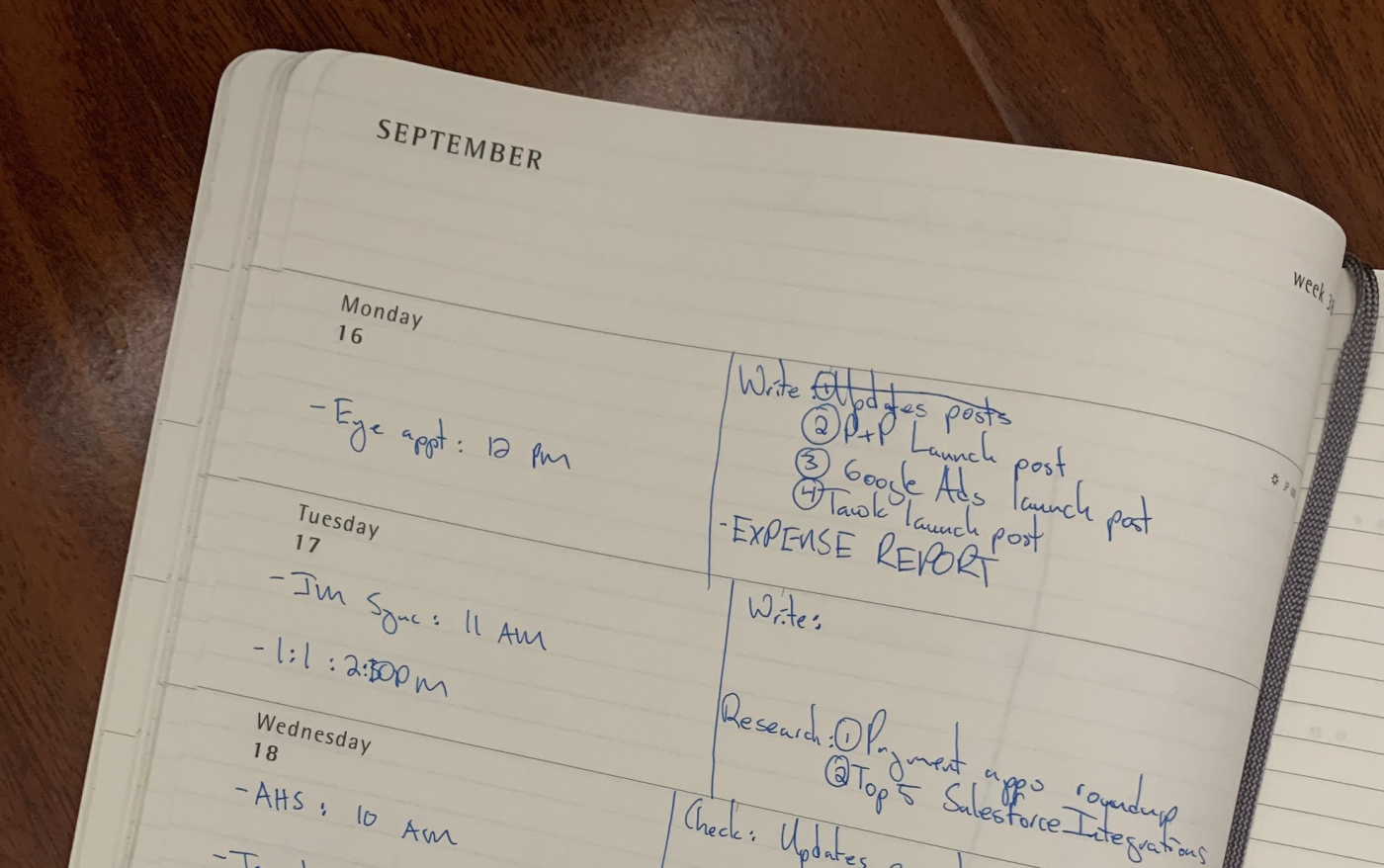 Maybe you're more digital, less analog and would prefer a to-do app. Take a moment to evaluate how you'd like to organize and track tasks and then set your app up to reflect that. Trust me: it's an "a stitch in time saves nine" sort of deal.

The point is, if you're starting a new job, there's a not-insignificant chance that one of the first things you do will be logging in to your organization's chat app.

And it can get overwhelming—fast.

One of the best things about starting at Zapier was how welcomed I felt by my new colleagues. It seemed like everyone wanted to talk to me: about my work, about my previous experience, about myself. It really helped me feel like I belonged.

But notification noise can be a real distraction during those first few weeks. It certainly was for me. There were times I'd open Slack in the morning and feel totally, completely overwhelmed by the number of notifications that had accrued while I was asleep. I also keep the Slack mobile app on my phone, which made it difficult to disconnect even when I was supposed to be working heads-down.

Instead of instantly joining all the channels, be choosy about which you join in your first few weeks.

In hindsight, I wish I'd tried to limit myself to the channels mentioned in my onboarding materials, plus a couple other "fun" channels that helped me get to know my colleagues. Limiting myself to just a few key channels in my first month at Zapier would have helped me focus on my core responsibilities.

But the best way to make sure your new job's chat app helps your productivity instead of hurts it? By customizing your Slack sidebar.

By clicking the Save button on important messages, you can collect them in the "Saved Items" section towards the top of your sidebar. "If you’re an inbox zero fan," Slack also notes, "you can select to show only unread conversations in your sidebar."

You can also mute channels that you need to be in but don't want to receive notifications from. It might take a couple of weeks to figure out which customizations will work for you, and they'll probably change as you get settled into your new role and take on more work. But initially, try your best to not stress too much over Slack. Or email. Or semaphore. Or whatever it is your team uses to keep in touch.

On literally my first day at Zapier, my new manager announced that our team was being renamed—and restructured. This change was a huge shift for everyone involved, including other teams that we collaborate with.

In some ways, this massive change couldn't have come at a better time. It forced me to ask a lot of questions about my role, my team, and where everything fit under the umbrella of Zapier.

Even if your team isn't going through a transition, taking time to learn about the company's organizational structure can help you adjust more quickly to your new work environment. It's also a good time to ask about job-specific responsibilities and expectations, and to figure out where your work might overlap with your colleagues'.

This tip is especially useful if you're starting a role that will do a lot of cross-functional or collaborative work. Knowing who owns what gives you context for where your work fits within broader company initiatives. Not only does that put you on a better footing to do quality work, but it also makes your work more meaningful because you see how it maps to larger objectives.

Finally, it's important to remember that you likely won't settle in completely on your very first day—or even in your very first month. Starting a new role is challenging, and often there aren't any shortcuts to adapting. You just have to give yourself time.

The corollary here is: know when you need help and don't be shy about asking for it. Your manager's job is to support you. If you need anything, speak up; giving you the resources to succeed is part of what they're paid to do.

Likewise, lots of companies have dedicated repositories full of self-help resources. Whether you want to enroll in benefits or need to find out how to access your continuing education budget, searchable documentation can be a lifesaver when it comes to answering common employee questions.

Starting a new job should be exciting, but it will always be a little stressful. Keep in mind that you're only human. You wouldn't sign up for a figure skating class and expect to nail a triple axel on the first day—so adjust your expectations, find systems that work for you, and be kind to yourself in your job, too.