Workers have long feared automation would take their jobs, and COVID-19 intensified those worries. But despite the common narrative, automation isn't a competitor for human jobs, and there's no evidence of a robot revolution coming to fruition anytime soon.

The future of automation is about how technology can support humans, especially in the small and medium-sized business community. Software automation has grown at scale, enabling workers to be more efficient and giving them time back to do things only people can do. 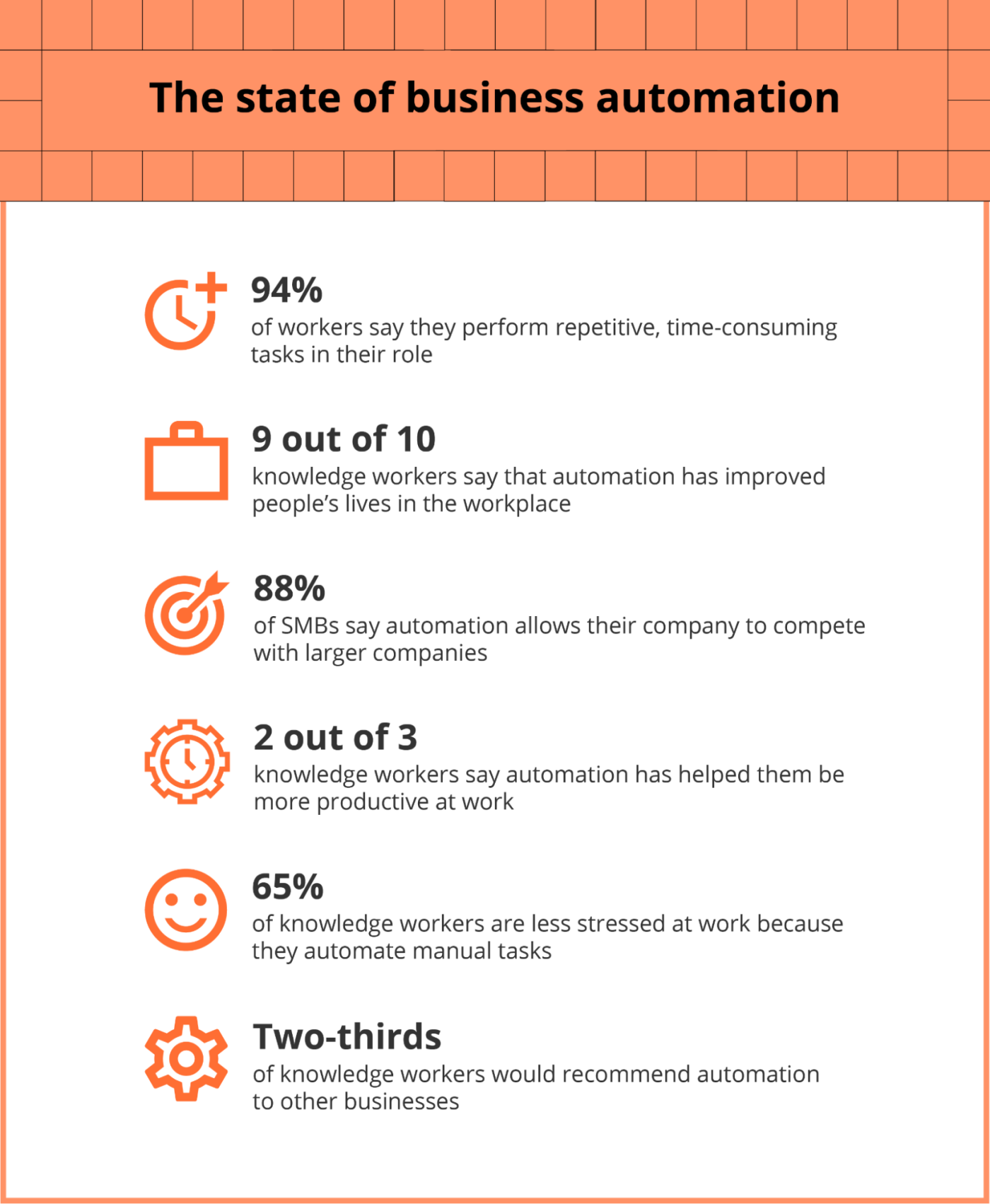 Automation is essential software for small and medium-sized businesses 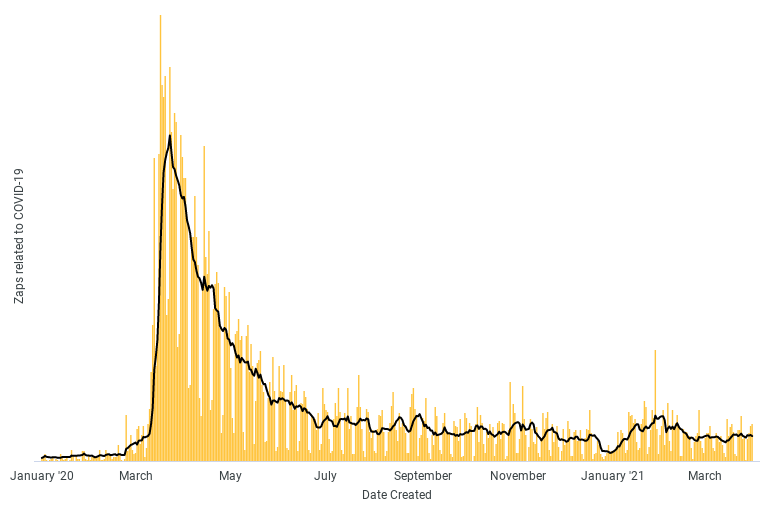 And it made a difference. 63% of SMBs say automation allowed their company to quickly pivot as a result of the pandemic—whether it was bringing their goods and services online or changing their business model completely. That benefit isn't likely to shrink, either: even as things get back to "normal," we'll live much more of our lives online. Small businesses are already using technology to prepare for that reality: 66% say automation is now essential for running their business.

See how Michael Alexis used automation to pivot his business after losing $2.8 million in revenue at the start of the pandemic.

Why is it essential? SMBs rely on software to perform specific functions, like capturing leads from Facebook Lead Ads. Rather than spend time manually sending data from one place to another, SMBs use automation to connect different software and create scalable systems and processes.

According to Zapier user data, the most common software and business apps SMBs are connecting include everything from email marketing tools to lead capture apps to scheduling software. 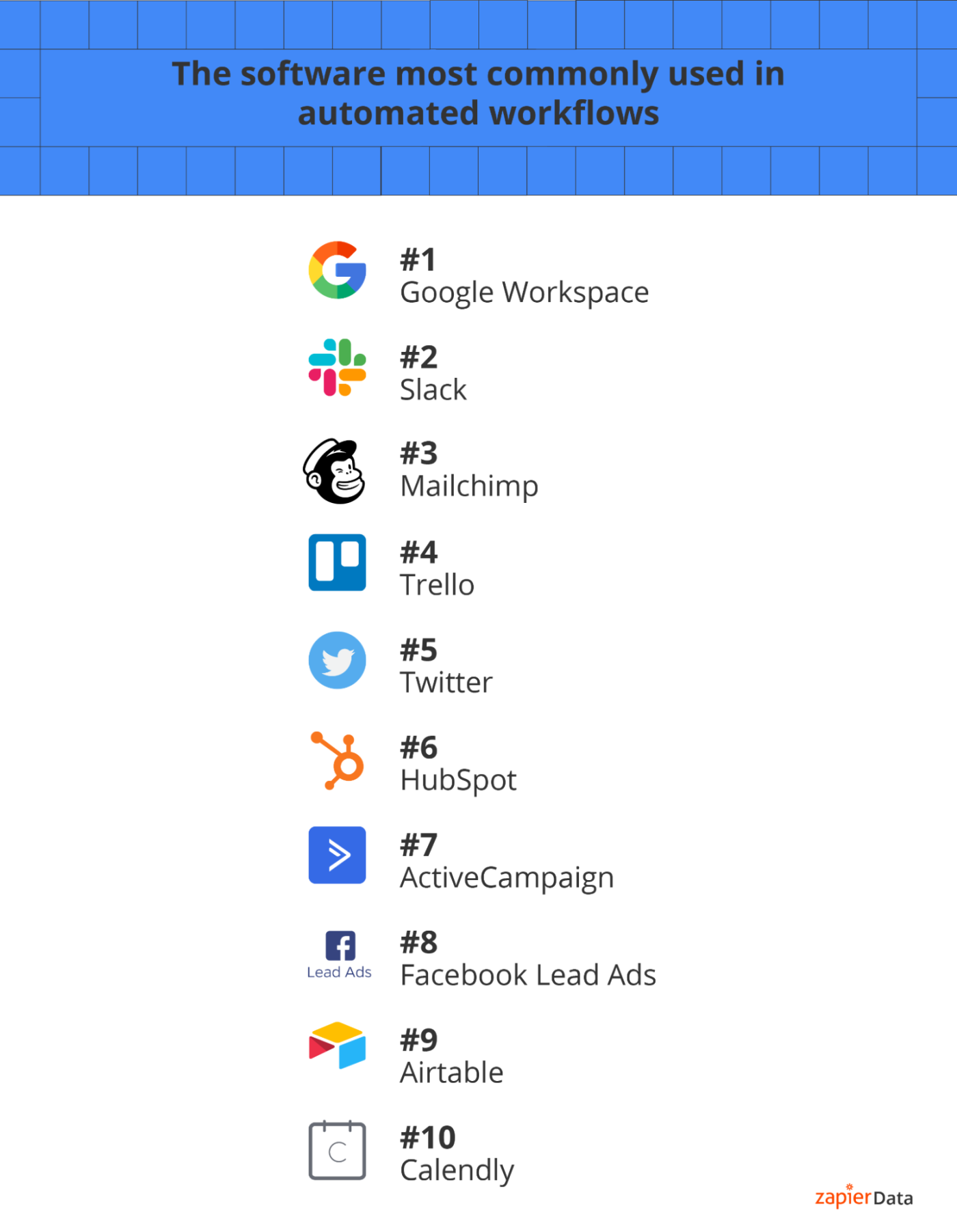 What exactly are SMBs automating? Some of the most common use cases for automated workflows include: 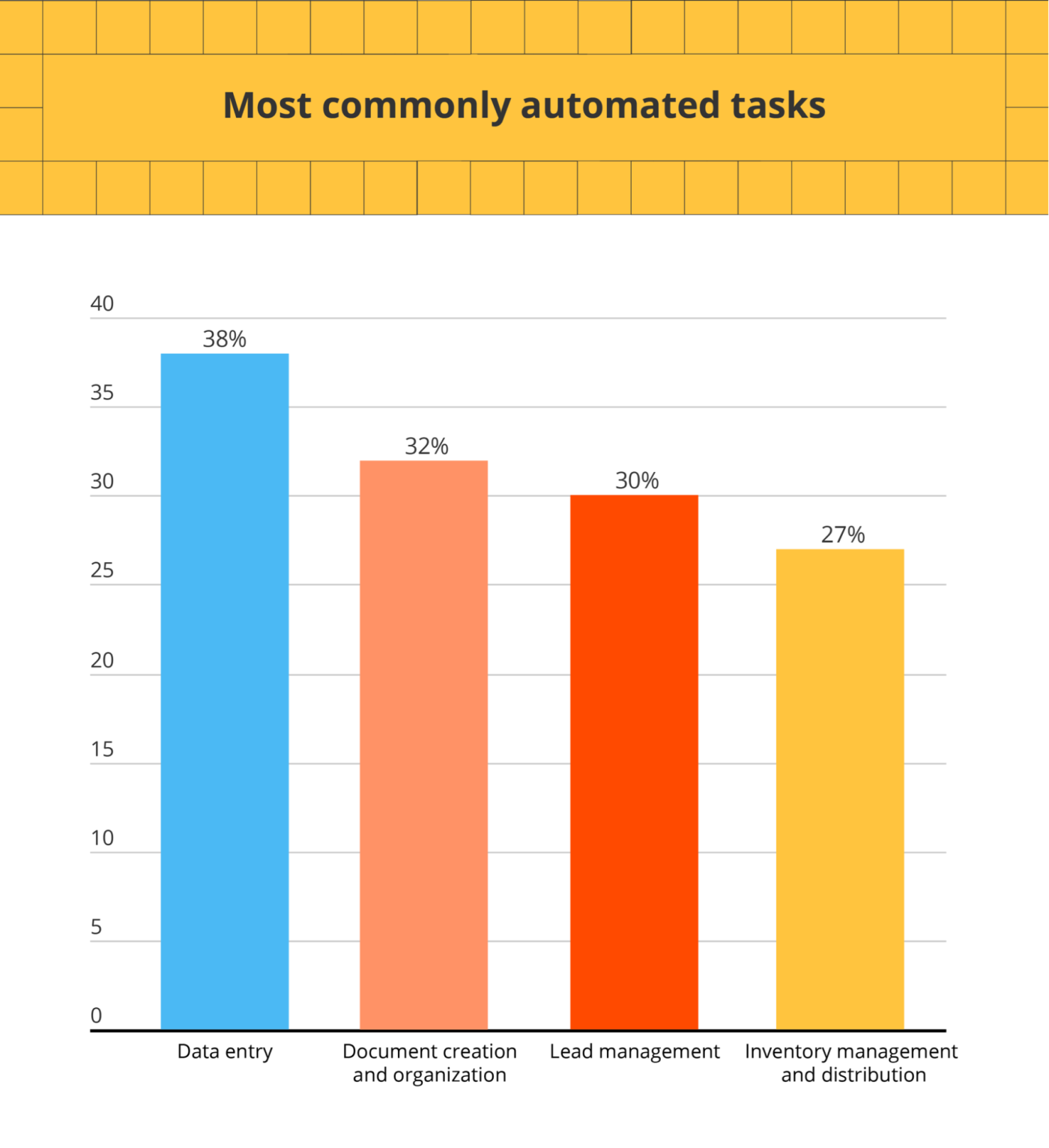 Here are some of the competitive advantages automation gives them: 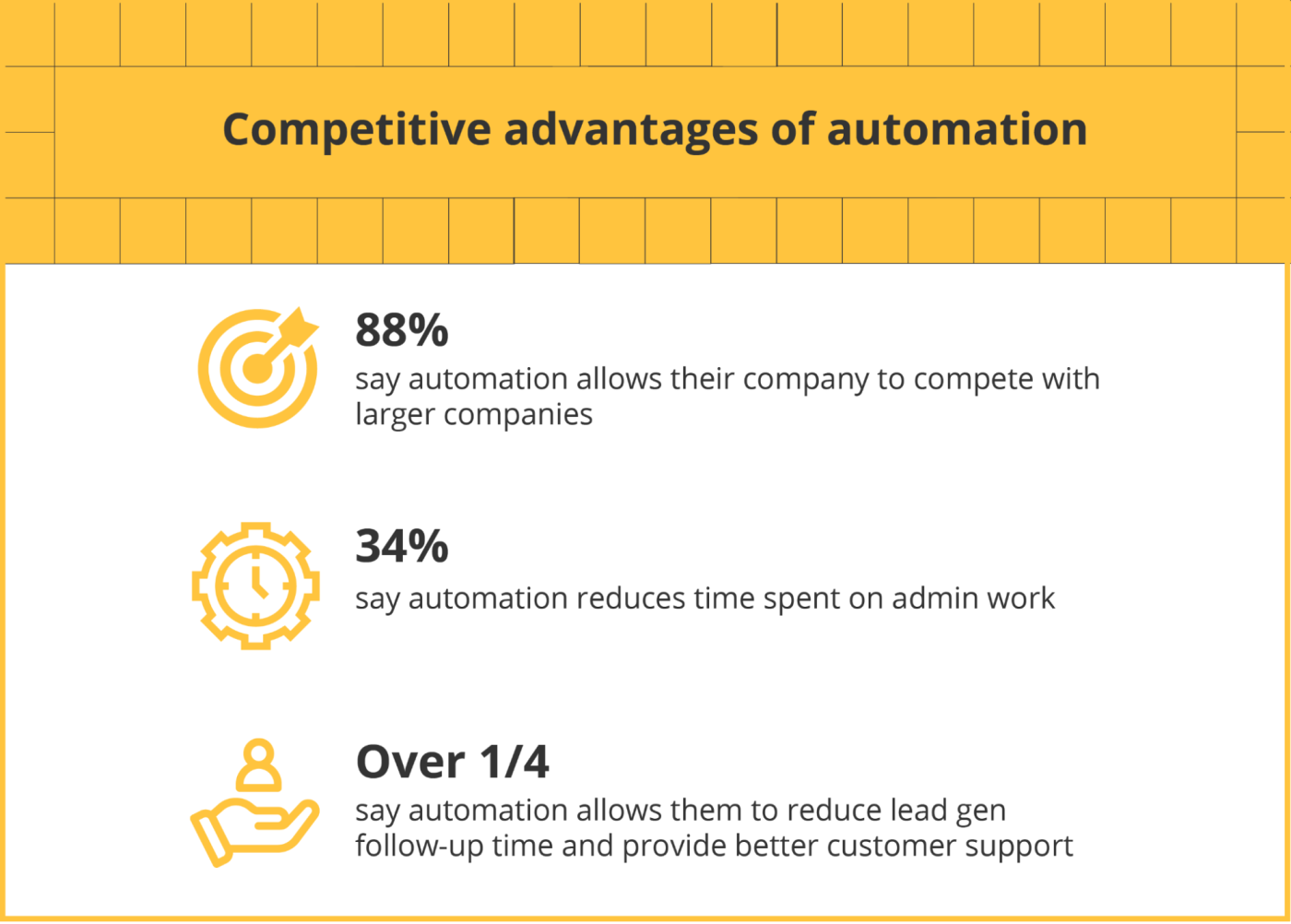 The benefits of automation are often centered around the value it brings to a business. But workers are benefiting just as much. Automation tackles mundane tasks and allows people to concentrate on the kind of work that drives them.

Currently, 44% of SMB employees say that they're not highly efficient or productive in their day-to-day work, and 94% say they perform repetitive, time-consuming tasks in their role.

Some of the most time-consuming tasks for small business employees are:

By identifying repetitive tasks that take the most time, SMBs can develop a strategy to automate manual and repetitive processes and free up time for more creative or strategic tasks. In fact, nearly 70% of SMB employees say using automation software has helped them be more productive at work. And it's not just about productivity: 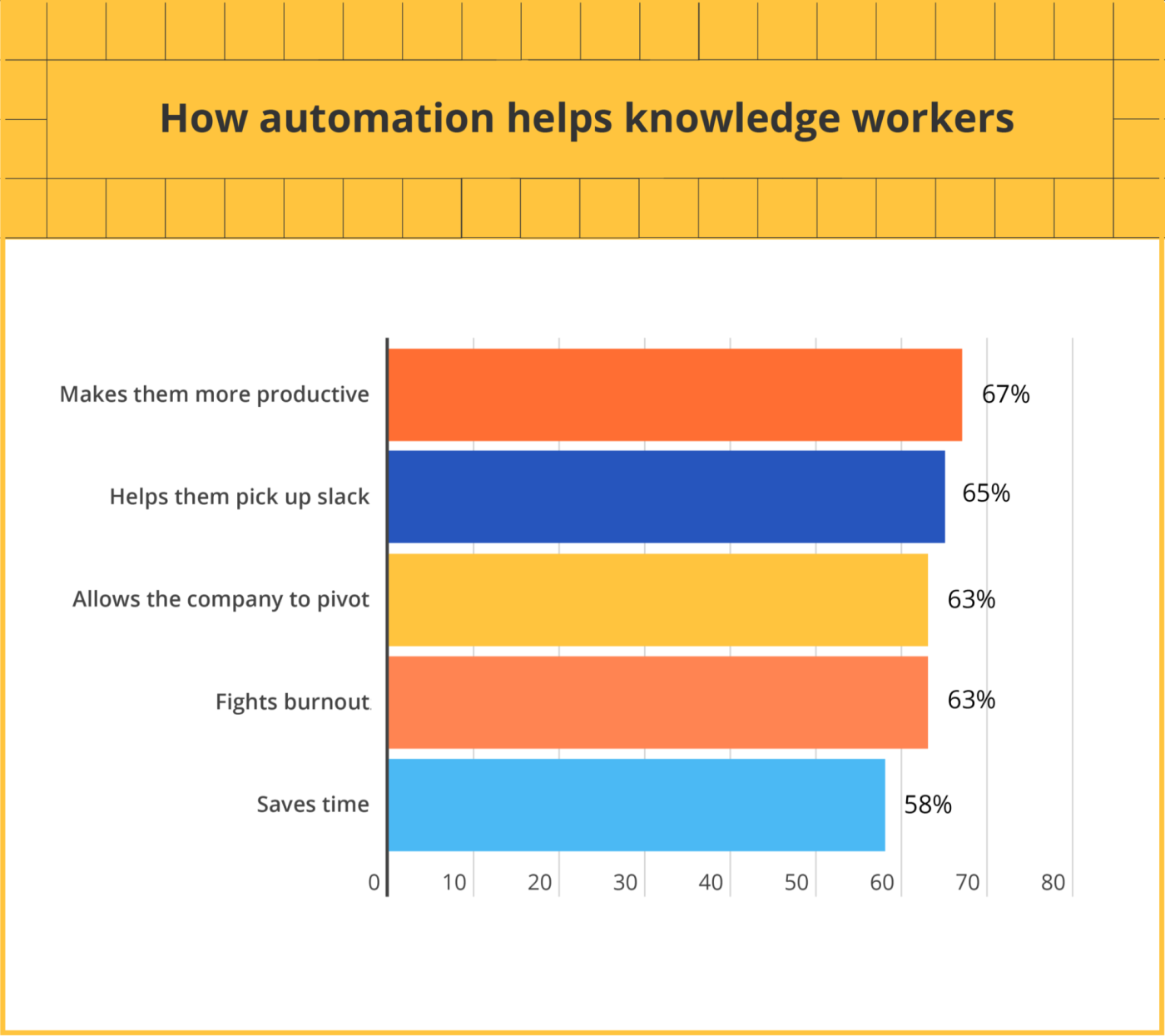 All this adds up: 92% of knowledge workers agree that automation has improved their lives in the workplace. Specifically:

How much do knowledge workers value automation? 52% would rather sit in traffic for two extra hours every day than give up the automation tools that make their life easier.

For many small and medium-sized businesses, the future of automation is already here. Many SMBs are using automation to increase worker productivity and happiness, create efficient and scalable systems, and compete with larger businesses. A robot revolution isn't coming anytime soon, but automation is creating a more productive workforce.

Zapier surveyed 2,000 U.S. knowledge workers from small and medium businesses [fewer than 250 total employees] on whether or not workflow automation tools are being used at their company. This survey was completed online in March 2021 and responses were random, voluntary, and completely anonymous.