Reddit marketing: How to get it right (and wrong)

Learn how to advertise on Reddit—and if you should do it at all.

Reddit can be a gold mine for brands, but it can also be absolutely brutal if you dive in without learning the ropes.

As a content strategist and digital marketer, I've spent the last 10 years figuring out what works—and what doesn't—in online marketing. I've also learned that Reddit isn't your average social network. Redditors are ruthless about marketing. Facebook and Instagram will deny your ad if it doesn't meet their requirements. But Redditors? They'll create an entire subreddit just to drag your company in the comments.

But marketing or advertising on Reddit can still be well worth it.

Reddit has a massive audience (we're talking hundreds of millions of visits a month). But size isn't everything, so here are the other reasons you should be open to advertising on Reddit:

So that's why it's worth marketing on Reddit—but does it mean you should definitely do it? Let's look at your options. Like with most social media platforms, there are two ways to market on Reddit: organic and paid.

The organic side of things looks a lot different on Reddit than it does on other social networks: you can't just create a business account and post content that shows up in users' feeds organically. Instead, you find topic-specific communities (AKA subreddits) and engage with them. No matter what industry or niche you're in, there's a good chance there's a subreddit (or two…hundred) on a related topic.

Here are a few ways you market organically on Reddit:

These can all be effective strategies, but it's always possible you may get called out for trying to market—so tread lightly.

There are two main types of paid ads on Reddit:

1. Takeover ads. There are several takeover ad packages, allowing you to take over specific subreddits, the entire site, categories, and so on. Most packages include a promoted post, top banner, and an ad in Reddit's "trending" category. 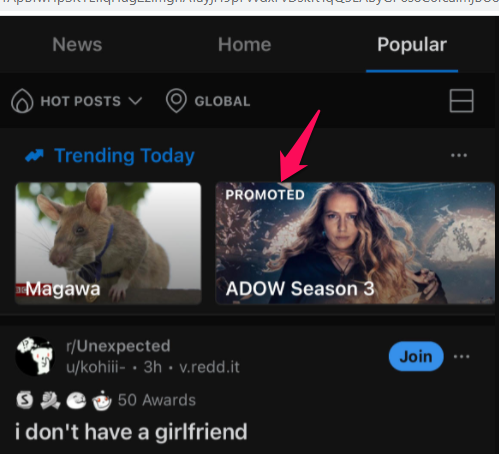 2. Promoted posts. These are more like standard promoted posts on social media: they show up alongside regular posts with a "Promoted" tag. Businesses can choose to leave the comments on or turn them off. Leaving the comments on allows for discussion, which can be good and is the whole point of Reddit, but make sure to monitor them carefully. 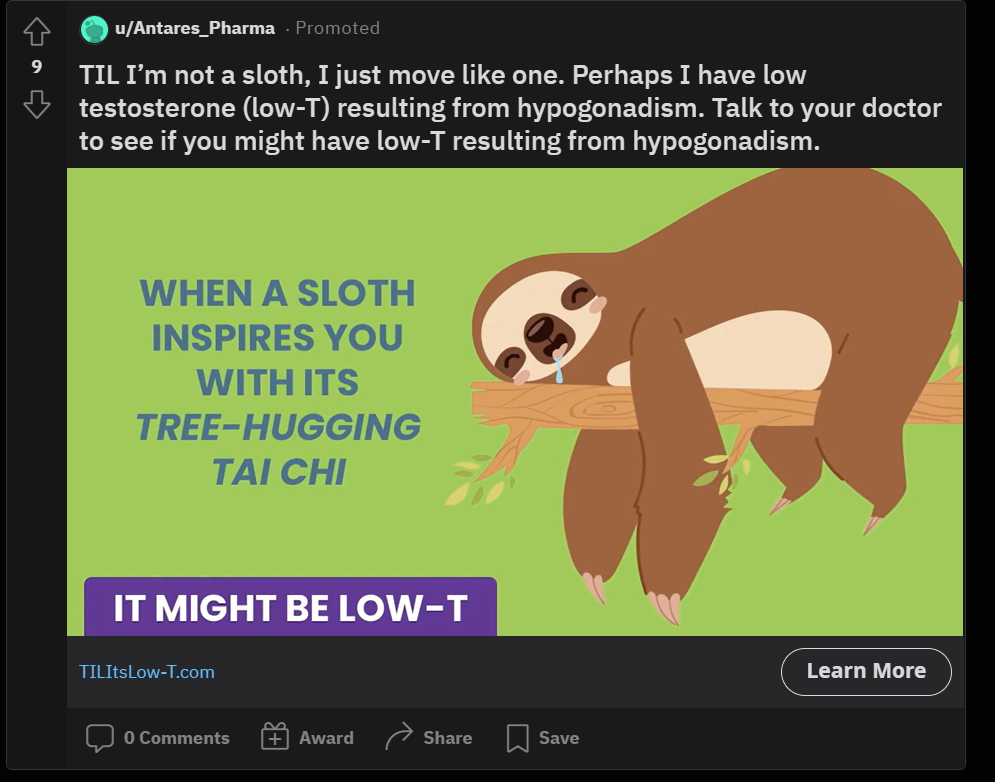 Reddit offers fewer targeting options than other paid social platforms, like Facebook. On Reddit, you can target based on location, interests, subreddit, device (mobile vs. desktop), and the time of day, but you can't target by demographics like income or connections. (You can target custom audiences, though.)

But Reddit allows you to choose the goal of your ad. When creating a Reddit ad, the platform will prompt you to select an objective.

Each objective offers different ad types and specific payment and bidding structures. For example, if you choose the traffic objective, you'll pay for each click and can choose from link, video, or gallery ads.

Reddit's ad algorithm uses these objectives to optimize your ads to reach the right audience at the right time based on past Reddit behavior.

Redditors are open to learning about new products and services—that's part of the reason they're on the platform. Here's how to take advantage of that without it backfiring.

You will be called out if you get your organic marketing wrong—and it will be abundantly clear you're marketing if you don't know Reddit well before doing it.

The creators of a hair towel appear to have been attempting to market their product "organically" by posting as a user in a r/curlyhair, where people share products and techniques for curly hair. They got called out for it really quickly. 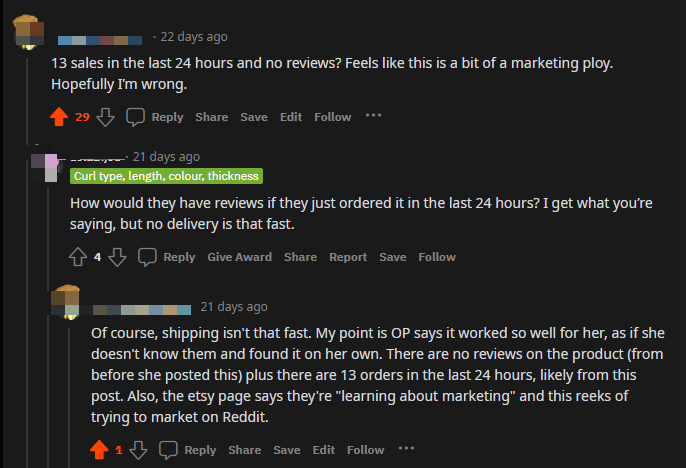 Get to know your community. Hang out in subreddits they frequent. And take the time to read the subreddit rules (some don't allow marketing at all).

You'll also want to learn the acronyms your audience uses. Here are some basic ones used in most subreddits:

There are also more specific acronyms for different subreddits; most subreddits have a sidebar containing that info.

2. Engage on the subreddits your audience frequents

No matter what industry you're in, there's a subreddit dedicated to a topic in your field. Run a particle physics startup? There's a subreddit for that. Looking for folks who are into reading, computers, AI, Airbnb, futurology, or financial independence? You got it.

Start by searching for key terms in your industry. For example, if I wanted to create a Reddit strategy for Zapier, I might start by searching "marketing automation." You can then see posts and communities related to that term as well as people who post about the topic regularly. 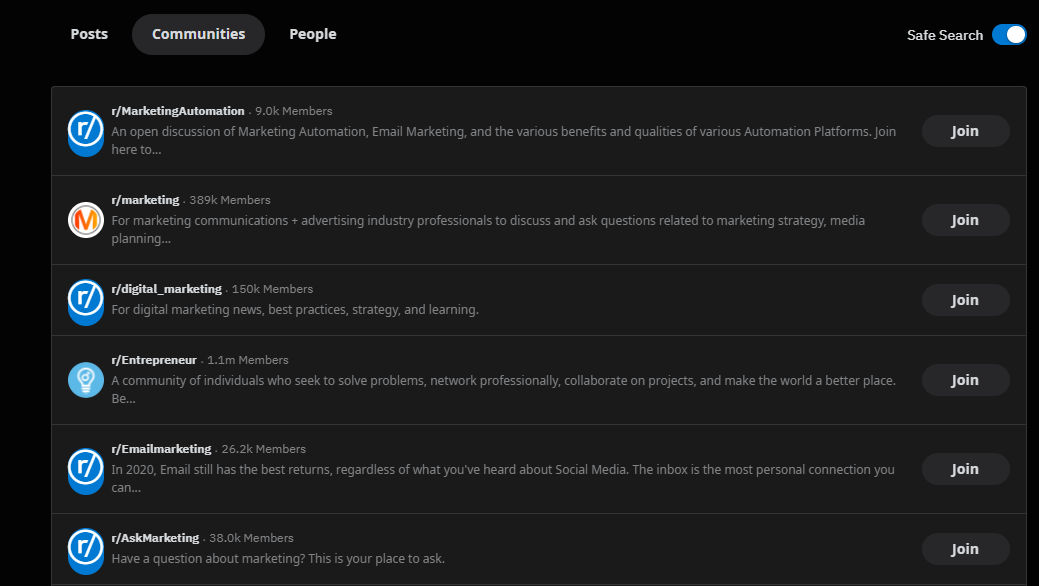 Consider searching for your brand name, too. You never know: people might already be talking about you. You can even use Zapier to set up an automation that alerts you whenever someone mentions you on Reddit.

3. Be a little different

Reddit isn't your average social media app. Most users are anonymous and engage in groups based on interest, not location or friends. That provides businesses with more freedom to think outside the box. That can mean a few things.

You could be self-deprecating and meta, like this Samsung ad: 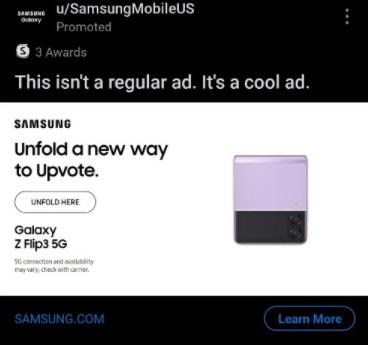 Or you could use popular emoji, memes, or GIFs, like nutrition brand Huel does here: 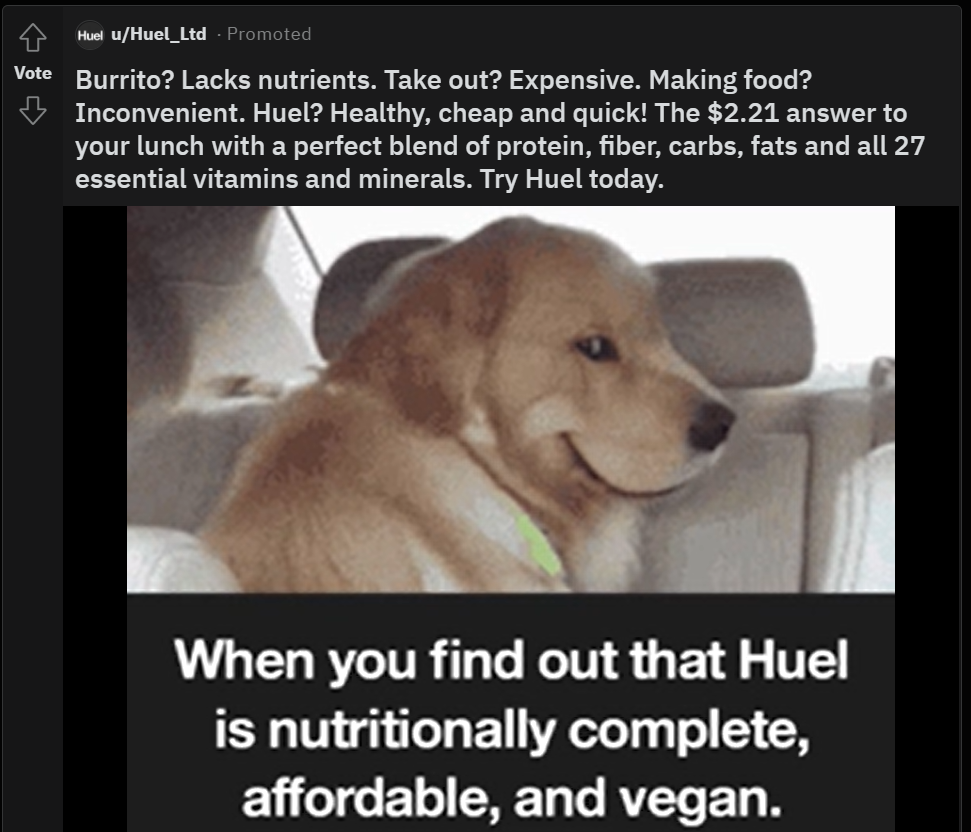 Use casual language, and don't be afraid to be a little less professional. Share your failures, funny interactions, or anything that might make people chuckle.

Redditors may not like your attempts at marketing on Reddit—if they don't, you'll know.

Example: Picsart, a photo and video editing tool, tried to do an AMA. It started innocently enough with the founders offering to answer any questions.

Then users started complaining about ads on the platform.

The Picsart team essentially used marketing copy to respond to comments about the price. Which, predictably, also didn't go well.

I guess you could argue this AMA wasn't a failure in the end: because it entered Reddit lore as one of the worst AMAs of all time, many people are now familiar with the Picsart brand.

In general, paid ads don't get as much backlash, as long as they don't use memes incorrectly or make outrageous claims. Regardless: there's a chance your first marketing attempt on Reddit won't go smoothly. Instead of getting defensive or crawling into an internet hole of shame, listen to that feedback and improve the next one.

When it comes to marketing on Reddit, start small. If you're totally new to the platform, create an account and start following subreddits in your industry, so you can learn where your audience hangs out. I'd also strongly recommend starting with paid ads—you're less likely to rile up marketing-adverse Redditors that way. And please don't dive into using memes and GIFs until you understand what they mean and how users will react.

Most of all, don't take yourself (or your brand) too seriously on Reddit.

Danielle Antosz is an Ohio-based content marketing and SEO specialist. She has more than a decade of experience writing and developing strategy for B2B, tech, and SaaS companies. You can stalk her on Twitter @dantosz.