As it turns out, I couldn't find much to support that claim. In fact, I found one study that showed multitasking actually makes people more productive.

What I did find, though, was that even if multitasking were to impact your productivity, it would be the least detrimental of its side effects. The true costs of multitasking are to your mental health, happiness, focus, and ability to learn new things. So the real reason you shouldn't multitask isn't that you want to get more done. It's because you're looking after your well-being.

We often think of multitasking as doing more than one thing concurrently: Watching YouTube videos while chatting with friends on Discord (one of my teenage daughter's favorite activities), or driving while talking on the phone.

Multitasking is both doing multiple things at once (like driving and talking on the phone) and alternating between different tasks instead of finishing one and moving on to another (like responding to emails incrementally while working on a larger project). At least, that's the expanded definition that cognitive neuroscientist Paul W. Burgess offers.

When you define multitasking in that way, it describes an office worker's average day at work.

We're all splitting our time between larger, higher priority tasks and consistent interruptions from lower-priority, less time-consuming to-dos that arrive via email, text, instant message, and face-to-face interruptions. And if you allow all of these interruptions to pull your attention to different tasks throughout the day, you're essentially spending the entire day multitasking.

The time it takes to stop doing one task and focus on another is best measured in milliseconds.

That's what several researchers found while studying the impact of task switching. They tested a variety of different types of task-switching activities and found that it rarely takes longer than two seconds to perform the mental control processes that are required to switch from one task to another.

But that seems to conflict with the statistic I've seen cited frequently that says it takes 23 minutes to refocus after an interruption.

That's because the 23-minute statistic is often cited incorrectly.

It comes from a research study conducted by Gloria Mark, Daniela Gudith, and Ulrich Klocke. In their study, 48 participants had one main task to focus on, but they were also directed to deal with other tasks as they came in (i.e., interruptions via email).

When interrupted, an average of 23 minutes and 15 seconds passed between the moment of interruption and the point where participants resumed working on the main task. So the 23 minutes isn't the amount of time it takes to refocus after switching tasks; it includes the time it takes to complete the task that interrupted you.

And though a 23-minute pause due to an interruption isn't an insignificant amount of time, the researchers discovered something interesting. The people who were interrupted managed to complete their main tasks in less time than people who weren't interrupted—and with no measurable difference in quality.

"Surprisingly, our results show that interrupted work is performed faster," the researchers write. "We offer an interpretation. When people are constantly interrupted, they develop a mode of working faster to compensate for the time they know they will lose by being interrupted."

How Multitasking Affects Your Mental Health

The findings from the Mark, Gudith, and Klocke study weren't all good news: "Interrupted work may be done faster, but at a price," they write. "After only 20 minutes of interrupted work, people reported significantly higher stress, frustration, workload, effort, and pressure." So it's quite possible that you can multitask all day long with little to no impact on your productivity or the quality of the work you produce. But behind the scenes, all of that multitasking is likely taking its toll on your overall mental health and wellbeing.

Additionally, Gloria Mark conducted a subsequent study that found that even if multitasking your way through interruptions makes you more productive, you're likely to feel as though you weren't productive.

And feeling less productive, Mark found, also takes a toll on your mental health. The second study found that people who felt they'd been productive over the course of the day reported having more positive moods at the end of the day. But the more often people were interrupted by emails, switched tasks on their computer screens, or participated in face-to-face discussions, the more likely they were to report feeling that they hadn't been productive.

The researchers concluded that "though our measure of productivity involved subjective reports, this productivity measure can actually capture many other underlying attributes. We found, for example, that productivity is highly correlated with positive affect. Thus, subjective productivity could be a barometer for happiness in the workplace."

In other words, if you feel you're not being productive, you're probably also less likely to feel happy at work.

How Multitasking Affects Your Ability to Learn New Things

A study from researchers at the University of Oregon found that chronic multitaskers are also less able to fully focus their attention on tasks.

The researchers compared two groups of people—those who regularly multitask and those who don't—and conducted three experiments to see if people who preferred multitasking were better at focusing, had better memories, or were able to switch contexts quicker.

The heavy multitaskers performed worse on every single experiment.

The results suggested that people who prefer monotasking were better able to fully focus on new tasks when taking them up, whereas heavy multitaskers tended to keep tidbits of information in mind for all of the tasks they were working on.

So why is that bad? In an article for Time, the Cleveland Clinic's Dr. Cynthia Kubu explains that by multitasking, "we slowly lose our ability to focus enough to learn. Attention is essential to learning." So regardless of your productivity while multitasking, it's likely that you're not growing in your skills.

Various studies have shown that technology plays a big role in both our tendency to multitask and our elevated stress levels.

This 2012 study found that people were less likely to multitask and experienced less stress when they didn't have access to email. Another study three years later measured the stress levels of people who had unlimited access to their emails one week against their stress levels another week where they were only allowed to check their email three times a day. "During the limited email use week, participants experienced significantly lower daily stress than during the unlimited email use week," researchers found. Then, in 2017, researchers looked at the impact of push notifications. With push notifications disabled, participants were much more likely to report that they felt less distracted and more productive. Additionally, 11 of the 30 participants reported they felt less stressed with push notifications disabled.

Another study led by Gloria Mark even found that technology's frequent interruptions train us to self-interrupt. Occasionally, when checking emails or notifications, we find something exciting. That trains us to want to check in on email and messages even when those things aren't actively interrupting us. Eventually, instead of technology causing the interruptions, we begin to interrupt ourselves to check in.

And once we're stuck in this cycle of self-interrupting, it stresses us out to not check in. This point comes from research conducted at Duke University's Center for Advanced Hindsight. Researchers found that people get an average of 65-80 notifications on their phones every day. When participants had access to check those notifications as often as they wanted, they felt "stressed, unhappy, interrupted, and non-productive."

On the flip side, when participants were asked to turn their notifications off completely, that also caused stress. People reported feeling anxious and worried that they were missing something important.

What did seem to work well, the researchers found, was delivering notifications in three batches over the course of the day. This prevents the stress of constant interruptions while also minimizing the anxiety caused by the fear of missing something.

Tools to Help You Monotask

As an extension of this research, developers at the Center for Advanced Hindsight are working on an app, Daywise, that makes it easy to do what they recommend. It delivers notifications in batches at times you specify and can even be set up to allow certain notifications (like those from your boss or your child's school) to bypass batching.

Unfortunately, Daywise is still in beta, and it's only currently available for Android devices. But if you like the philosophy behind Daywise, there are other apps you can use and settings changes you can make to do the same thing.

One option for email is Boomerang (from $4.99/month), an extension for Gmail and Outlook that lets you set up a delivery schedule for when emails are delivered to your inbox. 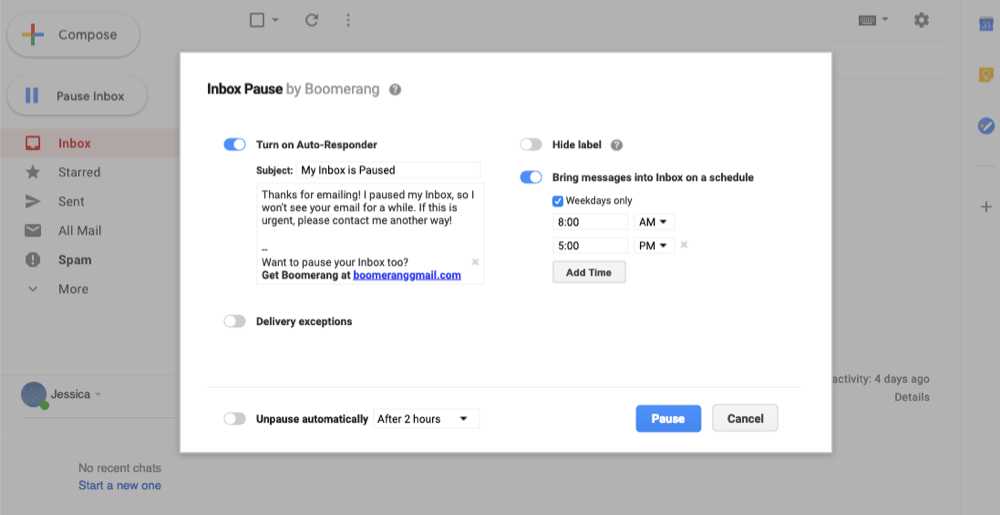 Like Daywise, Boomerang also lets you create rules that allow specific emails to bypass your batching rules so you don't miss anything important.

If you work on a Mac, you can hide your menu bar or turn on Do Not Disturb to keep notification counts from distracting you or mute notifications altogether. On Windows, use Quiet hours. And both iPhones and Androids offer do-not-disturb features that block notifications while allowing you to set up bypass rules for important calls and text. You can even set up do not disturb on a schedule to get the same batching features Daywise offers.

And if you're really struggling with ignoring your notifications, there are a couple more aggressive options. Flipd (free for iOS and Android) lets you lock your phone screen for a set amount of time. While it's locked, it prevents you from using any other apps. 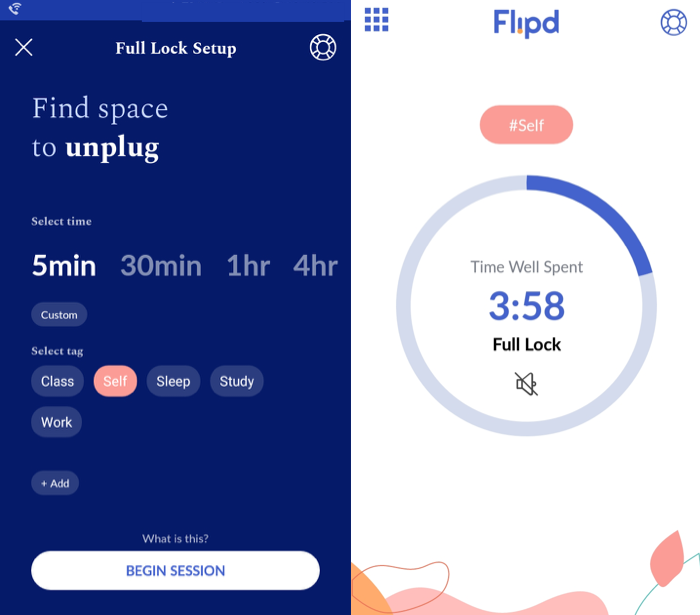 If you think blocking access to your phone will just encourage you to use your computer to check in on your notifications, you can use the nuclear option in StayFocusd (free on Chrome) to completely block specific websites—or all websites—for a set amount of time.

If none of these options seem right for you, there are plenty of others to consider. Check out our list of the 10 best apps for focusing and blocking distractions.

Sometimes multitasking is inevitable. You have to cook dinner while also keeping an eye on your toddler. You need to respond to an email from a client while working on a different project. The list goes on.

But a lot of the ways we multitask are self-imposed. We feel like we're going to miss out if we don't check in on our social media notifications, texts, or emails. We feel like people will be disappointed or frustrated if we don't reply to their messages immediately. What I've found is that very few of my notifications are important, and people will get used to waiting on a reply.

If you can build better habits and limit the number of times you allow yourself to get distracted while you're trying to focus, at the very least you'll feel more productive. That, in turn, will make you feel happier. You'll also be able to focus on tasks more intently, which will make it easier for you to learn new things.

And best of all, you'll be less stressed.