Before posting updates to Twitter, a Zap will first check that the same post hasn't been made by any Zaps under the same Zapier user's account. The error message means that the same status was posted by either the same Zap or another Zap. Twitter has strict policies on automation and the use of multiple accounts as detailed in this post

A Zap that auto-responds to search mentions is a violation of Twitter's policies for automation.

Twitter’s policy doesn’t allow replies or mentions in response to search mentions. If your Zap has a Search Mention trigger and an action that sends a Tweet to that user’s @username, the Tweet will be posted but the @ will be removed.

The User Tweet, Favorited Tweet, and New Follower triggers will all ask for a 'Username' when setting up that trigger. You can specify the username with the preceding "@" or not. Both formats (e.g. '@zapier' or 'zapier') will work correctly.

If you do not want retweets to be included as part of your twitter Zap, you can add the following filter to exclude them from search: 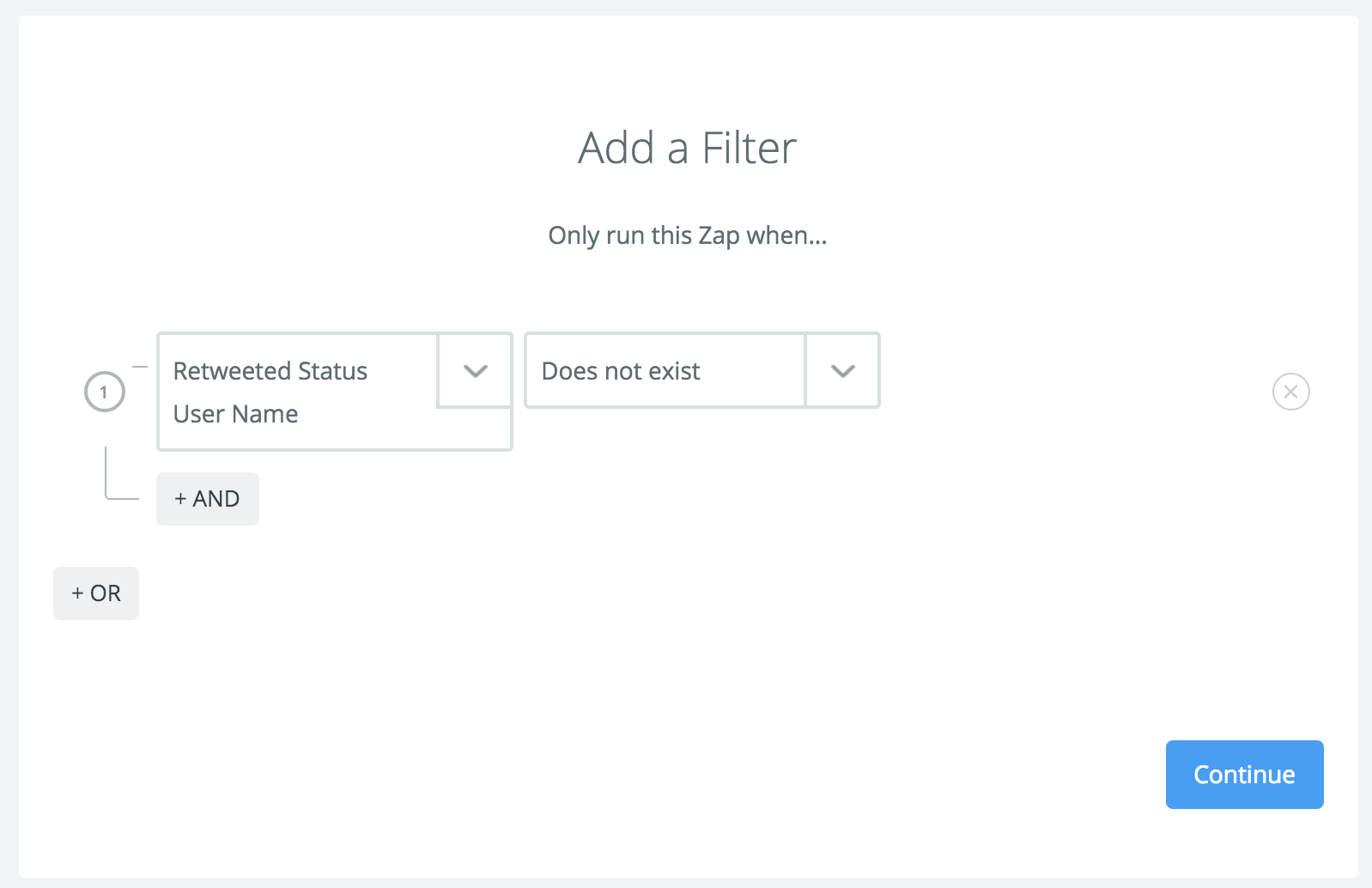 You can read more about adding custom filters to your Zap here.

This error occurs when a URL isn't a direct URL of an image/does not have an image file extension is sent to be the 'Image URL' for a Tweet. Make sure what you're passing into the Image field is a file object or a publicly accessible URL of an image.

The Twitter Search Mention trigger doesn't work exactly like the native search within Twitter. You can get more info on how the search function works from Twitter here. If you want to modify the way the search works, you can use the Query Operators outlined in this link to limit the results.

Twitter counts each link and photo as 24 characters, leaving only 116 characters for your status. For example, if you have an image tweet with no links, you'll need to shorten the tweet content to be 116 characters or less in order for Twitter to accept it.

This characters_reserved_per_media number changes occasionally, but you can always check https://dev.twitter.com/rest/reference/get/help/configuration to see the current character number reserved for each link/image.

This error indicates an issue with how many users you're trying to add to a list in a short span of time. Twitter reports that posting and update limits are adaptive and may vary at times of high traffic, or if the system suspects that something suspicious is going on, so we can't give a definitive answer as to how many additions in 15 minutes (15 minutes is the standard rate limit window for most operations on the Twitter API) will cause you to see this error. What we typically recommend is adding a filter step to your Zap, if possible, to make the criteria for adding a user to the list more selective.

There are two possible reasons why this might happen:

What types of files are supported when creating a Video/GIF tweet?

Videos and GIFs must be less than or equal to 15MB. Supported formats commonly used include .mp4 and .mov for videos and .gif for GIFs.

Note: Twitter may not accept media in a supported format if it does not meet the required specifications. You can learn more about the specifications and recommendations in Twitter's Media Best Practices documentation.