If you read an earlier post on the Zapier blog about staying productive without using to-do apps, you will have already seen a glimpse of the productive potential of plain text files. I came across some other clever uses of plain text files recently, so I wanted to pull them all together so you can pick and choose which ones will be most useful to you.

A "Write Every day" File 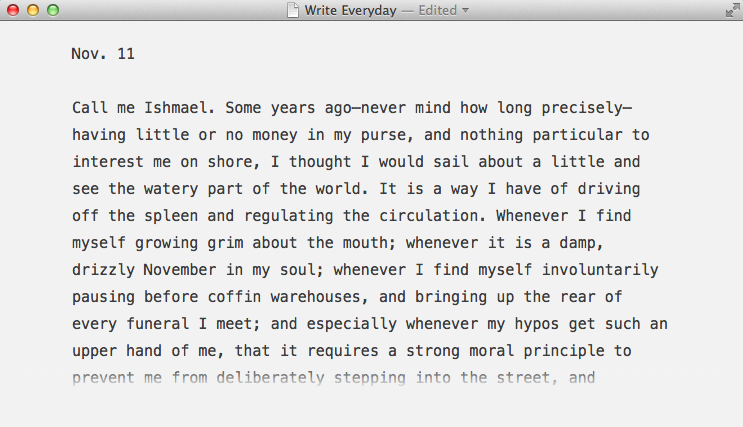 I came across a comment somewhere in my wanderings around the internet that suggested this clever use of plain text files. The commenter had a single text file saved to their desktop in which they wrote something every day. The idea was to cultivate a daily writing habit, which many people do—often using separate text files per day, a journalling app, or a purpose-made app like 750 Words.

Using a single text file instead means all of your writing is together in one place, and it's not stored online—it's private and local. Plus, it's easy to get started with: just open up the file each morning, type out the date and get writing. Later you can go back over your file to see what you wrote and how much you wrote per day.

Of course, you could create a plain text to do list any way you like, but if you want some extra bells and whistles, try Todo.txt by Gina Trapani, founder of Lifehacker and co-founder of ThinkUp. You can use Todo.txt's syntax in the Android and iOS apps, from the command line, or in any text editor. For some text editors, you can get plugins to add things like syntax highlighting.

There's something to be said for seeing how much you've gotten done at the end of the day. You know how satisfying it is to cross out items on your to do list, and then look back at the list to see everything you completed? A "done" list, or "anti-todo list" as Marc Andreessen calls it, works in a similar fashion: you simply take note of each thing you get done during the day.

Start out with the date and just list your "done" items underneath. Not only will this help you review your productivity at the end of each day and make you feel better about what you got done, but it can be really useful to keep around as a work log. You might want to look back in weeks or months to come to see what you were working on or how long a project took to complete. 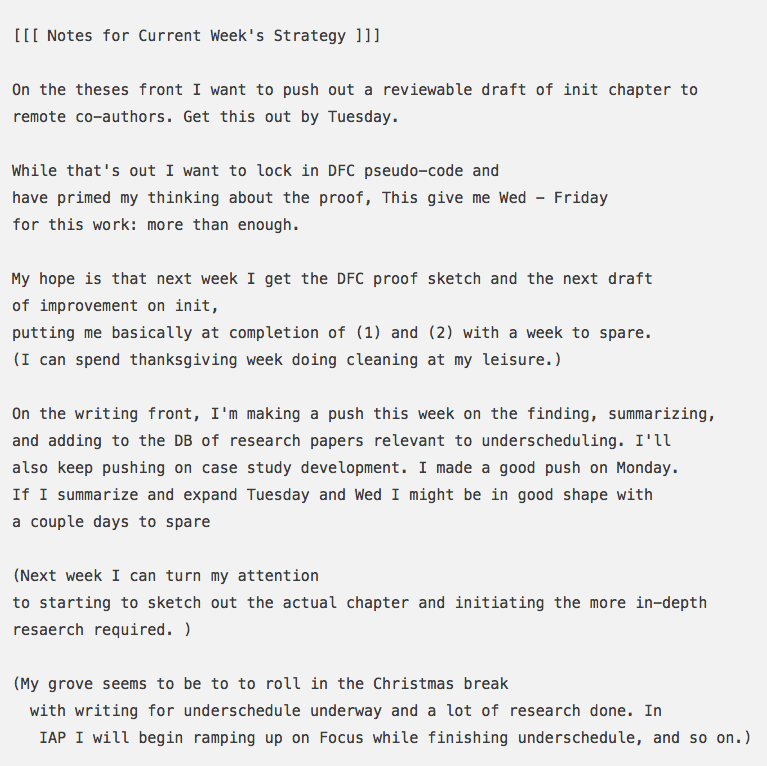 Computer scientist Cal Newport uses a text file to plan his week (example above) so he can get more done. Even if you use a complicated task management app, you might still benefit from doing a simple weekly plan like this. I do both, as I need a robust system to keep track of everything, but a simple to do list for the week keeps me from getting overwhelmed.

Cal doesn't have any rules for his plan:

Once a week, usually on Mondays, I open a small text file named plan.txt and jot down my action plan for the week.

There are no hard rules for this plan. Some weeks it's a few sentences. Usually, it's a few paragraphs. Sometimes it spans multiple pages.

The great thing about using a text file for your weekly plan is that you have the flexibility to experiment. You don't need to fit in with any particular feature set—just try out different ways of planning your week and stick with what works.

There are some great apps for journalling now, but if you don't want to pay for yet another app just to hold your journal, a text file can work just as well. You won't get the extras of an app made for journalling, such as automatic weather data, tags, or adding images, but if your aim is to build the simple habit of penning some thoughts every day, plain text will more than suit your needs.

A related idea is writing letters for your children to read when they grow up. I came across this idea on Hacker News, where a parent mentioned writing emails to their son every day. If you'd rather store all that data yourself and not have it filling up an email account, you could use a text file to keep a running list of short letters to your children about their progress.

I recently wrote about how to come up with better ideas. If you're thinking up new ideas all the time, you're going to want somewhere to put them. A simple text file can be a flexible way of storing your ideas—you can add a date if you want to, and you can come back to the list and add notes later to expand on it.

With all the technology available now to help us track pretty much every aspect of our lives, you might wonder why anyone would opt for a text file instead. The answer is the same as it would be for any of the other ideas listed here—text files are flexible, simple, and future-proof. If you note down your exercise, measurements, habit progress, or other metrics in a text file, you won't need to worry about whether your favorite service will keep your data safe, or how they want to structure it.

Of course, you also give up the option of connecting your data to other services via integrations and APIs, but if that's not important for you, plain text will work.

When you're in the early stages of building a new product, a really simple way to keep track of feature requests is to just make a list in a plain text file. Save it to your desktop, and each time a user mentions a feature they want, add it to the list.

To keep track of which features are more popular, add a number beside each feature and increment it as you get more requests. It's so simple, quick, and easy, and in the early stages of building something new, that's often all you need. (I actually stole this idea from someone else but can't work out who it was—let me know if it was you!)

Tasks as Folders on Desktop

Another option is to use one folder per task. If you have a short list but you want to be able to see each and every task with just a glance at your desktop, create a new folder each time you add a task to your list. Developer Zac Holman of GitHub uses a simple script to do this from his command line, but you could just as easily do it manually. In fact, creating a folder manually for each task might even help you prioritize your task list, by making you rethink whether it deserves a spot on your desktop in the first place.

One Thing To Do Today

If you really need help getting more done, you might need to go for this extreme productivity method: create a very simple text file to save on your desktop that includes just one task to get done today.

The idea comes from John Henry Müller, who created this daily text file: 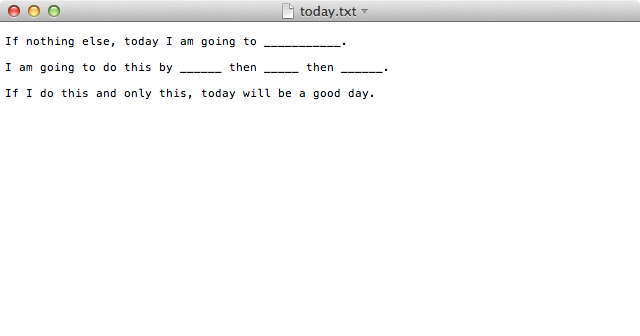 Müller keeps this file on his desktop so he's always being reminded of what he should be working on.

There are some great tools available to make working with plain text easy. Of course, you can use any old text editor—that's the beauty of plain text. But if you want to try something new, here are some good options. 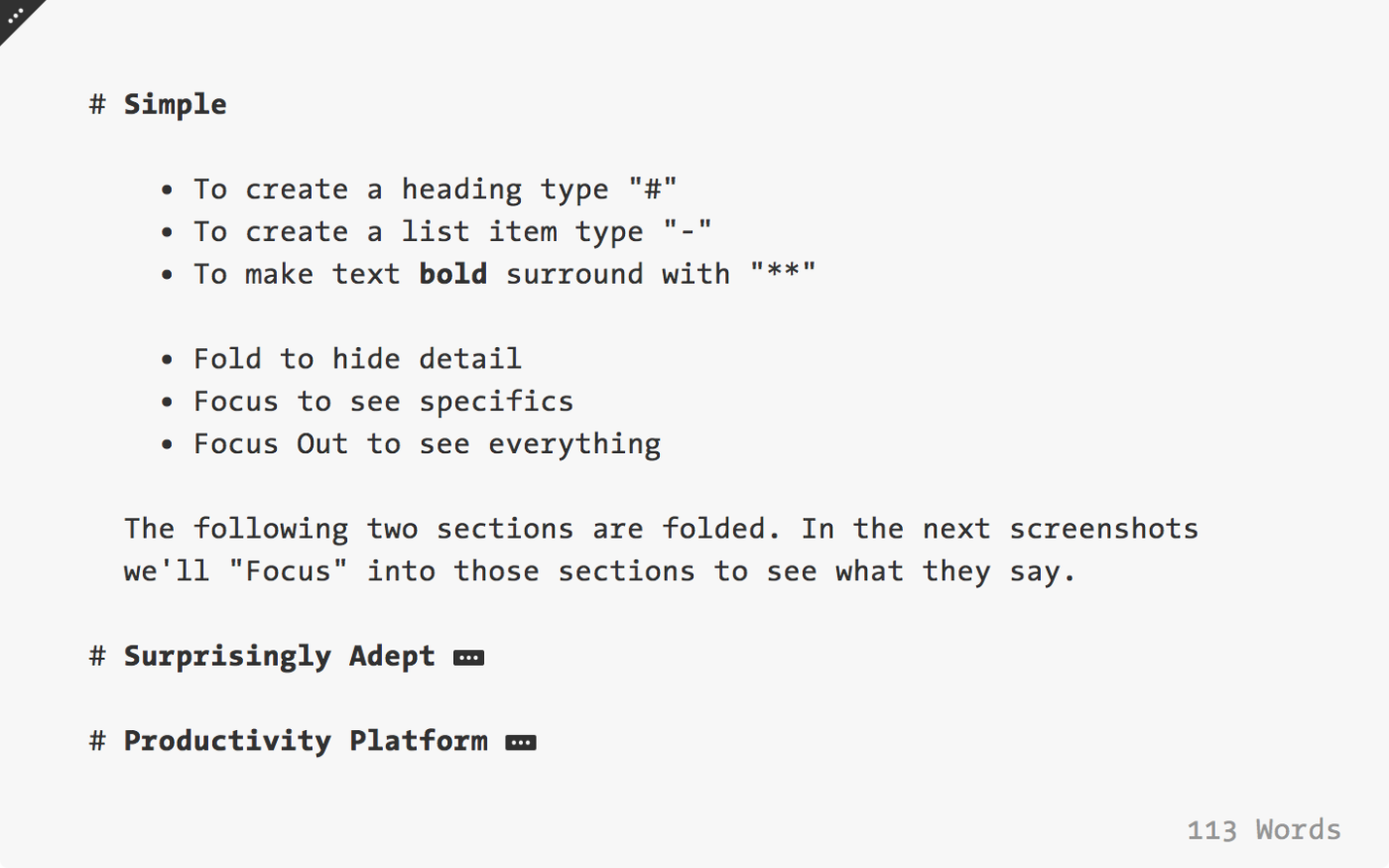 Folding Text is a Mac app that can handle Markdown formatting and includes some unique features like timers and checklists. It's flexible enough to be used for to do lists, outlines, and ordinary writing. 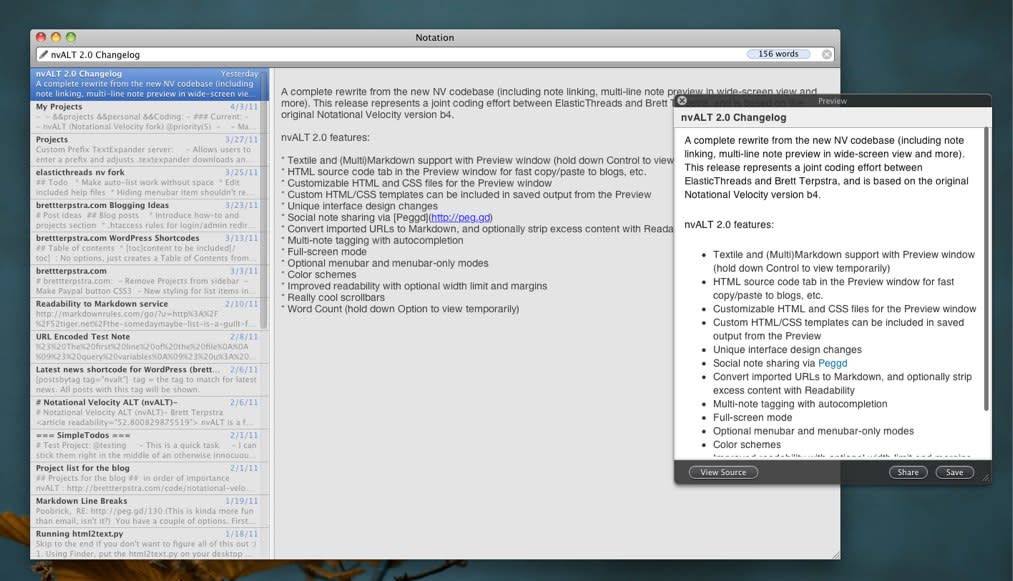 Brett Terpstra's nvALT is a really fast way to make and find notes. If you take lots of notes and often have to search through them to find what you want, nvALT can be a quicker way to organize them than saving everything to your desktop. 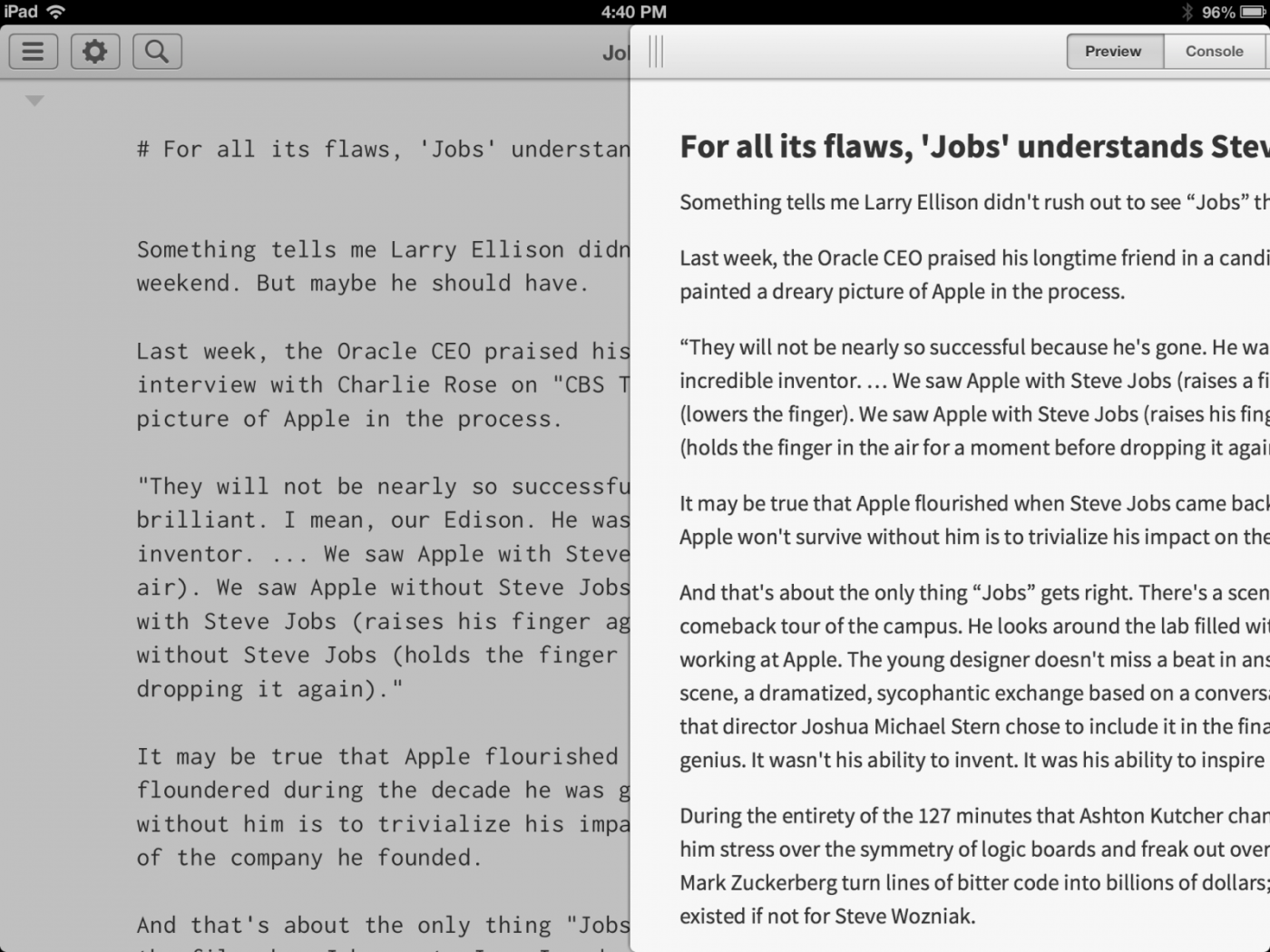 Editorial is a powerful text editor for iOS that lets you write workflows to customize it. It's a great app for simply writing in plain text or Markdown, too, and it can handle .taskpaper files, which is a plain text productivity system previously created by the founder of Folding Text. The TaskPaper app for iOS is no longer available, but if you prefer the TaskPaper syntax over Todo.txt, you can use Editorial to create and edit .taskpaper files. 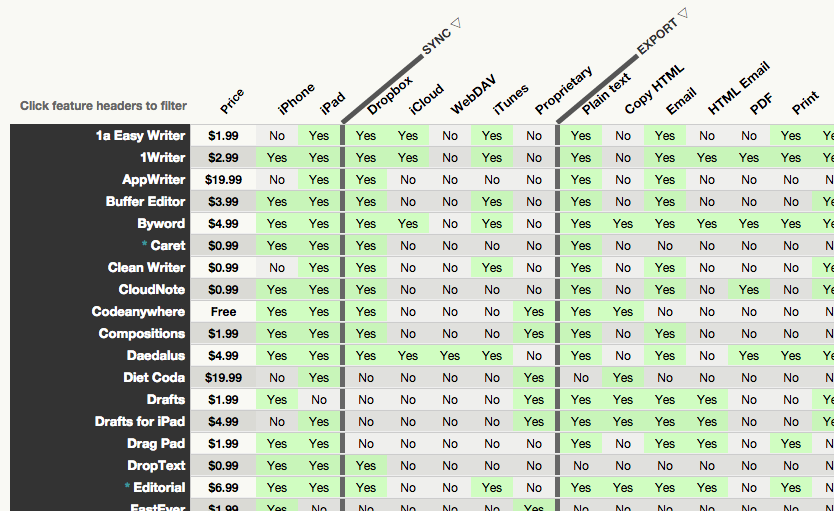 If you're looking for an iOS app to edit your plain text files, the best place to start is by perusing writer Brett Terpstra's iTextEditors, an interactive chart of iOS text editors. You can filter by iPhone or iPad apps, syncing options, exporting options, and a range of other features. 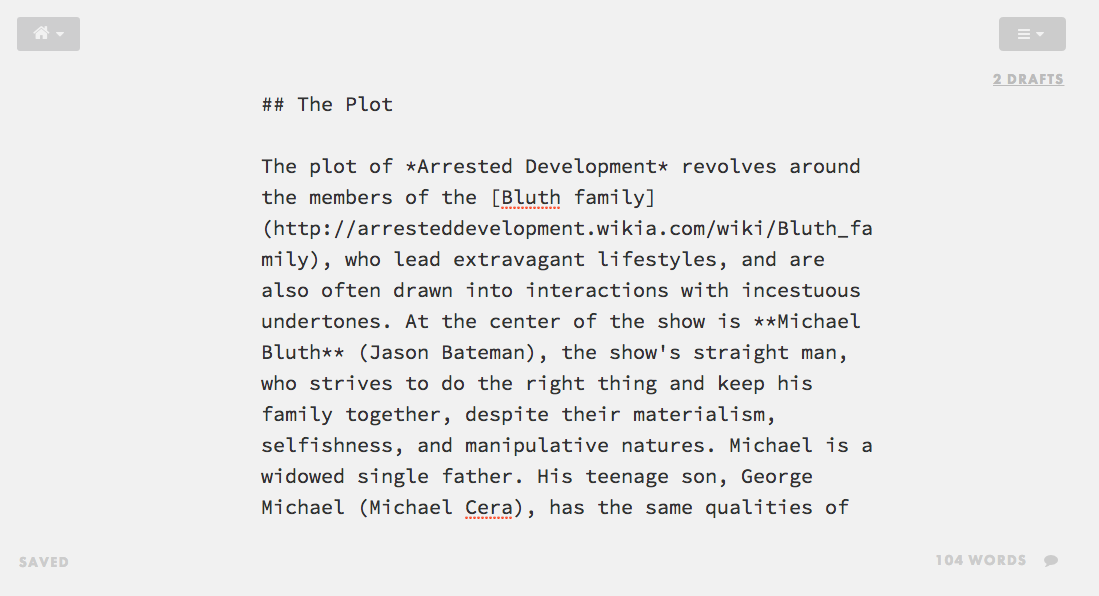 Draft is a web-based text editor with a whole stack of cool features like version control and collaborative editing. It can also export your work as plain text files, so if you wanted to work with Draft but still keep local plain text copies, you can just do regular exports and you'll get the best of both worlds.

The beauty of plain text is that it's incredibly flexible. No doubt you've come up with your own uses for text files to keep you productive. Leave a comment if you've got one that I missed.

You might also enjoy this article: "From the Hipster PDA to Desktop Files: 8 Clever Hacks that Compete with the Modern To-Do App".