Tl;dr: We were seeking an alternative to Secret Santa and came up with Conspiracy Santa, a game in which the entire team works together to "conspire" to get a gift for one teammate.

Christmas is that magical time of the year when you change up your playlist, spend more time with family and friends, eat meal after meal of delicious food and, without fail, purchase an Amazon Prime subscription December 22. It's also the time of the year when companies buy ridiculous "employee gifts"—just Google that for a hilarious yet depressing sampling.

Last December, we decided to do things a little different here at Zapier and conducted a gift-giving experiment of our own. Since it turned out to be a success and we're now preparing for our second year of it, we thought it would be fun to share what we did, why we did it, what worked and what didn't work. And, of course, we'll provide you with the instructions and tools to do it yourself if you'd like!

One well-known alternative to soulless-bulk-gift-giving in your office is Secret Santa. In this tradition, every member of the group is randomly and anonymously assigned to give a gift to another member of the group. Variations include small gifts leading up to December 25 and guessing the name of your "Secret Santa" before receiving the final item.

Since we're a remote team, however, Secret Santa turns out to be a tricky endeavor! We're often hundreds or thousands of miles away from each other, making it difficult to pick up on the important little personal clues that inform solid gift giving. So you're left to choose a gift for another teammate all on your own, emphasizing a solitary aspect for everyone involved—not at all in the spirit of the event. For those reasons, we didn't want to do your vanilla Secret Santa.

We specifically looked for a way to involve everyone when deciding each team member's gift, so we came up with "Conspiracy Santa" to do just that.

Conspiracy Santa is a twist on Secret Santa where instead of an individual, the entire group works together to "conspire" to get a gift for someone. That means for a team of 10, nine people are in a secret email thread that discusses gift ideas for the one person left out of the thread. After a couple dozen emails, a gift is decided, someone purchases it and before long a team gift-opening party is held.

How We Did It

To properly get Conspiracy Santa started, we hit an obstacle: one of us couldn't be solely responsible for sending out every initial email. In order for this to work, someone needed to always be left out of the email thread, including the organizer.

The first option was to split the responsibility between two of us, but that sounded like unneeded complexity. Instead, I opted for spinning up an email script—now found as a standalone Conspiracy Santa email generator app—that sent out the kickoff email to everyone on the team, each with a unique subject line. 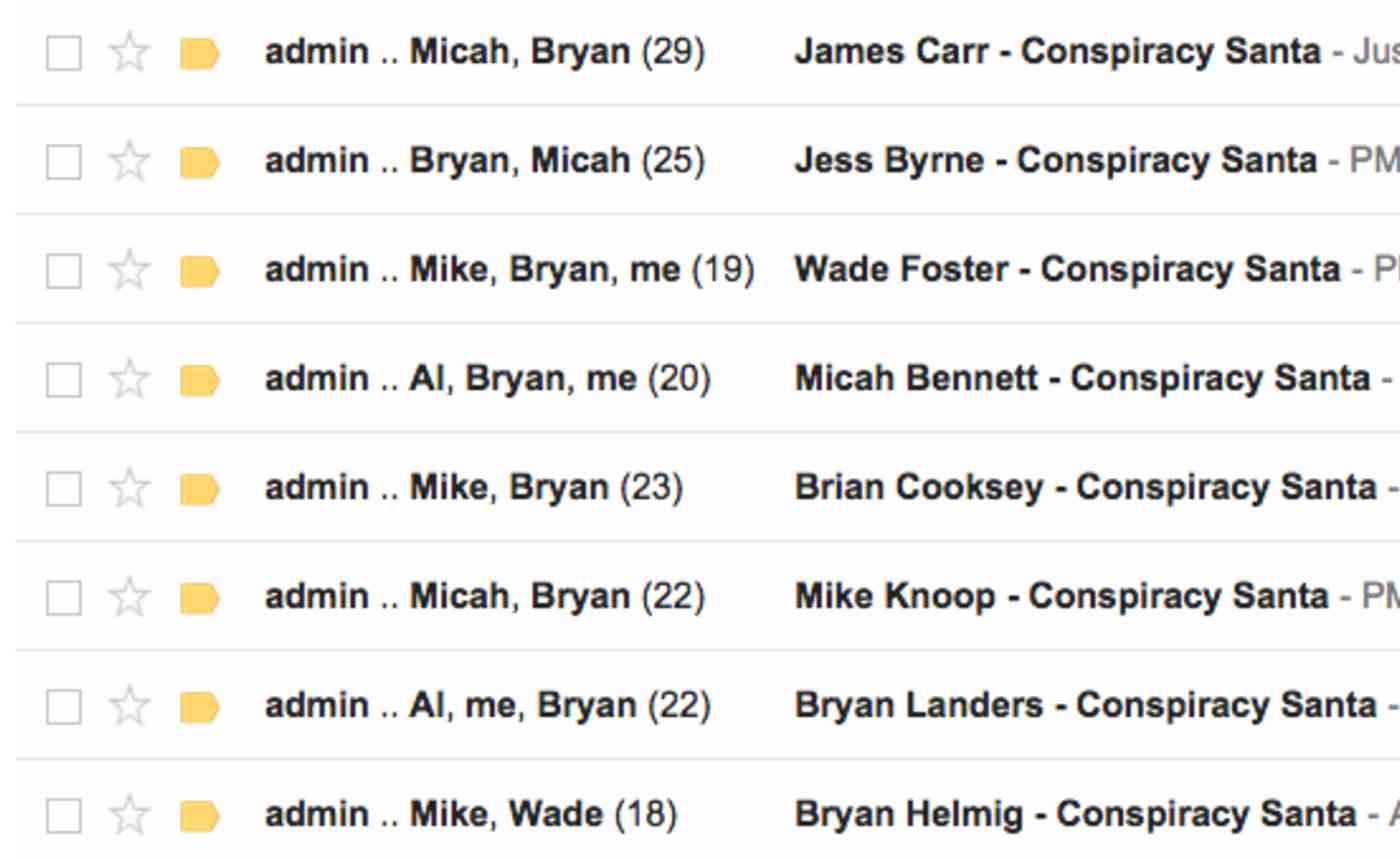 Your mission, should you choose to accept it, is to select the most awesome of gift(s) for Danny Schreiber. The details of the mission are simple:

- Reply-all to share information or cool stories about Danny - Synthesize information and begin discussion of awesome gift ideas - Gift ideas should fall under any of the following: Relevant to their interests; thoughtful or meaningful; funny or cutesy; or just plain cool - Sum value of gift(s) shouldn't be more than ~$100 - Once a consensus is met, a founder will arrange to get said gift(s) - Be careful not to leak the information to Danny, check which thread you are replying to and the To/Cc/Bcc addresses before sending!

Then I personally kicked off each thread—except my own, of course—with a few basic facts.

Things I know about Danny:

- Has a long-term significant other - Went to Creighton University - Might like basketball/sports? I recall hearing him talk up college basketball before - Likes to exercise

Then other team members chipped in facts. This was, unexpectedly, a great way to get to know team members. At around the five-email mark, gift ideas started to be tossed out based on the characteristics we shared.

So for Danny, for example, someone suggested a Fitbit. Then debate ensued. Would Danny like a Fitbit, Jawbone UP or some other exercise tracking device? Until finally, it was put to a vote and decided. At which point, I or another founder stepped in and said, "OK, I'll order it." 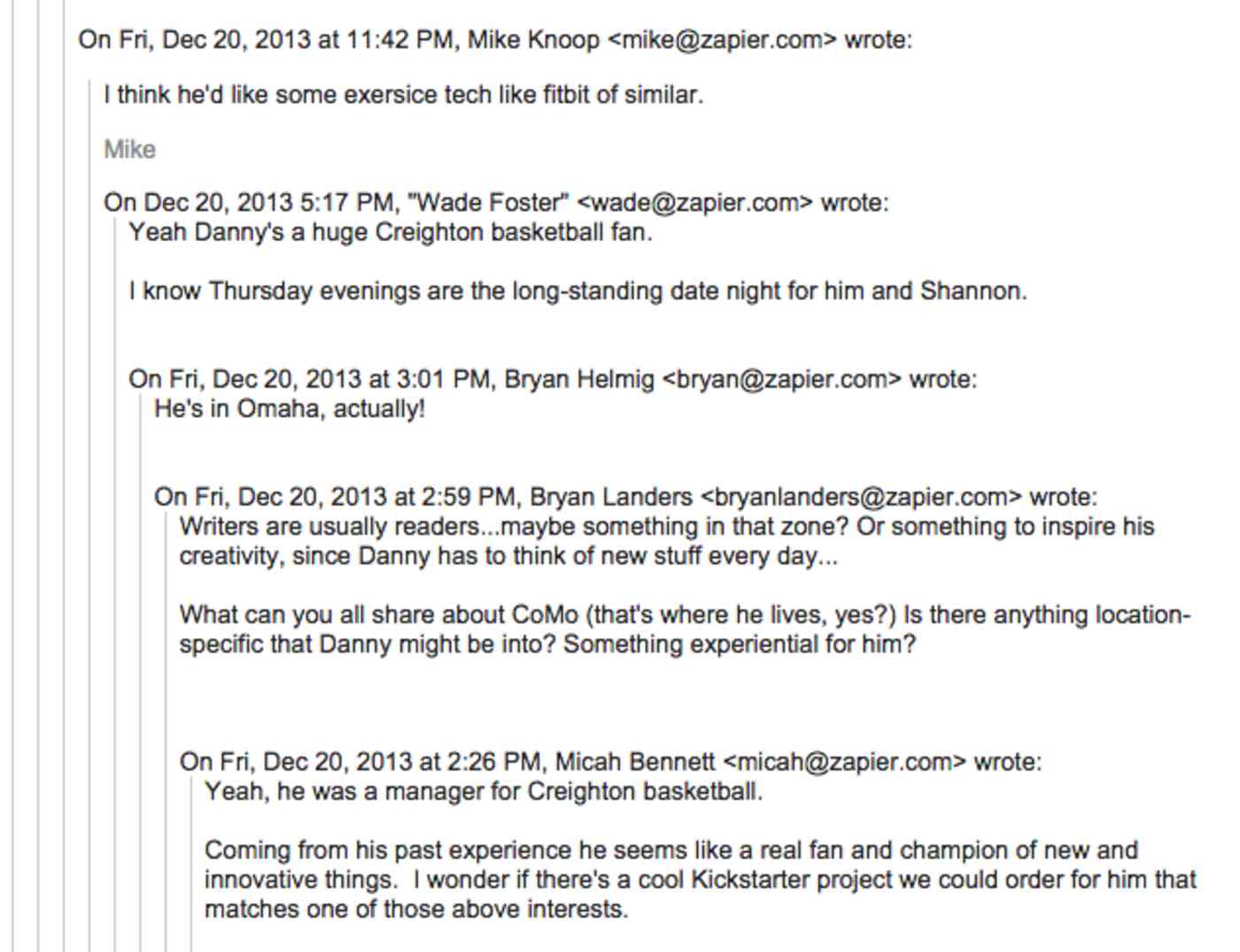 We then waited until we came together for our Christmas party in January to exchange these gifts. Before people opened them, they made hilarious guesses and then were often surprised but always pleased. The especially cool part: everyone had a hand in the gift person was excited about receiving. We also then shared the email threads with the target person, which is when more laughs broke out! 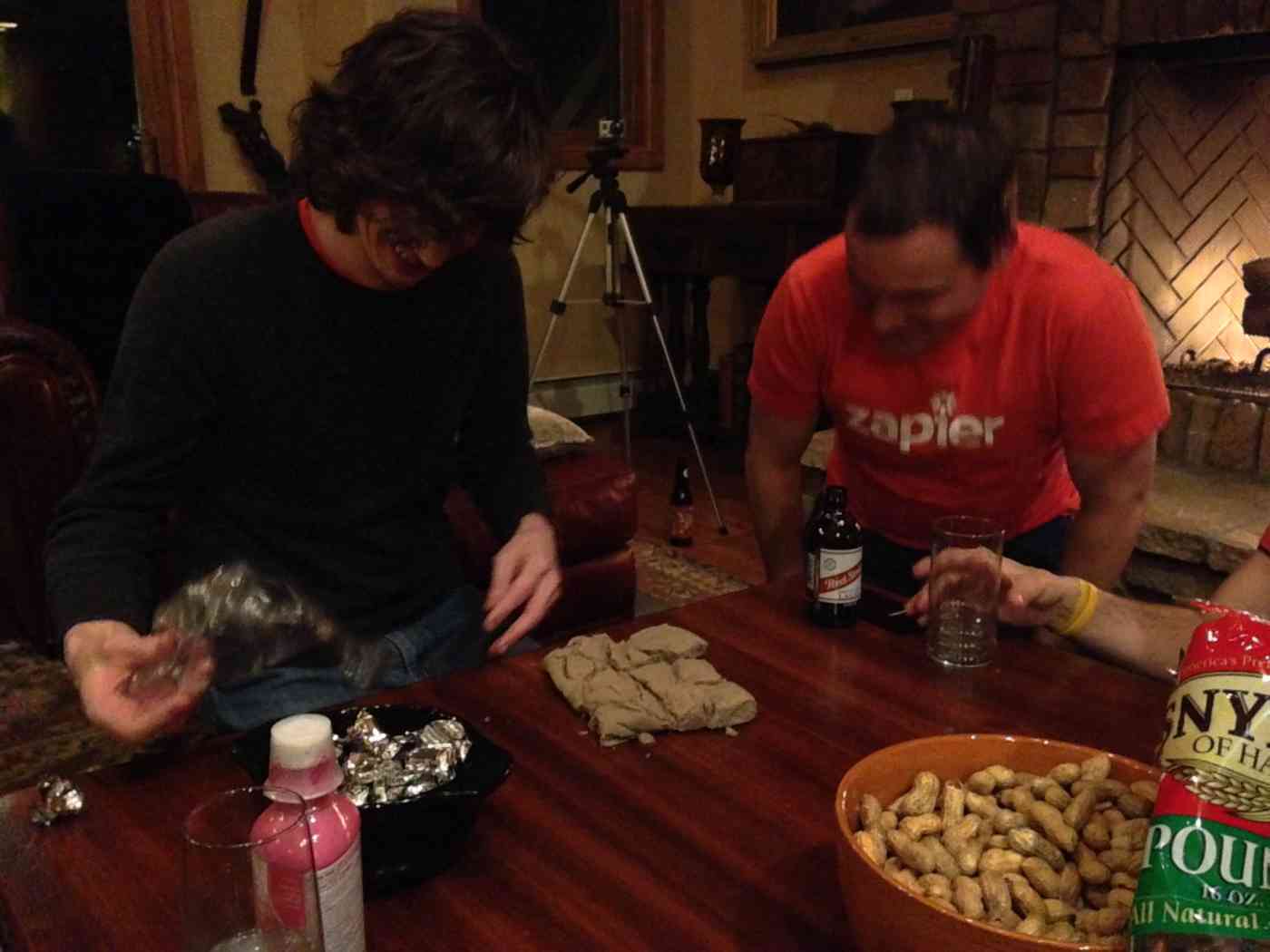 My gift turned out to be kinetic sand, a completely unexpected and delightful surprise.

The days following the gift opening, we kept talking about the fun we had around Conspiracy Santa and about how we were looking forward to it this year. We'll definitely be doing it again, and here's why.

Sure, there were plenty of things that luckily went right the first time, but we took notes on what we need to improve this year, too.

How to Play Conspiracy Santa with Your Team 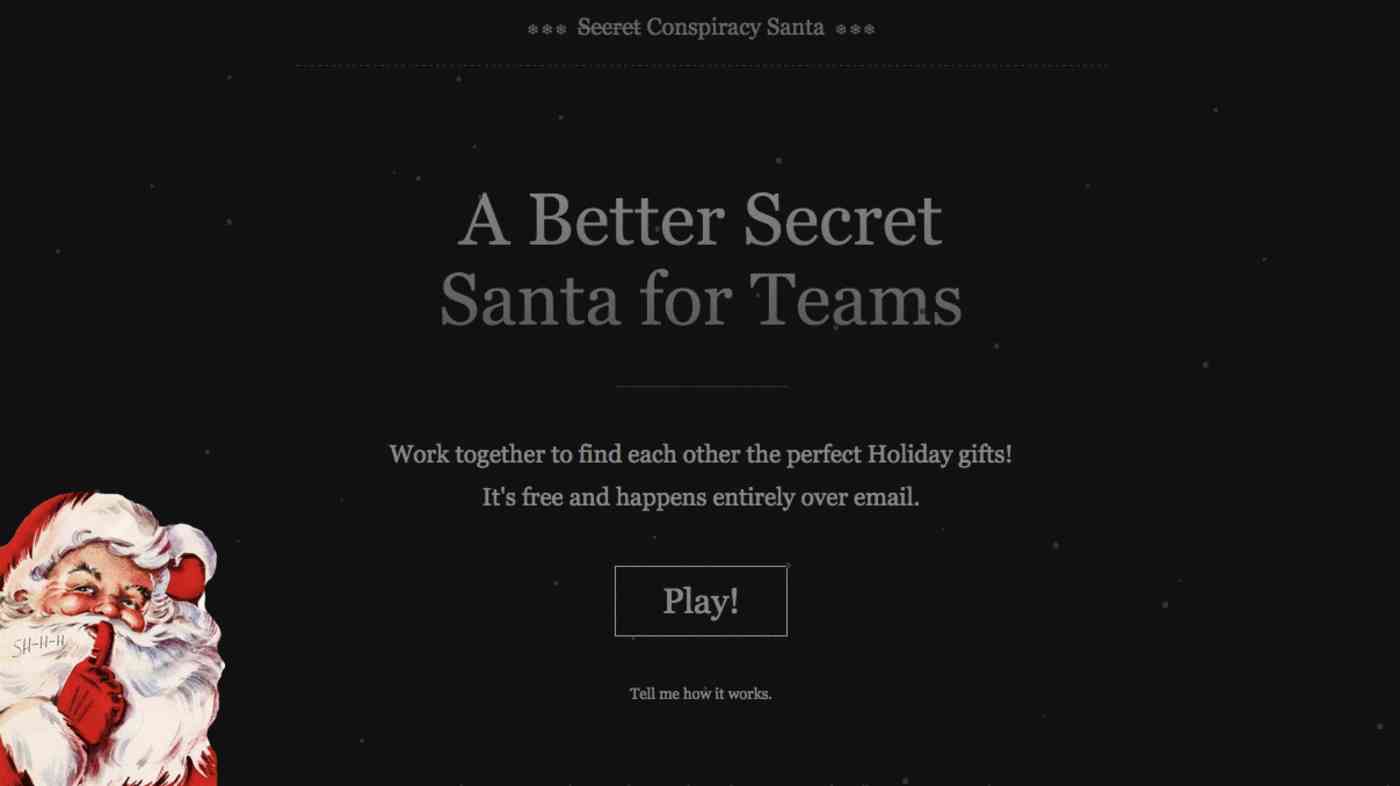 If you dig this idea, here's a quick guide to getting started with Conspiracy Santa at your company.

Remember, this is a new tradition, so variables are welcome!

Let us know in the comments if you give Conspiracy Santa a try, what tweaks you make or what other unique gift exchange traditions you have in your company.

Want in on our Conspiracy Santa game this year? We're hiring!

Bryan Helmig is a co-founder and CTO at Zapier, jazz/blues musician and fine beer and whiskey lover.